The following lists events that happened during 2015 in the Republic of Austria .

Austria, officially the Republic of Austria, is a land-locked country in Central Europe composed of nine federated states (Bundesländer), one of which is Vienna, Austria's capital and its largest city. Each state has its own distinct cultural and linguistic traditions and identity, and its own democratically elected system of government within the federal structure.

The President of Austria is the head of state of the Austrian Republic. Though theoretically entrusted with great power by the Constitution, in practice the President is largely a ceremonial and symbolic figurehead.

Heinz Fischer is a former Austrian politician. He took office as President of Austria on 8 July 2004 and was re-elected for a second and last term on 25 April 2010, leaving office on 8 July 2016. Fischer previously served as minister of science from 1983 to 1987 and as president of the National Council of Austria from 1990 to 2002. A member of the Social Democratic Party of Austria (SPÖ), he suspended his party membership for the duration of his presidency.

The Chancellor of Austria is the head of government of the Austrian Republic. The chancellor chairs and leads the cabinet, which is composed of the Chancellor, the vice chancellor and the ministers. Together with the president, who is head of state, the cabinet forms the country's executive branch leadership.

The Rettenbach glacier is a glacier in Europe, located near Sölden in the Ötztal Alps of Tyrol, Austria. 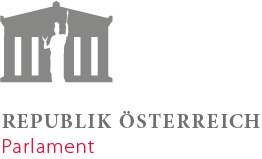 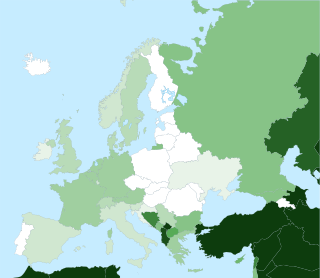 Islam in Austria is the largest minority religion and the second most widely professed religion in the country, practiced by 8% of the total population in 2016 according to the Austrian Academy of Sciences. The majority of Muslims in Austria belong to Sunni denomination. Most Muslims came to Austria during the 1960s as migrant workers from Turkey and Bosnia and Herzegovina. There are also communities of Arab and Afghan origin.

Austria held the 60th Eurovision Song Contest in Vienna between 19 and 23 May. Sweden won.

The Eurovision Song Contest, often simply called Eurovision, is an annual international song competition, with participants representing primarily European countries. Each participating country submits an original song to be performed on live television and radio, then casts votes for the other countries' songs to determine the winner. At least 50 countries are eligible to compete as of 2019; since 2015, Australia has been allowed as an entrant.

Sweden participated in the Eurovision Song Contest 2015 with the song "Heroes", written by Linnea Deb, Joy Deb and Anton Malmberg Hård af Segerstad. The song was performed by Måns Zelmerlöw. Swedish broadcaster Sveriges Television (SVT) organised the national final Melodifestivalen 2015 in order to select the Swedish entry for the 2015 contest in Vienna, Austria. After twenty-eight songs competed in a six-week long process consisting of four semi-finals, a second chance round and a final, "Heroes" performed by Måns Zelmerlöw emerged as the winner after gaining the most points from both an international jury and a public televote.

Sabina Selimovic, and Samra Kesinovic, were two teenaged Austrian nationals who at the height of the ascendancy of the Islamic State of Iraq and the Levant militia's conquests in the Middle East in April 2014, abandoned their family homes in Central Europe and illicitly travelled to Syria to join it. Their actions drew substantial media commentary due to the ongoing media reports of en masse barbarity that the Islamic State forces were engaging in, and raised questions as to why people of European extraction would be drawn to such an entity.

The Islamic State of Iraq and the Levant, also known as the Islamic State of Iraq and Syria, officially known as the Islamic State (IS) and also known by its Arabic-language acronym Daesh, is a Salafi jihadist terrorist organization and a former unrecognised proto-state that follows a fundamentalist, Salafi doctrine of Sunni Islam. ISIL gained global prominence in early 2014 when it drove Iraqi government forces out of key cities in its Western Iraq offensive, followed by its capture of Mosul and the Sinjar massacre.

Izzat Ibrahim al-Douri is a former Iraqi politician and military commander. He served as Vice Chairman of the Iraqi Revolutionary Command Council until the 2003 U.S.-led invasion of Iraq and was regarded as the closest advisor and deputy under former President Saddam Hussein. He leads the Iraqi insurgent Naqshbandi Army. 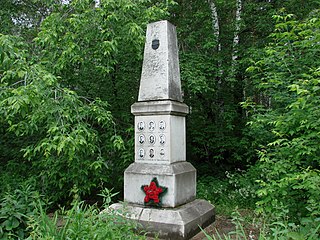 The Dyatlov Pass incident was an event where nine people died in the northern Ural Mountains between the 1 and 2 February 1959, in uncertain circumstances. The experienced trekking group, who were all from the Ural Polytechnical Institute, had established a camp on the slopes of Kholat Syakhl, in an area now named in honor of the group's leader, Igor Dyatlov. During the night, something caused them to tear their way out of their tents and flee the campsite, all while inadequately dressed for the heavy snowfall and sub-zero temperatures.

Abū Bakr al-Baghdadi is the leader of the Islamic State of Iraq and the Levant (ISIL). ISIL has been designated a terrorist organisation by the United Nations, European Union and many individual states, while al-Baghdadi is considered a Specially Designated Global Terrorist by the United States. In June 2014, he was chosen by the majlis al-shura, representing the ahl al-hall wal-aqd of the Islamic State as their caliph.

The People's Protection Units or People's Defense Units is a mainly-Kurdish group in Syria and the primary component of the Syrian Democratic Forces (SDF). The YPG mostly consists of ethnic Kurds, but also includes Arabs and foreign volunteers; it is closely allied to the Syriac Military Council, a militia of Assyrians. The YPG was formed in 2004 as the armed wing of the Kurdish leftist Democratic Union Party. It expanded rapidly in the Syrian Civil War and came to predominate over other armed Kurdish groups. A sister group, the Women's Protection Units (YPJ), fights alongside them. The YPG is active in Northern and Eastern Syria.

Estimates of deaths in the Syrian Civil War, per opposition activist groups, vary between 371,222 and more than 570,000. On 23 April 2016, the United Nations and Arab League Envoy to Syria put out an estimate of 400,000 that had died in the war. Based on Syria's pre-war population of 20.8 million from 2011, this represented approximately 2% of Syria's pre-war population.

Operation al-Shabah was launched in May 2013 by the Iraqi Army, with the stated aim of severing contact between the Islamic State of Iraq and the Levant and the al-Nusra Front in Syria by clearing militants from the border area with Syria and Jordan. 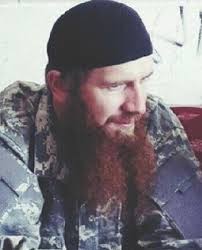 Tarkhan Tayumurazovich Batirashvili, known by his nom de guerreOmar al-Shishani (Arabic: أبو عمر الشيشاني‎, was a Georgian Chechen jihadist who served as a commander for the Islamic State in Syria, and previously as a sergeant in the Georgian Army.

The Adra massacre was the killing of at least 32 Alawite, Christian, Druze and Ismailite civilians in the industrial town of Adra, Syria in December 2013, during the Syrian Civil War. According to the government and activists it was conducted by the al-Nusra Front. The U.S. State Department condemned massacres in Syria and condemned 'the latest report of a massacre of civilians in Adra.'

The Al-Otaiba ambush was a successful military operation conducted on 26 February 2014 by Hezbollah against al-Nusra militants at Al-Otaiba, a village in East Ghouta, near Damascus, Syria. In the ambush, a long, single-file column of alleged al-Nusrah Front fighters were obliterated by multiple, simultaneous IED blasts. They were then targeted by Hezbollah with additional secondary explosions and small-arms fire. Hezbollah received minor support from the Syrian Army in the ambush.

On 18 April 2014, seracs on the western spur of Mount Everest failed, resulting in an ice avalanche that killed sixteen climbing Sherpas in the Khumbu Icefall. This was the same icefall where the 1970 Mount Everest disaster had taken place. Thirteen bodies were recovered within two days, while the remaining three were never recovered due to the great danger of performing such an expedition. Many Sherpas were angered by what they saw as the Nepalese government's meager offer of compensation to victims' families, and threatened a protest or strike. On 22 April, the Sherpas announced they would not work on Everest for the remainder of 2014 as a mark of respect for the victims.

Turkey, which had had a relatively friendly relationship with Syria over the decade prior to the start of the civil unrest in Syria in the spring of 2011, condemned Syrian president Bashar al-Assad over the violent crackdown on protests in 2011 and later that year joined a number of other countries demanding his resignation. In the beginning of the Syrian Civil War, Turkey trained defectors of the Syrian Army on its territory, and in July 2011, a group of them announced the birth of the Free Syrian Army, under the supervision of the Turkish National Intelligence Organisation, which began arming and training them in May 2012., offering them a safe zone and a base of operations. Together with Saudi Arabia and Qatar, Turkey has also provided the rebels with arms and other military equipment. Tensions between Syria and Turkey significantly worsened after Syrian forces shot down a Turkish fighter jet in June 2012, and border clashes erupted in October 2012. On 24 August 2016, the Turkish Armed Forces began a declared direct military intervention into Syria, mainly targeting the People's Protection Units but also the Islamic State of Iraq and the Levant.

The Women's Protection Units or Women's Defense Units is an all-female militia actively fighting in Northern Syria. The YPJ is one of the main two armed forces in Rojava, the other being the People's Protection Units militia, which includes both men and women. While the YPJ, and the YPG in general, is mainly associated with Kurds, the organization also includes other ethnoreligious groups of Northern Syria.

The Vienna peace talks for Syria, as of 14 November 2015 known as the talks of the International Syria Support Group (ISSG), are negotiations of foreign powers that began in Vienna, Austria in October 2015 at the level of foreign ministers, to resolve the conflict in Syria, after unsuccessful previous Syrian peace initiatives.

2013 was the year in which the jihadist group Islamic State of Iraq and the Levant adopted that name. The group expanded its territorial control in Syria and began to do so in Iraq also, and committed acts of terrorism in both countries and in Turkey.