Along with Selena, his other sister Suzette, and his father Abraham, he became a member of Los Dinos in 1980. As a member of Los Dinos, A.B. played bass guitar, produced, and wrote songs for Selena that became successful singles such as "Como la Flor", "Amor Prohibido" and "No Me Queda Más" [1] After Selena's death, he would create the bands Kumbia Kings and Kumbia All Starz.

Abraham Isaac Quintanilla III was born on December 13, 1963 in Toppenish, Washington. [2] He is the oldest child of Abraham Quintanilla Jr. and Marcella Ofelia Quintanilla (née Samora); and the older brother of Suzette Quintanilla and the late Selena Quintanilla. [3] [4] [5] [6] Shortly after he was born, Quintanilla and his parents would move to Lake Jackson, Texas, where he would be raised there and where his two younger sisters were born.

While living in Lake Jackson, Texas, A.B. learned to play the guitar and bass. Alongside Selena, his sister Suzette, and their father, Abraham, he became a member of the successful band Los Dinos. A.B. also became Selena's producer.

A.B.'s sister, Selena, was murdered on March 31, 1995, which greatly devastated him. He helped produce "Como Te Extraño" ("How I Miss You") by Pedro "Pete" Astudillo, which was written for Selena as well as Astudillo's late grandmother. The song earned Astudillo a Premios Lo Nuestro award for Best Song of the Year in 1996. [7]

A.B. Quintanilla later resurfaced in 1999 by creating the Kumbia Kings, which mixed cumbia and pop music. The Kumbia Kings went on an international tour, had several CD releases and participated on such shows as Cristina Saralegui's El Show de Cristina. Quintanilla also produced for such entertainers as Thalía, Alicia Villarreal, Verónica Castro and Cristian Castro.

He produced and arranged the 2004 album, A.B. Quintanilla III Presents Joe Lopez, which includes "Cuando Estoy Contigo" ("When I Am with You") and "Soy Tan Feliz" ("I'm So Happy"), co-written by Quintanilla and Luigi Giraldo.

A.B. Quintanilla left Kumbia Kings in mid-2006. A.B., along with new members and ex-Kumbia Kings Chris Pérez (A.B.'s brother-in-law, Selena's widower) and Pee Wee; started the group Kumbia All Starz in 2006. This new group had hits such as "Chiquilla", "Parece Que Va a Llover", and "Speedy Gonzales". The Kumbia All Starz have become immensely popular in South America, especially in Bolivia, where they performed a series of concerts in 2014.

Quintanilla has eight children, including a son Svani (b. 1991) and a daughter Martika (b. 1989) with his first wife Vangie. Quintanilla also has five other sons and one daughter born between 2002 and 2007. [10] He also has one grandchild.

He married his longtime girlfriend Rikkie Leigh Robertson on November 12, 2011. [11] On July 5, 2016, he announced after a concert that he was getting divorced from his wife. They have no children together.

Albums with Kumbia All Starz

The Kumbia Kings were a Mexican-American cumbia group from Corpus Christi, Texas, created by A.B. Quintanilla. Their music encompasses the styles of cumbia, hip hop, and R&B. They produce songs in both Spanish and English. The band's producers from the beginning have been Quintanilla and Cruz Martínez. Quintanilla is the brother of the late "Queen of Tejano", Selena. Quintanilla played bass guitar for the group, while Martínez, husband of international artist Alicia Villarreal, played keyboards. Both co-wrote songs for the Kumbia Kings. Though the group has gone through a revolving door of members in recent years amid controversy and finger-pointing, and the Kumbia Kings of today are vastly different from what originated in Corpus Christi over eight years ago, Quintanilla and Martínez were always the soul of the group. Gone are original members Frankie J and DJ Kane, both of whom have gone on to significant success as solo artists, as well as the group K1, a collaboration of founding members of Kumbia Kings who have defected from the group for reason of "internal dissension". Quintanilla, Irvin "Pee Wee" Salinas, as well as Selena's widower Chris Pérez, also decided to leave the group due to that same "internal dissension" and joined Los Kumbia All Starz, formed by A.B. Quintanilla. Martínez kept what was left of Los Kumbia Kings and formed his own group Los Super Reyes with the remaining members. In October 2009, Quintanilla and Martínez solved their differences, and announced that the Kumbia Kings would reunite for a series of concerts lasting from late 2009 through early 2010. 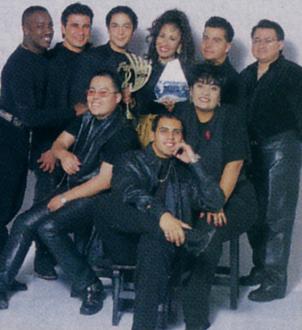 Selena y Los Dinos was an American Tejano band formed in 1981 by Tejano singer Selena and her father Abraham Quintanilla. The band remained together until the murder of Selena in 1995, which caused the dissolution of the band in the same year. When Selena was signed with EMI Latin, EMI president José Behar told Selena that "the world wanted Selena, not Selena y Los Dinos." Selena then began releasing her solo studio albums under her name and her own logo title Selena instead of Selena y Los Dinos. Before Selena was signed with EMI, the band had sold more than 80,000 copies in the state of Texas. 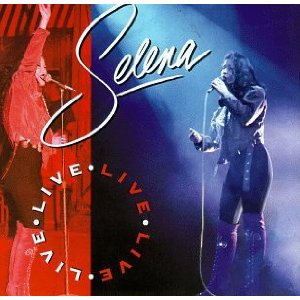 Live! or Selena Live! is a live album by American Tejano pop singer Selena, which was released on May 4, 1993 by EMI Latin. The album was re-released on September 22, 2002 as being part of the Selena: 20 Years of Music collection; which included spoken liner notes by her family, friends and her former band members Selena y Los Dinos. Live! includes three cumbia-influenced studio tracks, while the rest of the album consists of live versions of previously released songs. The album was recorded during a free concert at the Memorial Coliseum in Corpus Christi, Texas, on February 7, 1993. It was certified gold by the Recording Industry Association of America in its first year, double platinum in 1995, and gold (standard) in 2002.

Selena ¡VIVE! was a benefit concert which was held on the tenth anniversary of the death of Tejano superstar Selena Quintanilla-Pérez. The concert was held on April 7, 2005 at the Reliant Stadium in Houston, Texas with over 70,000 attendees. The special was produced and filmed by the Spanish language network, Univision, and was the most-watched special in the Spanish language in the history of American television. 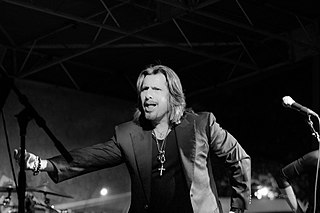 PedroAstudillo is an American singer and songwriter. He was a backup vocalist for Selena y Los Dinos and has released several albums as a solo artist. 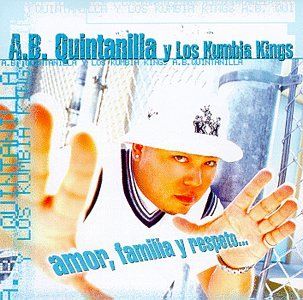 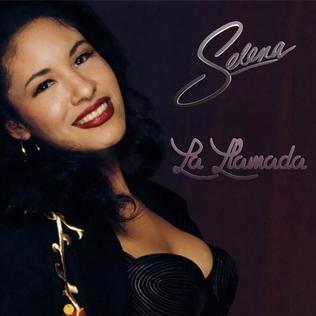 "La Llamada" is a song recorded by American recording artist Selena for her first live album Live! (1993). It was composed by Selena y Los Dinos backup singer Pete Astudillo and Selena's brother and principal record producer A.B. Quintanilla III and produced by Quintanilla III and Argentine music producer Bebu Silvetti. "La Llamada" was released as the second single from Live!. "La Llamada" is an uptempo Mexican cumbia song centering on female empowerment. Lyrically, the song sees Selena break up with her cheating boyfriend over the phone. 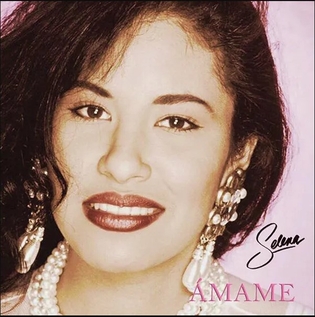 "Ámame" is a song by American singer Selena, taken from her third studio album, Entre a Mi Mundo (1992). Selena and Chris Pérez began secretly dating after Pérez rejoined Selena y Los Dinos in the summer of 1991, despite her father's objections. The song was written by Selena, penned about her feelings toward Pérez while hiding their relationship from their family. Pete Astudillo provided songwriting assistance for the song, while A. B. Quintanilla handled production. It was released as the fourth and final single from the album in April 1993. 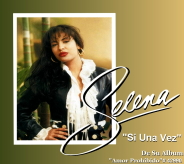 "Si Una Vez" is a song recorded by American recording artist Selena for her fourth studio album, Amor Prohibido (1994). It was written by Pete Astudillo and produced by Selena's brother-producer A.B. Quintanilla. "Si Una Vez" is a mariachi fusion song and draws influence from cumbia and Latin dance music. Lyrically, Selena questions why she ever fell in love with an abusive partner, saying she will never repeat her mistakes. The lyrics suggest unrequited love and female empowerment. 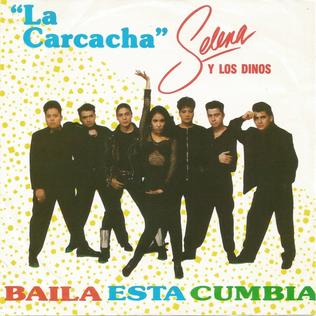 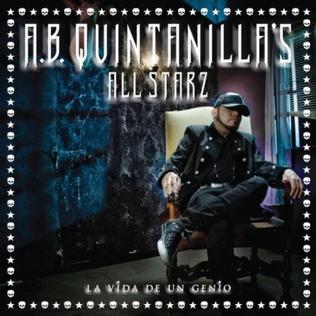 La Vida de un Genio is the third studio album by Mexican-American cumbia group A.B. Quintanilla y Los Kumbia All Starz and the seventh studio album by Mexican-American musician A.B. Quintanilla. It was released on July 27, 2010 by EMI Latin and Capitol Latin. A digital deluxe edition containing interviews by A.B. Quintanilla about the songs and two versions of "Hipnótika" was also released on the same day on online music stores. A bonus song called "I'll Be There for You" is only included on the iTunes digital deluxe edition.

"Piña Colada Shot" is a song by Mexican-American cumbia group A.B. Quintanilla y Los Kumbia All Starz. It was released on January 27, 2017, as the first single from his ninth studio album Elektro Kumbia (2017). The song is a cover medley of past songs "El Africano", "La Chula", and "Vamos Pa' la Conga".