Agincourt or Matsavana is a town in Bushbuckridge Local Municipality in the Mpumalanga province of South Africa. 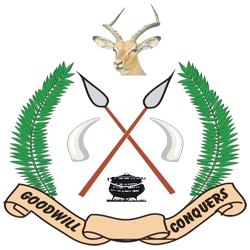 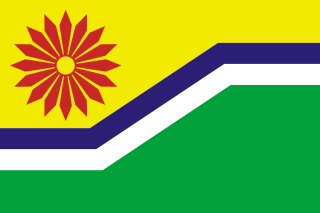 Mpumalanga is a province of South Africa. The name means "east", or literally "the place where the sun rises" in the Swazi, Xhosa, Ndebele and Zulu languages. Mpumalanga lies in eastern South Africa, bordering Swaziland and Mozambique. It constitutes 6.5% of South Africa's land area. It shares borders with the South African provinces of Limpopo to the north, Gauteng to the west, the Free State to the southwest, and KwaZulu-Natal to the south. The capital is Mbombela (Nelspruit).

To the west of Agincourt lies the Kruger National Park. The MRC/Wits Rural Public Health and Health Transitions Research Unit is based in Agincourt.

Kruger National Park is one of the largest game reserves in Africa. It covers an area of 19,485 square kilometres (7,523 sq mi) in the provinces of Limpopo and Mpumalanga in northeastern South Africa, and extends 360 kilometres (220 mi) from north to south and 65 kilometres (40 mi) from east to west. The administrative headquarters are in Skukuza. Areas of the park were first protected by the government of the South African Republic in 1898, and it became South Africa's first national park in 1926.

The Medical Research Council (MRC) is responsible for co-coordinating and funding medical research in the United Kingdom. It is part of United Kingdom Research and Innovation (UKRI), which came into operation 1 April 2018, and brings together the UK’s seven research councils, Innovate UK and Research England. UK Research and Innovation is answerable to, although politically independent from, the Department for Business, Energy and Industrial Strategy.

Uruguaiana is a municipality in the Brazilian state of Rio Grande do Sul. It is located on the left-hand (eastern) shore of the Uruguay River that forms the border with Argentina. Opposite Uruguaiana, and joined to it by a road/railway bridge, lies the Argentine city of Paso de los Libres, Corrientes. North of Uruguaiana lies the Brazilian municipality of Itaqui, connected by a bridge constructed by the English in 1888 over the Ibicuí River. The municipality also borders the municipalities of Alegrete, Barra do Quaraí and Quaraí, and, also, Uruguay, making it one of the few international triple-border municipalities of Brazil.

The Medical Reserve Corps (MRC) is a network in the U.S. of community-based units initiated and established by local organizations to meet the public health needs of their communities. It is sponsored by the Office of the Assistant Secretary for Preparedness and Response (ASPR). The MRC consists of medical and non-medical volunteers who contribute to local health initiatives, such as activities meeting the Surgeon General's priorities for public health, and supplement existing response capabilities in time of emergency. The MRC provides the structure necessary to pre-identify, credential, train, and activate medical and public health volunteers.

The Institute of Psychiatry, Psychology and Neuroscience (IoPPN) is a research institution dedicated to discovering what causes mental illness and diseases of the brain. In addition, its aim is to help identify new treatments for them and ways to prevent them in the first place. The IoPPN is a school of King's College London, England, previously known as Institute of Psychiatry (IoP).

The National Survey of Health & Development is a Medical Research Council (MRC) longitudinal survey of people born in Britain in March 1946. It is "the longest continually running major birth cohort study in the world and is one of the longest-running studies of human development. "

The Cognition and Brain Sciences Unit is a branch of the UK Medical Research Council, based in Cambridge, England. The CBSU is a world-leading centre for cognitive neuroscience, with a mission to improve human health by understanding and enhancing cognition and behaviour in health, disease and disorder. It is one of the largest and most long-lasting contributors to the development of psychological theory and practice.

Developed by Carstairs and Morris (1991), the Carstairs index is an index of deprivation used in spatial epidemiology to identify Socio-economic confounding. Developed for Scotland it was an alternative to the Townsend Index of deprivation to avoid the use of households as denominators. The Carstairs index is based on four Census variables: low social class, lack of car ownership, overcrowding and male unemployment and the overall index reflects the material deprivation of an area, in relation to the rest of Scotland. Carstairs indices are calculated at the postcode sector level, with average population sizes of approximately 5,000 persons.

Tomaszów Lubelski County is a unit of territorial administration and local government (powiat) in Lublin Voivodeship, eastern Poland, on the border with Ukraine. It was established on January 1, 1999, as a result of the Polish local government reforms passed in 1998. Its administrative seat and largest town is Tomaszów Lubelski, which lies 107 kilometres (66 mi) south-east of the regional capital Lublin. The only other towns in the county are Tyszowce, lying 28 km (17 mi) north-east of Tomaszów, and Łaszczów, lying 25 km (16 mi) east of Tomaszów.

Sokółka County is a unit of territorial administration and local government (powiat) in Podlaskie Voivodeship, north-eastern Poland, on the border with Belarus. It was created on 1 January 1999 as a result of the Polish local government reforms passed in 1998. Its administrative seat and largest town is Sokółka, which lies 39 kilometres (24 mi) north-east of the regional capital Białystok. The county also contains the towns of Dąbrowa Białostocka, lying 30 km (19 mi) north of Sokółka, Krynki, lying 24 km (15 mi) south-east of Sokółka, and Suchowola, 33 km (21 mi) north-west of Sokółka. 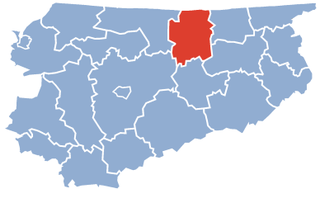 Kętrzyn County is a unit of territorial administration and local government (powiat) in Warmian-Masurian Voivodeship, northern Poland, on the border with Russia. It came into being on January 1, 1999, as a result of the Polish local government reforms passed in 1998. Its administrative seat and largest town is Kętrzyn, which lies 88 kilometres (55 mi) north-east of the regional capital Olsztyn. The county also contains the towns of Reszel, lying 16 km (10 mi) west of Kętrzyn, and Korsze, 19 km (12 mi) north-west of Kętrzyn.

The School of Clinical Medicine is the medical school of the University of Cambridge in England. According to the QS World University Rankings 2016, it ranks as the 3rd best medical school in the world. The school is co-located with Addenbrooke's Hospital on the Cambridge Biomedical Campus.

The Cambridge Biomedical Campus is the largest centre of medical research and health science in Europe. Located at the southern end of Hills Road in Cambridge, England the campus is managed by the University of Cambridge. The site is funded by organisations such as the Cambridge University Hospitals NHS Foundation Trust, the Wellcome Trust, Cancer Research UK, the UK government's Medical Research Council and has National Institute for Health Research Biomedical Research Centre status. It is an accredited UK academic health science centre and home to Addenbrooke's Hospital and the university's medical school.

The MRC Mitochondrial Biology Unit is a department of the School of Clinical Medicine at the University of Cambridge, funded through a strategic partnership between the Medical Research Council and the University. It is located at the Addenbrooke’s Hospital / Cambridge Biomedical Campus site in Cambridge, England. The unit is concerned with the study of the mitochondrion, as this organelle has a varied and critical role in many aspects of eukaryotic metabolism and is implicated in a large number of metabolic, degenerative, and age-related human diseases.

Myanmar Red Cross Society (MRCS) was founded in 1937 and it was earlier called Burma Red Cross. It has its headquarters in Yangon.

MRC Human Nutrition Research was the largest research institute in the UK for human nutrition, and was based in Cambridge.

Dame Sally Macintyre DBE FRSE FMedSci is a Scottish medical sociologist. She is a Professor Emeritus at the University of Glasgow.

The College of Medicine and Veterinary Medicine is one of the three colleges of the University of Edinburgh.

Nita Gandhi Forouhi is a British physician and academic, specialising in nutrition and epidemiology. She is Professor of Population Health and Nutrition at the University of Cambridge, the programme leader of the nutritional epidemiology programme of its MRC Epidemiology Unit, and an honorary consultant public health physician with Public Health England.

The Nuffield Department of Population Health of Oxford University is located at the Old Road Campus in Headington, Oxford, England. It is one of the largest departments within Oxford University's Medical Sciences Division. The head of department is Professor Sir Rory Collins.