The Alameda Theatre is an Art Deco movie theatre built in 1932 in Alameda, California. It opened with a seating capacity of 2,168. It was designed by architect Timothy L. Pflueger and was the last grand movie palace built in the San Francisco Bay Area. It closed in the 1980s as a triplex theatre and was later used as a gymnastics studio. A restoration and expansion project was completed in 2008, making the historic theater the primary anchor of an eight-screen multiplex. [1] 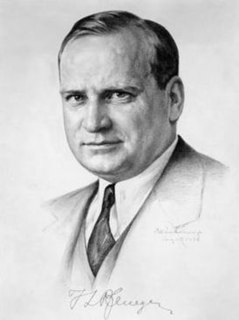 Timothy Ludwig Pflueger was a prominent architect, interior designer and architectural lighting designer in the San Francisco Bay Area in the first half of the 20th century. Together with James R. Miller, Pflueger designed some of the leading skyscrapers and movie theaters in San Francisco in the 1920s, and his works featured art by challenging new artists such as Ralph Stackpole and Diego Rivera. Rather than breaking new ground with his designs, Pflueger captured the spirit of the times and refined it, adding a distinct personal flair. His work influenced later architects such as Pietro Belluschi.

The Castro Theatre is a popular San Francisco movie palace which became San Francisco Historic Landmark #100 in September 1976. Located at 429 Castro Street, in the Castro district, it was built in 1922 with a Spanish Colonial Baroque façade that pays homage—in its great arched central window surmounted by a scrolling pediment framing a niche—to the recently rebuilt basilica of Mission Dolores nearby. Its designer, Timothy L. Pflueger, also designed Oakland's Paramount Theater and other movie theaters in California in that period. The theater has over 1,400 seats. The theater's ceiling is the last known leatherette ceiling in the United States and possibly the world. Another leatherette ceiling was demolished just a few years ago. To make the ceiling look as though it is leather requires a special technique regarded as lost today. 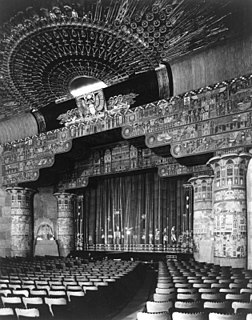 Grauman's Egyptian Theatre is a historic movie theater located at 6706 Hollywood Blvd. in Hollywood, California. Opened in 1922, it's an early example of a lavish movie palace and is noted as having been the site of the first-ever Hollywood film premiere. Since 1998, it has been owned and operated by the American Cinematheque film archive.

A movie palace is any of the large, elaborately decorated movie theaters built between the 1910s and the 1940s. The late 1920s saw the peak of the movie palace, with hundreds opened every year between 1925 and 1930. With the advent of television, movie attendance dropped and many movie palaces were razed or converted into multiple screen venues or performing arts centers. 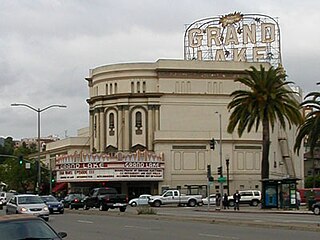 The Grand Lake Theatre is a historic movie palace located at 3200 Grand Avenue and Lake Park Avenue in the Grand Lake neighborhood of Oakland, California.

Broadway is a major thoroughfare in central Los Angeles and Los Angeles County, southern California. The Broadway Theater District in Downtown Los Angeles is the first and largest historic theater and cinema district listed on the National Register of Historic Places.

The Posey tube and the Webster Street tube are two parallel underwater tunnels connecting the cities of Oakland and Alameda, California, running beneath the Alameda–Oakland Estuary. Both are immersed tubes, constructed by sinking precast concrete segments to a trench in the Estuary floor, then sealing them together to create a tunnel. The Posey tube carries Oakland-bound traffic under the Estuary, while the Webster tube carries traffic bound for Alameda. 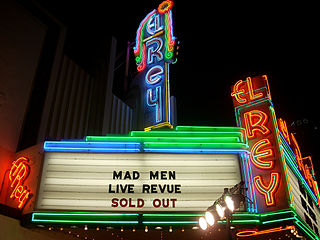 The El Rey Theatre is a live music venue in the Miracle Mile area of the Mid-Wilshire region in Los Angeles, California.

Walter J. Mathews was an American architect based in Oakland, California. He was a native of Markesan, Wisconsin. He is best known for designing the First Unitarian Church of Oakland and the Oakland mansion of Frank M. "Borax" Smith.

Alameda Municipal Power is a municipal utility serving the City of Alameda, California. Founded in 1887, it provides electricity to c. 34,000 residential, commercial, and municipal customers at rates up to 20 percent below neighboring communities. The first engineer at the plant was HP Nielsen. 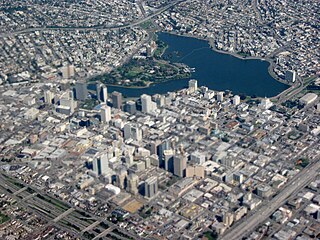 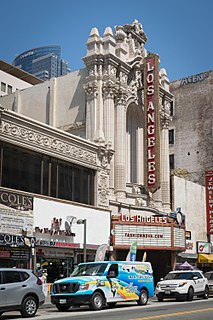 The Los Angeles Theatre is a 2,000-seat historic movie palace at 615 S. Broadway in the historic Broadway Theater District in Downtown Los Angeles.

The Fox Theater, Westwood Village, also known as the Fox Village Theater, is a historic, landmark cinema in Westwood, Los Angeles, California, in the Westwood Village. It is located in the heart of Westwood and only a couple of minutes from UCLA. It is currently operated by Regency Theaters under the name Regency Village Theater. The theater has been one of the leading film premiere theaters in the history of cinema.

The Grand Riviera Theater was a movie palace theater located at 9222 Grand River Avenue in western Detroit, Michigan. It took its name from Grand River Avenue. It was designated a Michigan State Historic Site in 1980, and listed on the National Register of Historic Places in 1982, but was subsequently demolished in June, 1996.

The Masonic Temple and Lodge are two adjacent Masonic buildings in downtown Alameda, California. The older Masonic Temple at 1329–31 Park St was built from 1890 to 1891. The building was designed in the Victorian Eclectic style and features brick pier which extend above the roof line, a tower on the south side of the roof, and an arched stone entrance with carved doors.

Alameda Island is an island in the San Francisco Bay in California. It is south and west of, and adjacent to Oakland, and across the bay eastward from San Francisco. Located on the island is most of the city of Alameda, a city in Alameda County. Also located on the island is the Naval Air Station Alameda, a defunct naval air station, as well as a small uninhabited part of San Francisco. The island was originally a peninsula and a part of Oakland, and is now separated from the mainland by the Oakland Estuary. The island is connected to the mainland by four bridges: the Park Street Bridge, Fruitvale Bridge, High Street Bridge, and Bay Farm Island Bridge. The Posey and Webster Street tubes also connect Oakland to Alameda Island.

The following is a timeline of the history of the city of Oakland, Alameda County, California, United States. 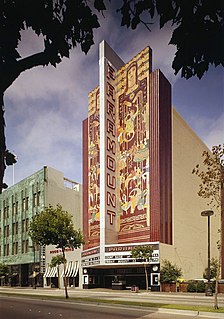 The Paramount Theatre is a 3,040-seat Art Deco concert hall located at 2025 Broadway in Downtown Oakland. When it was built in 1931, it was the largest multi-purpose theater on the West Coast, seating 3,476. Today, the Paramount is the home of the Oakland East Bay Symphony and the Oakland Ballet, it regularly plays host to R&B, jazz, blues, pop, rock, gospel, classical music, as well as ballets, plays, stand-up comedy, lecture series, special events, and screenings of classic movies from Hollywood's Golden Era.

The Fox Oakland Theatre is a 2,800-seat concert hall, a former movie theater, located at 1807 Telegraph Avenue in Downtown Oakland. It originally opened in 1928, running films until 1970. Designed by Weeks and Day, the theatre is listed on the National Register of Historic Places. It was refurbished in the 2000s and reopened as a concert venue on February 5, 2009.