The Croll Building, in Alameda, California, was the site of Croll's Gardens and Hotel, famous as training quarters for some of the greatest fighters in boxing history from 1883 to 1914. James J. Corbett, Bob Fitzsimmons, Jim Jefferies, Jack Johnson, and many other champions all stayed and trained here.

James John Corbett was an American professional boxer and a World Heavyweight Champion, best known as the man who defeated the great John L. Sullivan. Despite a career spanning only 20 bouts, Corbett faced the best competition his era had to offer; squaring off with a total of 9 fighters who would later be enshrined alongside him in the International Boxing Hall of Fame.

Today this building is home to 1400 Bar & Grill. The stained glass, elaborate etched windows, and carved wooden bar remain as they were when Neptune Beach was a popular attraction. 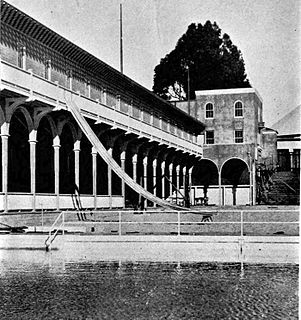 The building is registered as California Historical Landmark [2] and is listed on the National Register of Historic Places (NPS-82000960). It is located at the corner of Webster Street and Central Avenue. A large "Croll's" neon sign marks the location.

California Historical Landmarks (CHLs) are buildings, structures, sites, or places in the U.S. state of California that have been determined to have statewide historical landmark significance.

The Angels Hotel in Angels Camp, California, was the hotel where the author Mark Twain heard a story that he would later turn into his short story "The Celebrated Jumping Frog of Calaveras County". 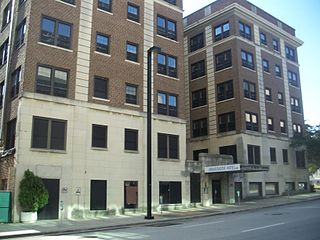 The 310 West Church Street Apartments, also known as the Ambassador Hotel, is a historic building located at 420 North Julia Street in Jacksonville, Florida, United States. On April 7, 1983, it was added to the U.S. National Register of Historic Places. 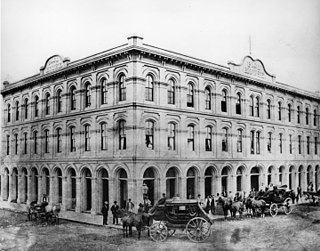 The Pico House is a historic building in Los Angeles, California, dating from its days as a small town in Southern California. Located on 430 North Main Street, it sits across the old Los Angeles Plaza from Olvera Street and El Pueblo de Los Angeles Historic Monument.

The Paris Elks Lodge No. 812 Building is a historic building located at 111 E. Washington St. in Paris, Illinois. The building served as a meeting place for the Paris lodge of the Benevolent and Protective Order of Elks. The building was constructed in 1927, 25 years after the Paris Lodge was chartered. Architect Everett Blackman, a member of the lodge, designed the building in the Mediterranean Revival style. Blackman's design features an arcade loggia enclosing the front entrance and a square tower with a parapet roof designed to resemble elk antlers. The building's amenities included a bar and ballroom on the second floor, a bowling alley in the basement, and meeting rooms for the lodge. The third floor of the building housed rooms for the adjacent France Hotel; it was connected to the hotel by a stone walkway and cannot be accessed from the lower floors. The Elks used the building until the lodge filed for bankruptcy in 1978.

The Westin San Jose, formerly The Sainte Claire Hotel is a six-story historic hotel in downtown San Jose, California, one of the city's most recognized architectural landmarks. It was built in 1926 and is listed on the National Register of Historic Places. 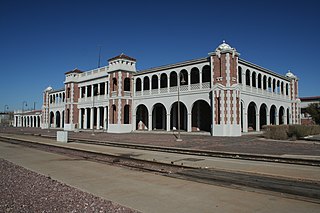 The Ramona Street Architectural District, in downtown Palo Alto, California, is a Registered Historic District. This portion of the street, between University Avenue and Hamilton Avenue, is a highly distinctive business block. It showcases the Spanish Colonial and Early California styles with gentle archways, wrought iron work, tile roofs of varying heights and courtyards.

The Hotel Alder, is an historic five-story building in downtown Portland, Oregon, United States. In 2004, it was named to the National Register of Historic Places. It has also been known as the Hotel President, the Jack London Hotel, and Century Plaza. The ground floor is occupied by the popular Rialto Poolroom Bar and Cafe and an off-track betting parlor which was sold to new owners in December 2016.

The Big Four House is a historic 19th-century building in Downtown Sacramento, California. It is now located within Old Sacramento State Historic Park and the Old Sacramento National Historic District.

The Wort Hotel was built in downtown Jackson, Wyoming, United States by brothers John and Jess Wort, who were significant figures in the transformation of the economy of Jackson Hole from ranching to tourism. The somewhat Tudor-style building was the first luxury hotel in Jackson. The two-story building features brick facing, with half-timbering and stucco on the second floor and a series of gables facing the street.

The Cornelius Hotel is a hotel building in downtown Portland, Oregon, United States that is listed on the National Register of Historic Places. It was designed by John V. Bennes's firm, and constructed in 1907–08. Its original period of use as a hotel had ended by the 1950s. A fire in 1985 left the top three floors uninhabitable. By the early 1990s the building had been vacated, and it then stood out of use for more than two decades. In 2016–2018, it was joined to the adjacent Woodlark Building, extensively renovated, and converted into a hotel. Named Woodlark House of Welcome, the hotel was scheduled to open on December 15, 2018. 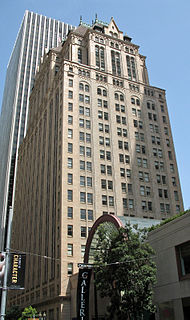 The Hunter–Dulin Building is a class A office building located at 111 Sutter Street in San Francisco, California.

The Northwestern Hotel is an historic building located in the East Village of Des Moines, Iowa, United States. It was listed on the National Register of Historic Places in 1984.

Touchdown Tavern, formerly Roper Hotel or Roper's City Hotel, is a restaurant and bar in a historic hotel building in the Second Empire style at 125 East Main Street in Reedsburg, Wisconsin, United States. The two-storey red brick structure with stone trim and a mansard roof was designed by Edward M. Hackett and constructed in 1886 for $10,000. It includes arched window frames, brick detailing on the facade and a small porch with ornamental metal balustrade on the second floor. It was listed on the National Register of Historic Places for Wisconsin in 1984. It was built for the Reedsburg Building & Lumber Co. 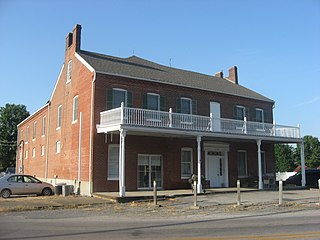 The Rutter Store is a historic commercial building located at 7346 Illinois Route 15 in St. Libory, Illinois. Merchant and German immigrant Heinrich Rutter constructed the building in 1849 as a general store. The building became a commercial and social center for St. Libory, as it house a variety of other businesses in addition to the village's main store. The St. Libory post office became part of the building in 1856 and remained there until 1990, when it moved to a new building. Rutter operated a hotel and a bar in the building from the late 1850s until World War I, and a doctor's office occupied the second floor during the 1870s. The general store closed in 1986, and the building was later converted to a restaurant.

The U.S. Post Office, also known as the Napa Franklin Station, is the main post office serving Napa, California. The post office was built in 1933 with funding from the Public Works Administration. Architect William H. Corlett designed the Art Deco building. The front facade of the building has three sections; the central section has six bays divided by piers with terra cotta capitals. A terra cotta cornice adorned with ram and cow heads tops the central section. The side sections, which contain the building's two entrances, feature panels with decorative eagle designs above the doorways and urn-shaped bronze light fixtures on either side. The post office's lobby features a painted bas-relief plastic ceiling, unusual in federally constructed post offices, and a terrazzo floor. 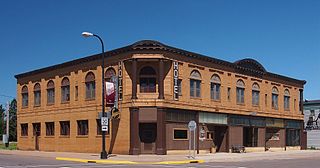 The Spina Hotel is a historic former hotel building in Ironton, Minnesota, United States. It was built in 1913 with multiple commercial spaces and grandly designed architecture. The building was listed on the National Register of Historic Places in 1980 for having local significance in the themes of architecture and commerce. It was nominated for illustrating the scale of civic development anticipated but never fully achieved during the boom years of iron mining on the Cuyuna Range.

The Hotel Wolf is a hotel and restaurant in Saratoga, Wyoming. The two-story brick building was built at an estimated cost of $6000 in 1893 for Frederick G. Wolf, a German immigrant who had operated liquor stores in Wyoming. It opened for dining with a banquet on New Year's Eve 1893. The hotel opened on January 10, 1894. Two years after Wolf's death in 1910 his widow Christina sold the property to George W. Sisson for $10,000. It continues to operate as a hotel and restaurant.

The Davidson Building is a historic building located in Sioux City, Iowa, United States. It was constructed by local businessmen and real estate developers Ben and Dave Davidson. They saw the need for an upscale office building for professionals. They hired prominent local architect William L. Steele to design the Early Commercial-style structure. It was built by the leading contractor in the city, Lytle Construction Company. Completed in 1913, it was Sioux City's first office building. The exterior of the L-shaped, six-story building is composed of terra cotta panels separated by vertical bands of Roman style brick, and capped with an ornate cornice. It is Sullivanesque in its design. Commercial space is located on the first floor, and office space occupies the upper floors. The building was listed on the National Register of Historic Places in 1999. In 2016 plans were unveiled to convert the building into a boutique hotel.