Encinal High School is a co-educational public high school serving grades 6-12. It is located in Alameda, California, United States, and is part of the Alameda Unified School District.

The school was one of several in the Alameda district that was said to face closure depending on the success or failure of Measure E, a $150-per-parcel property tax increase voted on by mail-in ballot. [2] Measure E was defeated when it failed to garner the required two-thirds majority; however, the school did reopen in fall 2010.

The student body is 23% African-American, 20% White non-Hispanic, 39% Asian, 15% Hispanic or Latino, 1% American Indian or Alaskan Native, 1% Pacific Islander, and 1% multiple ethnicity or no response, according to the California Department of Education, for the 2005-2006 school year. [3]

On April 1, 2010, about 200 students attending Encinal High School staged a "teach-in" protest in light of possible further budget cuts from the AUSD and closure of the school. Teachers and students planned a series of classes that were divided into two sessions with a break in between that included free food (from the Barbeque Club) and live music from certain Encinal staff members. Most of the classes were led by teachers, but two were taught by seniors (including a "no boundaries" music class led by Matt Ortega). The students who attended showcased their Jet Pride by participating in a variety of unique classes including how to make salt water taffy through chemistry, protest poetry and art, a music class with no musical boundaries, and cow eyeball dissection. A small point that the coordinators of this event wanted to get across was the date that was chosen for it: April 1, 2010 was the Thursday before Encinal's spring break began. [5]

On March 5, 2008, about 1,000 students from Encinal High School walked out of class to protest the budget cuts for the 2008–2009 school year. The budget cuts were a result of the $4 billion budget cut approved by California governor Arnold Schwarzenegger. The cuts would eliminate many school sports and Advanced Placement classes, and lay off about 46 teachers. The walkout began at Encinal High where students marched to the Alameda Unified School District (AUSD) offices located on the Alameda High campus, where the 1,000 Encinal students were joined by many more students from Alameda High. After about a half-hour of chanting protests outside the District offices, AUSD superintendent Ardella Dailey invited the walking out students into the Kofman Auditorium to try to explain why the cuts were required. [6]

Text messaging technology, as well as social networking sites, such as MySpace, Facebook, and YouTube, helped the students coordinate and announce the walkout. Before they reached the district office, many Encinal students text messaged students at Alameda High. Aware of the walkout only when the Encinal students reached the district office, Alameda High officials were unable to prevent their students from leaving class. They were all marked with cleared absences.

The Jets are a member of the West Alameda County Conference (WACC 12).

Jetsetters has partnered up with Encinal to provide ROP classes for students such as Drivers' Education, Dancing, and Arts & Crafts. They also have an after school program designed to help students in need.

Sanctioned clubs at the school include:

The Encinal High Jets band, the Marching Jets, is the island's only high school marching band, and is led by Band Director Anthony Gennaro.[ citation needed ] Throughout the year, the musicians compete in band reviews all over Northern California and hold the Island Winterguard show every March. During the 2005–2006 school year, the band placed in the top three in every review they entered. During the 2016–2017 school year, the band took first place in their division at every review they attended, including taking first place at the Santa Cruz Band Review for the third year in a row.

Encinal High School also had a rich dramatic arts program, run by Robert Moorhead until his retirement in 2016. The drama department has in past years performed critically renowned productions of Les Misérables , Hamlet , and The Sound of Music .[ citation needed ] In the spring of 2006 Encinal High performed Cats . In the winter of 2007, Encinal High School performed Twelve Angry Men .

In 2008 they performed Angels in America . They were the first high school to do so.[ citation needed ] They also performed Carousel .

In 2009 they became one of the first schools in the country to perform the school edition of Rent .

In 2010 they performed the classic musical West Side Story .

In 2011 they performed their version of Seussical , a Dr. Seuss musical.

In 2012 they performed the classic musical Anything Goes .

In 2013 they performed a high school version of the musical Hair , although without the nudity of the traditional version.

In 2014 they performed the musical Hairspray. 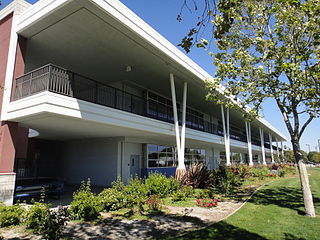 Dublin High School is a four-year State school#United States high school located in the East Bay Area. It is the only currently operating high school in the Dublin Unified School District—as another high school in the city has yet to be constructed and operational—and serves about 3,500 students.

Lancaster High School is a high school in Lancaster, New York, United States that serves grades 9-12. It is operated by the Lancaster Central School District. 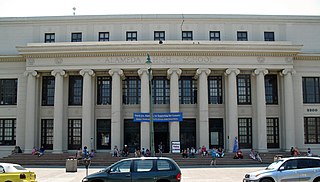 Alameda High School is a co-educational State school#United States high school serving grades 9–12. It is located in Alameda, California, United States, and is part of the Alameda Unified School District.

San Marcos High School is a public high school located in a suburban area two miles from the city of Santa Barbara, California. Accredited through the Western Association of Schools and Colleges, the school was named a California Distinguished School in 1994 and 2005, and a Gold Ribbon School in 2015.

Mira Mesa Senior High School (MMHS) is a public high school in the San Diego Unified School District. The school is recognized as a National Blue Ribbon School and a California Distinguished School. The school has an overall rating of 9.6/10 according to parents and students from the website greatschools.org. The school serves the Mira Mesa community as well as students participating in the San Diego Unified School Districts Voluntary Enrollment Exchange Program (VEEP). 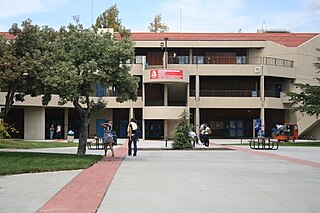 Cullman High School is the largest public high school in the city of Cullman, Alabama as well as Cullman County, Alabama. The school is classified as a 6A school and belongs to the Cullman City School District.

Amador Valley High School is a comprehensive public high school in Pleasanton, California. It is one of three high schools in the Pleasanton Unified School District, along with Foothill High School and Village High School.

Pinole Valley High School is a high school in Pinole, California, United States, in Contra Costa County. First opened in 1967, the school is part of the West Contra Costa Unified School District. Pinole Valley High serves grades 9–12, and has approximately 1,200 students from Pinole, the Richmond neighborhoods of Parchester Village and Hilltop Bayview and several unincorporated communities such as Tara Hills. The school is noted for its girls' basketball team. Coach Dan O'Shea was named "Coach of the Year" in May 2006 by the Oakland Tribune.

Yucaipa High School is a public high school in Yucaipa, California, United States that serves the cities of Yucaipa and Calimesa and the community of Oak Glen, 65 miles east of Los Angeles. 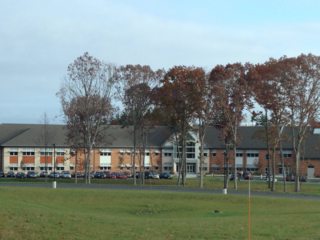 Uxbridge High School (UHS) is the only high school in Uxbridge, Massachusetts, United States. The school is a part of Uxbridge Public Schools. A new high school opened in 2012 at 300 Quaker Highway. 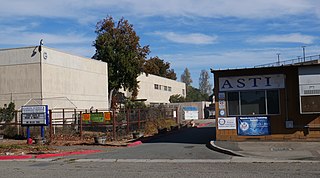