Alameda High School is a co-educational State school#United States high school serving grades 9–12. It is located in Alameda, California, United States, and is part of the Alameda Unified School District. [3] [4]

The suggestion to open a "Preparatory Department of a High School" was first presented at an Alameda Board of Education meeting held on March 6, 1874. On April 17, 1874, C. Y. Johns was elected as the first principal. Classes began with 52 students, in July 1874, in a rented room over a drugstore on Park Street known as "Boehmer's Hall". The building still exists today as the China House restaurant.

Boehmer's Hall was only temporary. A new building was already being built on a site on Santa Clara at Chestnut, and was completed and occupied in 1875. The high school shared space with the Grammar Department in what became known as Haight School. The site is still occupied by this school today. The class of 1878, totalling nine students, was the first to graduate from Alameda High School.

It wasn't long before the number of students enrolled in the high school outgrew the space available at Haight. Temporary quarters were located at the Porter school, located on Alameda Avenue, by 1900. A campaign was started for a new separate high school building.

With the help of the high school student body, a bond was passed in the city for the new school. The cornerstone was laid in 1902 on the new site at Central and Walnut. The building was dedicated in 1903 and occupied in time for the December 1903 term.

Continued growth in enrollment required an even larger campus. In 1925 a new bond issue was voted on. The new school, dedicated in 1926, comprised three connected buildings, including the original 1903 structure which was refurbished to blend with the architectural style of the other two. The architecture, designed by local architect Carl Werner, is early twentieth-century Neo-Classical Revival in nature, evoking images of ancient Greek temples with Ionic columns in front of the Kofman Auditorium, a facility known throughout the Bay Area as one of the best of the local playhouses. [5]

By 1955, the "old building" had outlived its usefulness and was replaced with what became known as the "new building" by subsequent students until 1977.

Campaigns to replace old public buildings with newer earthquake-safe structures led to the construction of the newest high school building, across the street from the established campus, on Encinal at Walnut.

Original plans involved tearing down the 1926 buildings and replacing them with a sports complex, and only keeping the "new building" of 1955. A dedicated group of alumni and citizens saved the venerable buildings, and the planned new construction was scaled back to what exists today.

The newest building was first occupied in 1978 and included the site of the former Porter school. The west wing now houses Language and Fine Arts, as well as the Frederick L. Chacon Little Theater. The school was made an Alameda Historical Monument in 1976 and was listed in the National Register of Historic Places in 1977.

The school has received National Blue Ribbon recognition and California Distinguished School and Digital High School awards. It is accredited by the Western Association of Schools and Colleges, offering more than a dozen Advanced Placement courses.

AHS is part of the West Alameda County Conference (WACC) of the North Coast Section (NCS) of the California Interscholastic Federation (CIF). [8]

Other varsity sports include:

Torrance High School is a high school located in Torrance, California. Founded in 1917, it is one of the oldest high schools in continuous use in California and is the oldest of the four high schools in the Torrance Unified School District. Four of its buildings are listed on the U.S. National Register of Historic Places. 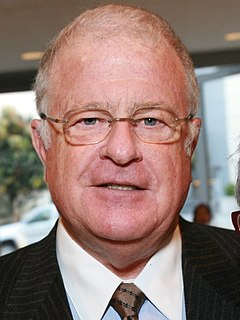 Don Richard Perata is a California lobbyist and former Democratic politician, who was President pro tempore of the California State Senate from 2004 to 2008. He came in second place in the November 2010 election for Mayor of Oakland.

Loyola High School is a private, Roman Catholic, college-preparatory high school for boys in Los Angeles, California, United States. It was established in 1865 and is part of the Society of Jesus. It is the oldest continuously run educational institution in Southern California. 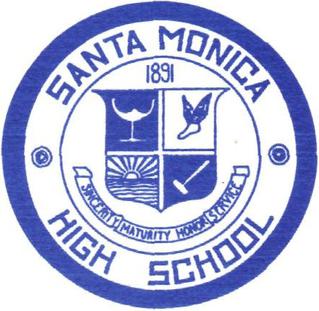 Santa Monica High School, officially abbreviated to Samohi, is located in Santa Monica, California. Founded in 1891, it changed location several times in its early years before settling into its present campus at 601 Pico Boulevard. It is a part of the Santa Monica-Malibu Unified School District.

Folsom High School is a public secondary school in the western United States, located in Folsom, California, a suburb east of Sacramento. Established 99 years ago in 1922, it is a part of the Folsom Cordova Unified School District.

Dos Pueblos High School is a public high school located in Goleta, California, northwest of Santa Barbara. Located adjacent to the foothills on the edge of the Goleta Valley in an area known as El Encanto Heights, it serves a student body of approximately 2,300 in grades 9-12.

Encinal High School is a co-educational [[State school#United States|public high school serving grades 6-12. It is located in Alameda, California, United States, and is part of the Alameda Unified School District.

Founded in 1891, Livermore High School is a public high school located in the city of Livermore, California, United States. It is part of the Livermore Valley Joint Unified School District. In 2007, it was chosen as one in four schools in Alameda County to receive the California Distinguished School award.

Arnold O. Beckman High School is a public school in Irvine, California, United States, serving 3,013 students from grades 9 through 12. The original $69 million facility was opened on August 30, 2004. The World Languages Building - a new, $17 million, two-story, 30,000-square-foot facility - was unveiled on September 1, 2015. The school is commonly known as Beckman and is named after Arnold Orville Beckman: a scientist, chemist, and philanthropist famed for inventing the pH scale during his tenure at Caltech.

Tustin High School is a public high school located in Orange County in the city of Tustin, California, United States. The school's mascot is the Tiller. Tustin High is a part of Tustin Unified School District and was originally established in 1921 as Tustin Union High School.

Christopher Edward Speier is an American former professional baseball player. He played in Major League Baseball as a shortstop, most notably for the San Francisco Giants and the Montreal Expos. He is known by the nickname "The Alameda Rifle" as a native of the San Francisco Bay Area city who possessed a strong arm during his days as an active player.

Esperanza High School (EHS) is a public high school located in Anaheim, California and is part of the Placentia-Yorba Linda Unified School District. 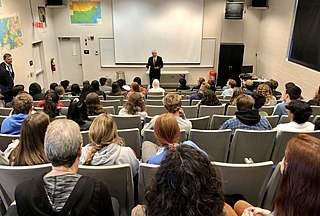