An alquería (Spanish:  [alkeˈɾi.a] ; Valencian : alqueria [alkeˈɾi.a] ; Portuguese : alcaria [aɫkɐˈɾi.ɐ] ; from Arabic al-qarīa, "village, hamlet") in Al-Andalus made reference to small rural communities that were located near cities (medinas). [1] Since the 15th century it makes reference to a farmhouse, with an agricultural farm, found mainly in eastern and southeastern Spain, such as Granada and Valencia. Regarding the latter location Joan Fuster, in his book called El País Valenciano, makes extensive reference to the Valencian alquerías. [2]

An alquería is a small rural community formed by a few houses. The inhabitants were usually one or more families who made a living exploiting the surrounding lands, including farming and rearing livestock. [1] The word alquería can be traced back to the 15th century. [3] In the Horta of Valencia, where traditionally they have always been more plentiful, it is the corresponding dwelling to an important agricultural exploitation, usually on irrigated lands, unlike the hut, typical of the smallholding, and the masia, of cereal and livestock character. [3] By the end of the Middle Ages this Andalusian farm fortress evolved into more modern forms, with a small palace-like look, inhabited by rural lords. [3]

To the west the Las Hurdes region in Extremadura was depopulated after the Arab invasion of Spain in the 8th century, and the first vestiges of re-population in isolated compounds of a few dwellings or hamlets, locally known as alquerías, are dated around the end of the 12th century. [4]

Many of the alquerías in the modern sense have disappeared. Some adopted different activities, such as mills or workshops, although many of them were abandoned through lack of use or depopulation. Moreover, in the urban expansionary policy, the alquerías are goods which are coveted in terms of the economic value that the greenfield that they occupy has. [3] All this has implied that many of the alquerías that still exist are threatened with ruin. Some, of private property, have been restored as dwellings, usually as second residences, but they are not the most numerous ones. [3] Due to the rise of the rural tourism, many of the rest ones have been adapted to the hotel trade as accommodations or restaurants, other cultural centers or museums.[ citation needed ]

In the typical Valencian alquería, the floor is a rectangle, which is sometimes joined with another perpendicular one, thus forming a right-angle; some other are formed by two squares, one recorded on the other. [3] There are also farms with an irregular floor. Its elevation is almost always of a smooth façade. The door, which usually has an arch formed by an exact semicircle, can be non-arched. In the frontispiece or façade there are one or two rows of windows; the oldest ones used to have tribolados profiles which are divided by algimeces or mullions. On the ground floor there can be found what properly constitutes the housing, being especially noteworthy the studio or the double chamber. At the bottom of the ground floor we can find the home, with its large bell chimney. [3] When there are two floors, the first may have rooms, which originally would be dedicated to the lords. The ordinary thing is the following: the only floor constitutes the sware, designed to save the harvests, and formerly for rearing silkworms. The cover of the alquerías have always Moorish tiles. [3]

Some alquerías from Granada and other provinces of Eastern Andalusia have survived until nowadays. [5] In the Alpujarras and the region of Guadix, they are currently being recovered for rural tourism, others were converted into farms or councils. [6]

Others, however, were not that lucky and they disappeared as a result of the exodus to big cities.

Since this name is so characteristic of the Valencian land, many companies have adopted it for their trade names. 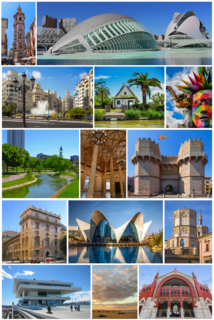 Valencia, officially València, is the capital of the autonomous community of Valencia and the third-largest city in Spain after Madrid and Barcelona, surpassing 800,000 inhabitants in the municipality. The wider urban area also comprising the neighbouring municipalities has a population of around 1.6 million. Valencia is Spain's third-largest metropolitan area, with a population ranging from 1.7 to 2.5 million depending on how the metropolitan area is defined. The Port of Valencia is the 5th-busiest container port in Europe and the busiest container port on the Mediterranean Sea. The city is ranked as a Gamma-level global city by the Globalization and World Cities Research Network. 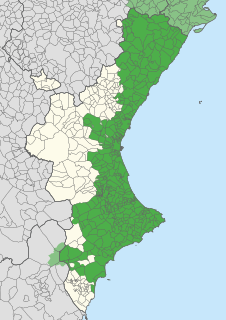 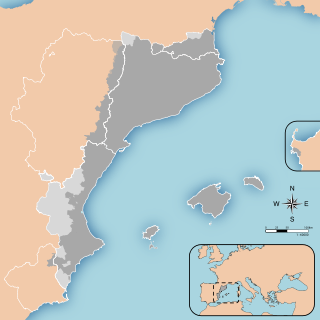 Catalan Countries refers to those territories where the Catalan language, or a variant of it, is spoken. They include the Spanish regions of Catalonia, Valencia, the Balearic Islands and parts of Aragon and Murcia, as well as the department of Pyrénées-Orientales in France, the Principality of Andorra, and the city of Alghero in Sardinia (Italy). In the context of Catalan nationalism, the term is sometimes used in a more restricted way to refer to just Catalonia, Valencia and the Balearic Islands. The Catalan Countries do not correspond to any present or past political or administrative unit, though most of the area belonged to the Crown of Aragon in the Middle Ages. Parts of Valencia (Spanish) and Catalonia (Occitan) are not Catalan-speaking.

Joan Fuster i Ortells was an influential Catalan writer. He is considered a major writer in Valencian-Catalan language, and his work contributed to reinvigorate left-wing, pro-Catalan nationalism in Valencia during the Spanish transition to democracy. In his influential political essay Nosaltres, els valencians (1962) he coined the term Països Catalans to refer to the Catalan-speaking territories, for which he claimed independent statehood from Spain.

Republican Left of the Valencian Country is a Valencian left nationalist and republican party.

The names of the Valencian Community are diverse, even though Comunitat Valenciana is the only denomination with official status in its Statute of Autonomy. Nonetheless, this legal document includes in its Preamble other legal denominations that portray the history and nature of the territory: Regne de València and País Valencià.

Blaverism is a Spanish nationalist and Valencian regionalist ideology in the Valencian Community (Spain) that emerged with the Spanish transition to democracy characterised by strong Anti-Catalanism, born out of its opposition to Joan Fuster's book Nosaltres, els valencians (1962), which promoted the concept of the Catalan Countries which includes Valencia. They consider Fuster's ideas as an imperialist Catalan nationalist movement that tries to impose Catalan domination upon Valencia.

Valencian Left was a nationalist Valencian leftist political party founded in July 1934, that advocated self-determination of the Valencian Community. The party was suppressed in Francoist Spain and was not revived when democracy returned to Spain in the late 1970s.

Valencian nationalism or Valencianism is a political movement in the Land of Valencia, Spain. 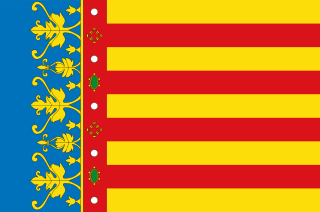 The Valencian Community is an autonomous community of Spain. It is the fourth most populous autonomous community after Andalusia, Catalonia and Madrid with more than five million inhabitants. Its homonymous capital Valencia is the third largest city and metropolitan area in Spain. It is located along the Mediterranean coast on the east side of the Iberian peninsula. It borders with Catalonia to the north, Aragon and Castilla–La Mancha to the west, and Murcia to the south. The Valencian Community consists of three provinces which are Castellón, Valencia and Alicante. 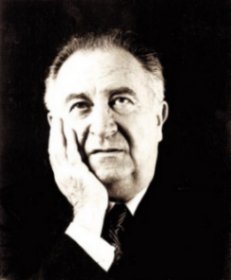 José Albi Fita was a Spanish poet, literary critic, and translator. He was the honorary president of the Asociación Valenciana de Escritores y Críticos Literarios. Albi was the "last of the post-Spanish Civil War poets".

The Valencian linguistic conflict, also known as Valencian sociolinguist conflict, refers to the conflict between the use of the Spanish and Valencian language in Valencia, Spain.

Ricardo J. Vicent Museros was a Spanish printer and publisher. After studying in Germany he returned to Valencia with new methods of work, advertising and graphic marketing. He founded the "Museo Nacional de la Imprenta y la Obra Gráfica" in El Puig de Santa María. He promoted the twinning of the cities of Valencia and Mainz (Germany). In 1992, the International Gutenberg Society granted him the "Gutenberg Prize" and in 2003 he received the "Cross of Civil Merit" from the German government for his work in favour of cultural relations between Spain and Germany.

The Battle of Valencia was an identity conflict held in the Valencian society during the Spanish transition to democracy. It involved the progressive valencianism known as Fusterianism and the conservative anticatalanist regionalism known as blaverism.

Valencian regionalism is a cultural and political movement that advocates the revival of the identity of the region now within the Valencian Community in eastern Spain. Politically, the regionalists support the administrative decentralisation of the Spanish state and, for some, the recognition of Valencian foral law and increased autonomy for the Valencian Community. The movement emerged during the early years of the Bourbon restoration in the last third of the 19th century. It took political shape during the early 20th century, and persisted in a controlled and attenuated form through the Francoist State. After the restoration of democracy, the regionalist tendency was challenged by a Valencian nationalism with some left-wing and pan-Catalanist associations. Regionalism took on a right-wing and anti-Catalanist outlook which became known as Blaverism, and was represented politically by the Valencian Union until the absorption of that party into the People's Party in 2011.

Levante-El Mercantil Valenciano is a newspaper from the Valencian Community that belongs to the Prensa Ibérica printing group, which publishes also the newspaper Información in Alacant. It had a brief precedent in Avance and it was the bulletin of the Valencian section of the FET y de las JONS. The newspaper later belonged to the Movimiento press. From 1977 it belonged to the Medios de Comunicación Social del Estado and in 1984 it was purchased by the private enterprise Prensa Valenciana.

Valencian Nationalist Left is a left-wing valencian nationalist political party founded in the Valencian Community in 1979, as a refoundation of the previous Valencian Regional Union.

Valencian Coalition was a far-right blaverist political organization active in the Valencian Community between 2004 and 2011. CV was linked to more extreme factions of anti-Catalan valencianism, like the Grup d'Acció Valencianista (GAV).