In Ancient Rome, the Aqua Alsietina (sometimes called Aqua Augusta) was the earlier of the two western Roman aqueducts, erected somewhere around 2BC, during the reign of emperor Augustus. It was the only water supply for the Transtiberine region, on the right bank of the river Tiber.

This aqueduct acquired water mainly from a lake just north of Rome called Lacus Alsietinus (a small lake in southern Etruria, currently known as Lago di Martignano) and some from Lacus Sabatinus (Lago di Bracciano). The length of this mainly subterranean aqueduct was 22,172 paces (about 32.8 km) and had arches supporting 358 paces (about 0.53 km). Its water supply had a diameter of 392 quinariae (about 9 m).

This water was not suitable for drinking, however, and emperor Augustus used it to fill his naumachia in Trastevere. This water supply allowed emperor Augustus and the public to enjoy sham naval battles. The water surplus was used for the irrigation of Caesar's horti (gardens) and for the irrigation of fields. Such an abundant supply of water gives an idea how much water Rome had at its disposal.

In his chief work, De aquaeductu (written in 97 CE), containing a history and description of the water-supply of Rome, Sextus Julius Frontinus ascribes only a meager volume to the Aqua Alsietina. This makes sense, if the naumachia was no longer in use in his time (second half of the first century CE).

Some traces of this aqueduct were discovered in 1720. An inscribed stone slab was found in 1887 near the Via Claudia. It is the only written record of the Aqua Alsietina.

The fountain of the Acqua Paola in Rome, built under Pope Paul V announces wrongly on its triumphal arch that "Paul V restored the ancient ducts of the Aqua Alsietina". Actually the engineers had rebuilt the old Aqua Traiana, which had run close to the Aqua Alsietina.

The naumachia in the Ancient Roman world referred to both the staging of naval battles as mass entertainment, and the basin or building in which this took place.

Lake Martignano, is a small lake in Lazio, Italy 24 kilometres (15 mi) north-north-west of Rome, in an extinct crater or maar. Administratively its coast is divided amongst the municipalities of Rome, Anguillara Sabazia and Campagnano di Roma. 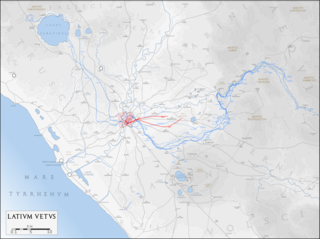 Aqua Claudia was an ancient Roman aqueduct that, like the Aqua Anio Novus, was begun by Emperor Caligula in 38 AD and finished by Emperor Claudius in 52 AD. 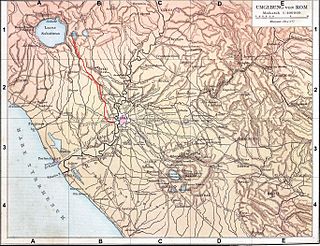 The Aqua Augusta was a short aqueduct in Rome. Owing to severe drought, the Emperor Augustus built the Aqua Augusta in or around 33 BC in order to supplement the Aqua Marcia, and then later the Aqua Claudia when required. However, the aqueduct was poorly designed and most of it collapsed in 27 BC. 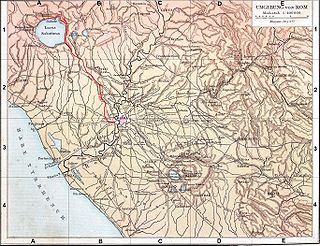 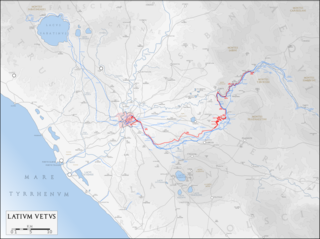