Arriva Midlands [1] is a bus operator providing services in the East Midlands and West Midlands areas of England. It is a subsidiary of Arriva UK Bus.

In February 2007 the business of Chase Coaches was purchased with 27 buses with operations integrated into Arriva's Cannock depot. [8] In late 2007 a new ChaseLinx brand (similar to the Leicester Linx brand below) was introduced, reflecting the purchase of Chase Coaches.

In December 2007 Swadlincote depot closed with operations transferred to Burton upon Trent. In August 2008 the Hinckley depot and services were sold to Centebus Holdings. [9] In January 2009 Shifnal depot closed while in the same month Bridgnorth reopened.

On 23 April 2017 the Wednesfield depot closed with some services passing to Diamond Buses with nine vehicles and the remainder of vehicles reallocated to other depots. [21] [22] The depot had only reopened in March 2013 after a refurbishment. [23]

In 2017, four Arriva Shires & Essex depots (Milton Keynes, Luton, Aylesbury and High Wycombe), and their routes, were transferred into the management of Arriva Midlands. The vehicles were renumbered in late 2018 and early 2019 to avoid multiple vehicles having the same fleet numbers. [24]

Arriva announced that from 1 April 2018 that no buses from their Cannock depot would run during the evenings and Sundays as a result of Staffordshire County Council funding cuts. [25] Hundreds signed an online petition within the first week, which quickly lead to thousands including backing from two local MPs. [26]

In November 2020 it was announced that the Cannock Depot would be sold to D&G bus, with services being operated under the Chaserider brand from the end of service on the 9th of January 2021. [27] [28]

In 1994 Derby City Transport was privatised and sold to British Bus. [29] In August 1996 British Bus was purchased by the Cowie Group and the operation rebranded as Arriva Derby. [30]

In September 1981 Midland Red East [31] was formed with 181 buses operating from five depots in Derbyshire, Leicestershire, Lincolnshire and Nottinghamshire as part of the breakup of the Midland Red bus company, and in January 1984 was renamed Midland Fox. [3] In 1987 it was privatised in a management buyout. Several smaller operators including Loughborough Bus & Coach Company were purchased and in 1989 it was sold to the Drawlane Group. In November 1992 it was sold to British Bus which in August 1996 was sold to the Cowie Group and later renamed Arriva Fox County. [5]

Arriva currently operate from four depots within the former 'Fox County' area these are Thurmaston, Coalville, South Wigston and Barwell.

In September 2013, Centrebus Group sold its shares in Centrebus Holdings to Arriva [32] [33] which included depots and services in West Yorkshire which became Yorkshire Tiger.

The operations based in Barwell, Leicestershire were rebranded as Hinckley Bus but in late 2018 they merged into the main Arriva Midlands business and the depot in Barwell operates as an outstation of South Wigston depot.

Arriva Midlands operate twelve depots as of January 2021 in: [34]

In 2017, four Arriva Shires & Essex depots (Milton Keynes, Luton, Aylesbury and High Wycombe), and their routes, were transferred into the management of Arriva Midlands. The vehicles were renumbered in late 2018 and early 2019 to avoid multiple Arriva Midlands vehicles sharing the same fleet numbers. [24] 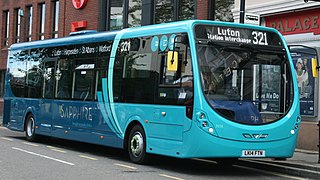 Arriva Shires & Essex is a bus operator providing services in Bedfordshire, Buckinghamshire, Essex and Hertfordshire, with services extending to Oxfordshire and Greater London. Until 2002 its operations included Colchester. It is a subsidiary of Arriva UK Bus. 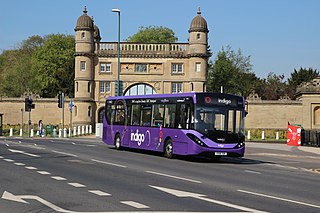 Trent Barton, stylised as trentbarton, is a bus operator based in Heanor, Derbyshire. A combination of the Trent Motor Traction Company and Barton Buses Limited, it is the major operating division of the Wellglade Group.

Midland Red was a bus company that operated in The Midlands from 1905 until 1981. It was one of the largest English bus companies, operating over a large area between Gloucester in the south and Derbyshire in the north, and from Northampton to the Welsh border. The company also manufactured buses.

Arriva Fox County, trading as Arriva Midlands Limited, is a bus company operating services in Leicestershire. It is a subsidiary of Arriva. 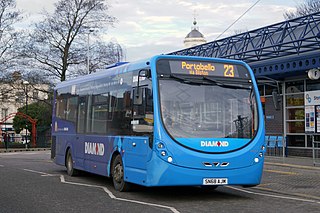 Diamond Bus Ltd., trading as Diamond West Midlands, is a bus operator in the West Midlands. It is a subsidiary of Rotala. 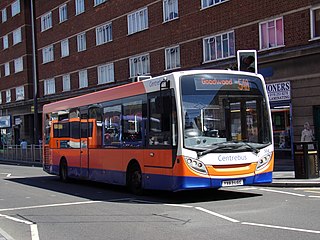 Centrebus is a bus company based in Leicester operating services in Bedfordshire, Hertfordshire, Leicestershire, Lincolnshire, Nottinghamshire and Rutland. 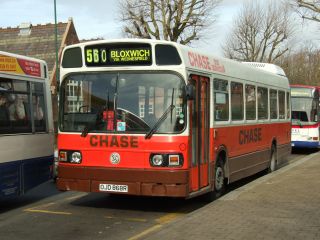 Chase Coaches was a bus company operating in the Black Country. 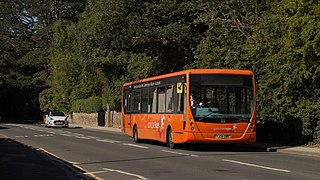 Midland, previously known as Choice Travel, was a bus company operating mostly in the Wolverhampton area of the West Midlands. Some services also operated in the Staffordshire area.

Arriva Derby is a bus operator in Derby. It is a subsidiary of Arriva Midlands.

London Country North East was a bus operator in South East England and London. It was formed from the split of London Country Bus Services in 1986 and operated a fleet of around 350 buses from six garages, with its headquarters located in Hatfield.

Julian Peddle is an entrepreneur who has worked in the bus industry since the early 1980s, having owned or part-owned numerous bus companies. He spent 11 years as co-owner of Stevensons of Uttoxeter between 1983 and 1994, having previously been its traffic manager. During the late 1990s and early 2000s he ran Status Group, a group of small bus companies spread across England which included BakerBus, Choice Travel and MK Metro. He was a major shareholder in Tellings-Golden Miller and Centrebus Holdings before their sale to Arriva.

Yourbus was a bus operator in Derbyshire and Nottinghamshire. It ran commercial and tendered local bus services from its base in Heanor.

Wardle Transport was a bus operator based in Stoke-on-Trent, Staffordshire, England. Formed in 1963 as Jack's of Norton, it expanded from 2001 to operate a network of local bus routes using over 60 vehicles.

The Wellglade Group is a transport group operating bus and tram services in the English Midlands.

D&G Bus is a local bus operator owned by Centrebus and based in Adderley Green, Stoke-on-Trent, Staffordshire.

Stevensons of Uttoxeter was a bus company that operated in Staffordshire from 1926.

Midland Classic is a bus company from Burton upon Trent, Staffordshire, England. They are Burton upon Trent's main bus operator, providing bus services around the Staffordshire town and beyond to Ashby-de-la-Zouch, Uttoxeter, Lichfield, Melbourne, East Midlands Airport, and other surrounding towns and villages.