Arriva Southern Counties [1] is a bus operator in Surrey, West Sussex, East Sussex, Kent, Essex, Hemel Hempstead, and Watford in England. It is a subsidiary of Arriva UK Bus.

In November 1986 the National Bus Company sold Maidstone & District in a management buyout to Einkorn Limited. [1] In June 1988 New Enterprise Coaches of Tonbridge was purchased, followed in December 1991 by four buses and their associated Kent County Council services from Shearings, [2] and in June 1992 Boro'line Maidstone. [3] [4] [5]

In 1990 British Bus purchased the Cranleigh, Guildford and Woking based operations of Alder Valley followed in 1993 by Colchester Borough Transport and Southend Transport. [5]

In April 1995 Einkorn was sold to British Bus, [6] which had purchased Kentish Bus in July 1994 and Londonlinks in 1988. In August 1995 Einkorn was renamed Invictaway. [1] Invictaway was previously the name of the Maidstone & District commuter services to London, which were renamed Green Line at the same time. [5]

In July 1996 British Bus was taken over by the Cowie Group. [7] [8] Invictaway was renamed Arriva Southern Counties in April 1998, [1] and Arriva transferred London & Country (also owned by British Bus) to it. The subsidiary operating companies therefore became:

Current operations in the South East area are:

In 2001, the Crawley depot and operations were sold to Metrobus and the depot in Merstham was closed. [14]

In March 2015, Network Colchester and Network Harlow operations were taken over from Tellings-Golden Miller, who at the time was an Arriva subsidiary. Both operation companies were rebranded Arriva Colchester and Arriva Harlow respectively.

The Medway Towns network was upgraded in a £10 million investment marketed as Operation Overdrive.

Arriva Southern Counties operate the Fastrack busway scheme in the Thames Gateway area of Kent on behalf of the Kent County Council and Prologis. This network currently consists of two routes: Route A runs between Dartford and the Bluewater Shopping Centre, while Route B runs from Temple Hill to Gravesend via Dartford. Since November 2007, Route B has connected with the Eurostar at Ebbsfleet International railway station, and Eurostar passengers are allowed to use the route for free. On 11 February 2008, Arriva started a new "m-tickets" scheme, where passengers are able to pay for bus tickets using their mobile phones. [26]

The main corporate Arriva livery is aquamarine for the body, with a cream "swoop" at the front and a white separator line in between, blue Arriva "circles" logos, and a thin yellow line at skirt level. There are many variations of the livery, such as:

As well as this, many vehicles operating under different schemes run in different liveries, for example Fastrack and Maidstone Park & Ride.

The locations of Arriva Southern Counties' depots and the divisions which operate them are:

Dartford and Grays garages were the only Arriva Southern Counties depots which did not have commercial services and only handled services operated under contract to Transport for London with all buses painted in red Arriva livery.

Commercial routes previously operated from Dartford depot before it became an all Transport for London depot were transferred to Northfleet. Grays depot switched to all Transport for London services after Arriva Southend withdrew both commercial routes 373 and 383 in the Grays area, partially replacing them by extending route 5 from Southend-on-Sea. Routes 44 and 150, the remaining services in the Grays area, are operated under contract to Thurrock Council. The buses used for these routes were transferred to Southend.

As part of a decision to consolidate all of Arriva's Transport for London routes, Dartford and Grays garages transferred to Arriva London on 1 January 2016. [31] [32]

As at December 2013 the fleet consisted of 900 buses and coaches.[ citation needed ] As at September 2014, 113 buses were dedicated to the Transport for London services. [35] 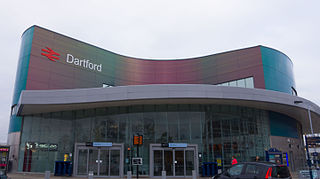 Dartford railway station serves the town of Dartford in Kent, England. It is 17 miles 12 chains (27.6 km) down the line from London Charing Cross. Train services from the station are operated by Southeastern and Thameslink. Southeastern also manages the station. Dartford is a major interchange station in the North Kent region of the Southeastern network. Ticket barriers control access to the platforms. 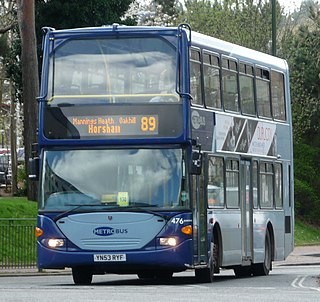 Metrobus is a bus operator with routes in parts of Surrey, Kent, Sussex, and Greater London. Formed through a management buyout in 1983, Metrobus was purchased by the Go-Ahead Group in September 1999.

Arriva Kent Thameside is a bus operator based in North-West Kent, England. It is a subsidiary of Arriva. The company operates services in Northfleet, Gravesend & Dartford as part of the Arriva Southern Counties division from their Northfleet depot.

Stagecoach South is a bus operator providing services in South East England. It is a subsidiary of Stagecoach. It operates services in Hampshire, Surrey, and Sussex with some routes extending into Brighton and Wiltshire. It operates 473 buses from eight depots. 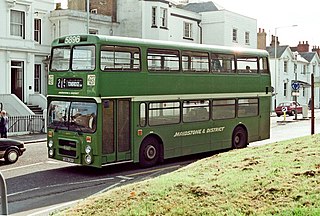 Maidstone & District Motor Services was a bus company based in Maidstone, Kent. The company operated bus and coach services in Mid and West Kent and East Sussex from 1911 until 1998. The company's surviving operations were absorbed into Arriva Southern Counties. 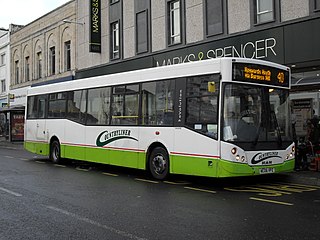 Countryliner was a bus and coach operator, based in Uckfield, England. It ran over fifty bus services, mainly operating in Sussex and Kent with some operations into Hampshire. On 8 October 2012, it was placed in administration. It continued other services under a different licence trading as SwiftBus, this ceased trading on 18 January 2013.

London Country South West (LCSW) was a bus operator in South East England and London. It was formed from the split of London Country Bus Services in 1986 and operated a fleet of around 415 buses from 10 garages, with its headquarters in Reigate. 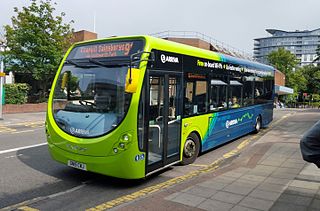 Arriva Guildford & West Surrey is a bus operator based in Guildford, England. It is a subsidiary of Arriva. The company operates services in West Sussex and Surrey, as part of the Arriva Southern Counties division. Services are run primarily centred on hubs at Guildford, Woking and Cranleigh.

Fastrack is a bus rapid transit scheme in the Thames Gateway area of Kent. It consists of two routes operated by Arriva Southern Counties on behalf of Kent County Council. Measures used to allow buses to avoid traffic include signal priority, reserved lanes, and dedicated busways.

Transportation needs within the county of Kent in South East England has been served by both historical and current transport systems. 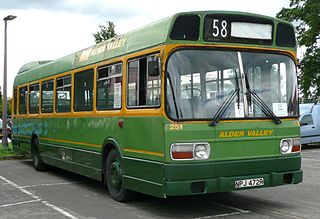 Alder Valley was a bus operator in South East England. 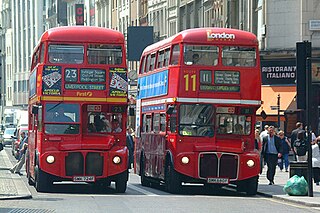 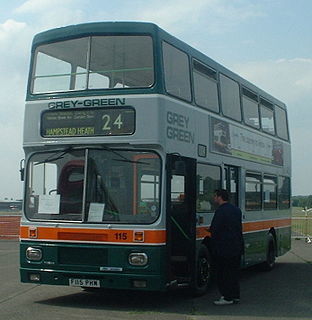 Grey-Green was a bus and coach operator in England. It was based in Stamford Hill and operated in London and the East of England.

Invictaway was an express commuter coach service from Kent to London in the 1980s and 1990s, and was also a holding company for the emerging Arriva group. As a legal entity of the Maidstone & District bus company, after the cessation of the Invictaway coach services, the Invictaway company legal lettering persisted as a holding company for the Arriva subsidiaries in Kent, and some London operations. This company was based in the Armstrong Road M&D depot in Maidstone. This ceased in 1997 when the operations were reconstituted as Arriva London and Arriva Southern Counties.

London Country South East (LCSE) was a bus operator in South East England and London. It was formed from the split of London Country Bus Services in 1986 and operated a fleet of around 170 buses from four garages, with its headquarters located in Northfleet. It was rebranded as Kentish Bus in 1987 and used this name for most of its existence. Its former garages and operations now form part of Arriva Southern Counties and Arriva London, though several of its former major routes, such as Crawley to Redhill, which passes Gatwick Airport, were passed on to Metrobus.

Tillingbourne Bus Company was a bus company based in Cranleigh, Surrey. The company operated bus and coach services in Surrey, West Sussex, Hampshire and Berkshire from 1924 until 2001. 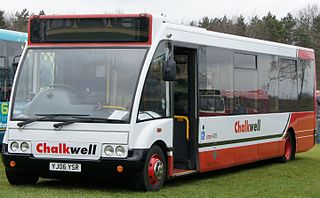 Chalkwell Coaches is a bus and coach tour operator in Sittingbourne, Kent.

Go-Coachhire Ltd is a bus operator running a total of 46 bus services across Kent and Sussex. The majority of these services are operated on behalf of Kent County Council from depots in Otford and Swanley.