The Berks & Bucks FA County Senior Cup is the Senior County Cup competition of the Berks & Bucks FA and was first played in 1878/79; a time when the FA Cup had only been going for seven years, there was no Football League, and most countries in the world did not have any competitions at all.

Originally known as the Berks & Bucks Challenge Cup, the competition was played in the first season of the Association's existence, and Reading were the inaugural winners, defeating Marlow 1–0 in the final held at the Reading Cricket Ground.

In 2019, Slough Town defeated Reading 3–1 in the final at Larges Lane, Bracknell.

Teams shown in italics are no longer in existence.

Slough Town have won the cup under four different club names, the others being Swifts FC, Slough FC, and Slough Centre FC.

11 teams have won the competition on one occasion, including Maidenhead Norfolkians, Abingdon Town, Hungerford Town and Milton Keynes Dons.

Wolverton Association Football Club, often known simply as Wolverton, was an English football team representing the town of Wolverton. The club's motto was "In Omnia Paratus". The club was wound up in 1992. Until 2007, its former home ground, Wolverton Park had what was believed to be the oldest football stand in the United Kingdom. The ground and immediate area has since been redeveloped into a housing area, Wolverton Park housing development. In November 2012, the football stand structure is still in place, but it has been stripped to act as an ornamental feature on the edge of the community park which has been built on top of the old football pitch.

The Thames Valley Premier Football League is a football competition based in England. It has a total of five divisions – the Premier Division, then Divisions One to Four. It was founded in 1989 as the Reading Senior League, as a merger of the two leagues in the town – Reading & District League and the Reading Combination Leagues. The league ran 10 divisions in the 1989–90 season, but that has reduced over the years to the current five divisions.

Holmer Green Football Club are an F.A. Charter Standard football club based at Holmer Green near High Wycombe in Buckinghamshire, England. The club is affiliated to the Berks & Bucks Football Association. They were established in 1908 and were founder members of the Chiltonian League in 1984. They are members of the Spartan South Midlands League Premier Division. They are currently managed by Matt Stowell.

Eton Wick is a football club based in Eton Wick, England. They currently play in the East Berkshire League Premier Division.

New Bradwell St Peter Football Club is a football club based in New Bradwell in Milton Keynes, England. They are currently members of the Spartan South Midlands League Division Two and play at the Recreation Ground.

Stony Stratford Town F.C. is a football club based in Stony Stratford, a constituent town of Milton Keynes, Buckinghamshire, England. The Senior Team are currently members of the North Bucks & District League Division One and play at Ostler's Lane.

Pitstone & Ivinghoe Football Club are a football club based in Pitstone, near Leighton Buzzard, England. They are members of the Spartan South Midlands League Division Two. The club is affiliated to the Berks & Bucks Football Association.

Marlow United Football Club is a football club based in Marlow, Buckinghamshire, England. They were established in 1977 and were among the founding members of the Reading Football League in 1989.

The North Bucks & District Football League, commonly referred to as simply the North Bucks League, is a competition affiliated to the Berks & Bucks County Football Association featuring amateur association football clubs primarily in Northern Buckinghamshire, England, although there are members from the surrounding counties of Oxfordshire, Northamptonshire and Bedfordshire. The league was established in 1911 and is split into four divisions: the Premier Division, the Intermediate Division, Division One and Division Two, which sit in the 12th to 15th tiers of the English football league system. The Premier Division sits immediately below the lowest level of the National League System – Step 7.

The Berks & Bucks Football Association is the County Football Association for Berkshire and Buckinghamshire. It is responsible for the development of association football in the two historic counties. It organises cup competitions between affiliated football clubs and the selects two representative teams. It was formed in 1878, with the first president and driving force being Mr J H Clark from Maidenhead.

Lewis Merryn Ochoa is an English semi-professional footballer who plays as a midfielder. He began his career in the Football League with Brentford, for whom he made one professional appearance, before dropping into non-League football upon his release in 2009.

Woodley United F.C. is a football club based in Woodley, Berkshire, England. The club can trace its history back to 1904 although it is thought that it existed in the 19th century. Currently it is a member of the Combined Counties League Division One.

Windsor Football Club is an English football club formed in 2011 after Windsor & Eton folded. The club are current members of the Combined Counties League Premier Division North and play at the former Windsor & Eton's Stag Meadow ground. The club is affiliated to the Berks & Bucks Football Association.

Bletchley Town F.C. was a football club based in Fenny Stratford near Bletchley, a constituent town of Milton Keynes in Buckinghamshire, England. The business was dissolved on 29 January 2013 For the 2012–13 season, the first team was a member of the Spartan South Midlands League Division Two.

George Moleski is an English retired semi-professional footballer who made one appearance in the Football League for Brentford as a midfielder.

Adrian Lewis Clifton is an English born Montserratian footballer who plays as a forward for National League club Boreham Wood and the Montserrat national football team. 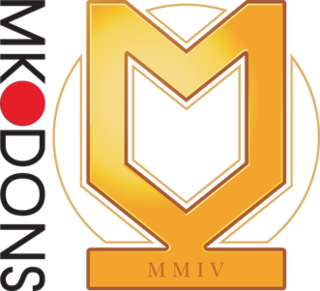