listen ); Arpitan: Bôrg-Sant-Mori or simply Le Bôrg), popularly known as Bourg, is a commune in the Savoie department in the Auvergne-Rhône-Alpes region in Southeastern France. Located on the Italian border south of Chamonix-Mont-Blanc, it had a population of 7,252 as of 2018. It serves as a transport hub for the Paradiski ski area, with direct trains from London and Amsterdam during the winter.

Bergintrum was a place on the Gallic side of the pass of the Alpes Graiae, lying on the road marked in the Antonine Itinerary between Mediolanum (modern Milan) and Vienna (modern Vienne, Isère). Jean-Baptiste Bourguignon d'Anville (Notice, etc.) placed it between Axima (modern Aime) and Alpis Graia. The distance from Bergintrum to Axima, marked viiii M. P. The Alpis Graia, is usually identified with a settlement at the watershed on the Pass of the Little Saint Bernard, which divides the waters that flow to the Isère on the French side from those that flow to the Dora Baltea on the Italian side. This is the place D'Anville calls L'Hôpital, on the authority of a manuscript map of the country. D'Anville first proposed the identification of Bergintrum with Bourg-Saint-Maurice; although he acknowledged that xii, the distance in the Table between Bergintrum and Alpis Graia, does not fit the distance between Bourg-Saint-Maurice and L'Hôpital, which is less. Modern scholarship confirms the identification. [2] In the course of the French Revolution, Bourg-Saint-Maurice was briefly renamed Nargue-Sarde between 1794 and 1815.

Located in the arrondissement of Albertville in the Savoie department in the Auvergne-Rhône-Alpes region, Bourg-Saint-Maurice is the last town along the Tarentaise Valley in the heart of the French Alps.

Bourg-Saint-Maurice station is linked to the TGV network and has services direct from London (Eurostar) and Amsterdam (Thalys) in the winter. The Arc en Ciel funicular railway links the town to the Arc 1600 ski area.

Ouvrage Chatelard is a lesser work (petit ouvrage) of the Maginot Line's Alpine extension, the Alpine Line, also known as the Little Maginot Line. Begun in 1938, the ouvrage consists of one infantry block about one kilometer northeast of the town, in the village of Le Chatelard. A short gallery with cross galleries extends into the rock, with an emergency exit and ventilation shaft halfway back. The ouvrage was incomplete in 1940, under the command of Sub-Lieutenant Bochaton. [3]

The Catholic church of St Maurice is on Grande Rue in the centre of town, the Protestant church is on Avenue Maréchal Leclerc to the south.

Located in the far east of France, Bourg-Saint-Maurice is right on the boundary between the warm-summer humid continental climate (Dfb) and the oceanic climate (Cfb) under the Köppen system. Winters are long, cold with at least five months of below-freezing temperatures, especially at night. Summers are usually warm and stormy.

Bourg-Saint-Maurice provides accommodation and a transport hub for the Paradiski ski area (425 km of slopes, 141 lifts, 239 slopes: 12 Green, 132 Blue, 66 Red, 29 Black). [4] Although there is no skiing at this altitude, it has many budget rental properties. Unlike the villages that make up Les Arcs, Bourg-Saint-Maurice is open all year.

There is a cinema and weekly markets.

There is a primary school on the Rue de la Rosière, as well as language and ski schools.

Bourg is also a popular summer destination, as it offers much to lovers of the outdoors and watersports. There is a whitewater slalom course on the Isere river used for international canoe and kayak competitions. The course on the Isere has been host to the ICF world championships and is used by many European teams as a training course in the summer. The course is often changed by the floods that occur during the winter months.

The surrounding mountains are good for walking and mountain biking. They also are a good place for paragliding and hang gliding. Some of Les Arcs ski lifts operate during July and August to get walkers to the higher peaks and you can take mountain bikes up on these. Mountain bikes (vélo tout terrain or VTT in French) can be hired in both Bourg and Les Arcs. Some of the high altitude restaurants open in these months, the ones at Pre st Esprit and L'Arpete have small outdoor pools.

The nearest summer glacier skiing is in Tignes (approximately 27 km from Bourg) on the Grande Motte; due to glacial recession, however, it is now closed at certain times of the year.

The French ski mountaineer Bertrand Blanc was born in Bourg-Saint-Maurice on 29 October 1973. It is also the birthplace of French politician Hervé Gaymard (31 May 1960).

Isère is a department in the Auvergne-Rhône-Alpes region in Southeastern France. Named after the river Isère, it had a population of 1,252,912 in 2016. Its prefecture is Grenoble. 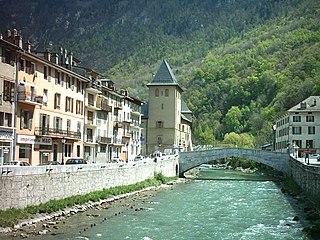 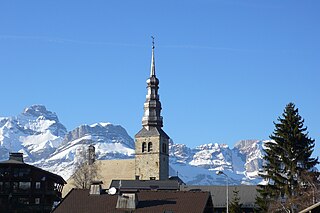 Bellentre is a former commune in the Savoie department in the region of Auvergne-Rhône-Alpes in south-eastern France. On 1 January 2016, it was merged into the new commune of La Plagne-Tarentaise.

Ariolica was an ancient station and village on the road over the Graian Alps, immediately at the foot of the passage of the mountain itself. The Tabula, in which alone the name occurs, places it 6 M. P. from the station on the summit of the pass, and 16 from Arebrigium ; but this last distance is greatly overstated, and should certainly be corrected into 6, as the distances in the Table would in this case coincide with those in the Antonine Itinerary, which gives 24 miles in all from Arebrigium to Bergintrum, and this is just about the truth. Ariolica probably occupied the same site as La Thuile, Italy in the first little plain or opening of the valley which occurs on the descent into Italy. The name is erroneously given as Artolica in the older editions of the Tabula, but the original has Ariolica.

Ouvrage Chatelard is a lesser work of the Maginot Line's Alpine extension, the Alpine Line, also known as the Little Maginot Line. Begun in 1938, the ouvrage consists of one infantry block about one kilometer northeast of Bourg St. Maurice, in the village of Le Chatelard. A short gallery with cross galleries extends into the rock, with an emergency exit and ventilation shaft halfway back. The ouvrage was incomplete in 1940, under the command of Sub-Lieutenant Bochaton. 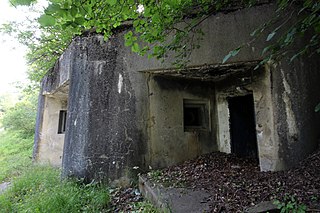 Ouvrage Cave-à-Canon is a lesser work of the Maginot Line's Alpine extension, the Alpine Line. Started in 1937, the ouvrage consists of one infantry block about one kilometer east of Bourg St. Maurice, on the south bank of the Isère. A short gallery with cross galleries extends into the rock, with an emergency exit and ventilation shaft halfway back. The ouvrage was incomplete in 1940, under the command of Lieutenant Courteaud.

Villaroger is a commune in the Savoie department in the Auvergne-Rhône-Alpes region in south-eastern France. It is situated in the upper Tarentaise Valley, between Bourg-Saint-Maurice and Tignes. 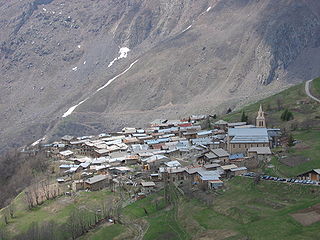 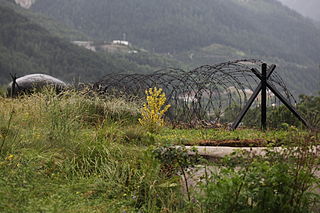