Last updated November 28, 2022
Annual award for writing a children's book published in the U.K.
Not to be confused with Andrew Carnegie Medals for Excellence in Fiction and Nonfiction.

The Carnegie Medal is a British literary award that annually recognises one outstanding new English-language book for children or young adults. It is conferred upon the author by the Chartered Institute of Library and Information Professionals (CILIP). [1] CILIP calls it "the UK's oldest and most prestigious book award for children's writing". [2]

The Medal is named after the Scottish-born American philanthropist Andrew Carnegie (1835–1919), who founded more than 2,800 libraries in the English-speaking world, including at least one in more than half of British library authorities. [1] It was established in 1936 by the British Library Association, to celebrate the centenary of Carnegie's birth [1] [3] and inaugurated in 1937 with the award to Arthur Ransome for Pigeon Post (1936) and the identification of two 'commended' books. The first Medal was dated 1936, but since 2007 the Medal has been dated by its year of presentation, which is now one or two years after publication. [4]

Nominated books must be written in English and first published in the UK during the preceding school year (September to August). [6] Until 1969, the award was limited to books by British authors first published in England. [7] The first non-British medalist was Australian author Ivan Southall for Josh (1972). The original rules also prohibited winning authors from future consideration. [7] The first author to win a second Carnegie Medal was Peter Dickinson in 1981, who won consecutively for Tulku and City of Gold . There were eight repeat winners to 2018.

The winner is awarded a gold medal and £500 worth of books donated to the winner's chosen library. In addition, since 2016 the winner has received a £5,000 cash prize from the Colin Mears bequest. [1] [8]

Recommended ages have ranged from 8+ to 14+ for books on the shortlist since 2001.

CILIP members may nominate books each September and October, with the full list of valid nominations published in November. [11] The longlist, chosen by the judges from the nominated books, is published in February. The judging panel comprises 12 children's librarians, all of whom are members of CILIP's Youth Libraries Group (YLG). The shortlist is announced in March and the winner in June. [11]

Titles must be English-language works first published in the UK during the preceding year (1 September to 31 August). According to CILIP, "all categories of books, including poetry, non-fiction and graphic novels, in print or ebook format, for children and young people are eligible". [6] Multiple-author anthologies are excluded; however, co-authored single works are eligible. [6]

Young people from across the UK take part in shadowing groups organised by secondary schools and public libraries, to read and discuss the shortlisted books. [11]

CILIP instructs the judging panel to consider plot, characterisation, and style "where appropriate". [6] Furthermore, it states that "the book that wins the Carnegie Medal should be a book of outstanding literary quality. The whole work should provide pleasure, not merely from the surface enjoyment of a good read, but also the deeper subconscious satisfaction of having gone through a vicarious, but at the time of reading, a real experience that is retained afterwards". [6]

A diversity review in 2018 led to changes in the nomination and judging process to promote better representation of ethnic minority authors and books. [12]

From 2007 onward, the medals are dated by the year of presentation. Prior to this, they were dated by the calendar year of their British publication. [4]

Eight authors have won two Carnegie Medals, which was prohibited for many years.

For many years, some runners-up books were designated Highly Commended, at least 29 in 24 years from 1979 to 2002 and three previously. Among the authors who won two Medals, Anne Fine was highly commended runner-up three times (1989, 1996, 2002) and Robert Westall twice (1990, 1992). The others were highly commended once each, except for Ness who postdates the distinction, [3]

Six books have won both the Carnegie Medal and the annual Guardian Children's Fiction Prize, which was inaugurated 1967. (Dates are years of U.K. publication, and Carnegie award dates before 2006.)

Only A Monster Calls , written by Patrick Ness and illustrated by Jim Kay, has won both the Carnegie and Greenaway Medals (2012).

Only The Graveyard Book by Neil Gaiman (2009) has won both the Carnegie Medal and the equivalent American award, the Newbery Medal. [17]

Four writers have won both the Carnegie and the US Michael L. Printz Award. The Printz Award is an American Library Association literary award that annually recognises the "best book written for teens, based entirely on its literary merit". The four writers are David Almond, Aidan Chambers, Geraldine McCaughrean, and Meg Rosoff. Chambers alone has won both for the same book, the 1999 Carnegie and 2003 Printz for the novel Postcards from No Man's Land . [4] [19] [20]

In its scope, books for children or young adults, the British Carnegie corresponds to the American Newbery and Printz awards.

To commemorate the 70th anniversary of the Carnegie Medal in 2007, CILIP created a 'Living Archive' on the Carnegie Medal website with information about each of the winning books and conducted a poll to identify the nation's favourite Carnegie Medal winner, to be named the "Carnegie of Carnegies". The winner, announced on 21 June 2007 at the British Library, [15] was Northern Lights by Philip Pullman (1995). It was the expected winner, garnering 40% of the votes in the UK, and 36% worldwide. [21]

Northern Lights, with 40% of the public vote, was followed by 16% for Tom's Midnight Garden by Philippa Pearce and 8% for Skellig by David Almond. As those three books had won the 70-year-old Medal in its year 60, year 23, and year 63, some commentary observed that Tom's Midnight Garden had passed a test of time that the others had not yet faced. [22]

Date is year of publication before 2006. [4] Selections were announced and medals presented early in the next year.

The special commendation to Harold Jones in 1955 for his 1954 illustration of Lavender's Blue was "a major reason" for the Library Association to establish the Kate Greenaway Medal that year. [3] No 1955 work was judged worthy in 1956, so that Medal was actually inaugurated one year later.

1966 (no Medal awarded)
+ Norman Denny and Josephine Filmer-Sankey, The Bayeux Tapestry: The Story of the Norman Conquest, 1066 — about the Bayeux Tapestry
1967
+ Henry Treece, The Dream Time

Through 2002 some runners-up were Commended, including some Highly Commended. [3] [lower-alpha 4] Where the entire shortlist is given here (back to 1994), boldface and asterisk (*) marks the winner, plus (+) marks the highly commended books, and dash (–) marks the commended books. [3]

Runners-up within the shortlist are not distinguished since 2002.

Date is year of presentation after 2006. [4] The publication year is approximately the preceding school year; for 2012 example, September 2010 to August 2011.

The award to Brooks roused some controversy because of the bleak nature of the novel. [36]

The Hate U Give received an Amnesty CILIP Honour commendation. [42]

The Guardian Children's Fiction Prize or Guardian Award was a literary award that annual recognised one fiction book written for children or young adults and published in the United Kingdom. It was conferred upon the author of the book by The Guardian newspaper, which established it in 1965 and inaugurated it in 1967. It was a lifetime award in that previous winners were not eligible. At least from 2000 the prize was £1,500. The prize was apparently discontinued after 2016, though no formal announcement appears to have been made.

The Kate Greenaway Medal is a British literary award that annually recognises "distinguished illustration in a book for children". It is conferred upon the illustrator by the Chartered Institute of Library and Information Professionals (CILIP) which inherited it from the Library Association. 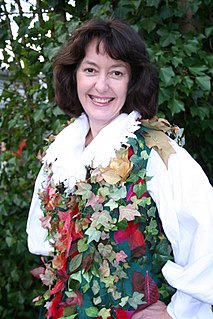 Helen Sonia Cooper is a British illustrator and an author of children's literature. She grew up in Cumbria, where she practiced literature and piano playing. She currently lives in Oxford. 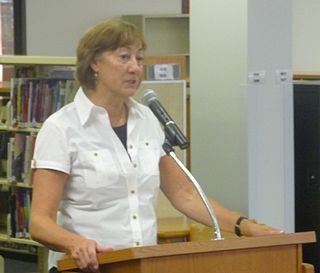 Sharon Creech is an American writer of children's novels. She was the first American winner of the Carnegie Medal for British children's books and the first person to win both the American Newbery Medal and the British Carnegie.

Chris Riddell is a South African-born British illustrator and occasional writer of children's books and a political cartoonist for the Observer. He has won three Kate Greenaway Medals - the British librarians' annual award for the best-illustrated children's book, and two of his works were commended runners-up, a distinction dropped after 2002.

Michael Foreman is a British author and illustrator, one of the best-known and most prolific creators of children's books. He won the 1982 and 1989 Kate Greenaway Medals for British children's book illustration and he was a commended runner-up five times. 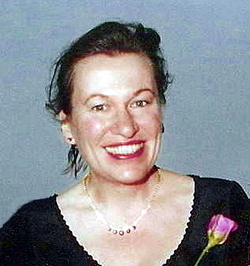 Siobhan Dowd was a British writer and activist. The last book she completed, Bog Child, posthumously won the 2009 Carnegie Medal from the professional librarians, recognising the year's best book for children or young adults published in the UK. 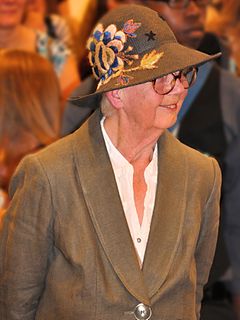 Winifred Shirley Hughes was an English author and illustrator. She wrote more than fifty books, which have sold more than 11.5 million copies, and illustrated more than two hundred. As of 2007, she lived in London.

The Blue Peter Book Awards were a set of literary awards for children's books conferred by the BBC television programme Blue Peter. They were inaugurated in 2000 for books published in 1999. The Awards have been managed by reading charity, Booktrust, since 2006. As of 2013, there are two award categories: Best Story and Best Book with Facts.

City of Gold and other stories from the Old Testament is a collection of 33 Old Testament Bible stories retold for children by Peter Dickinson, illustrated by Michael Foreman, and published by Victor Gollancz Ltd in 1980. The British Library Association awarded Dickinson his second Carnegie Medal recognising the year's outstanding children's book by a British subject and highly commended Foreman for the companion Kate Greenaway Medal.

Anthony Edward Tudor Browne is a British writer and illustrator of children's books, primarily picture books. Browne has written or illustrated over fifty books, and received the Hans Christian Andersen Award in 2000. From 2009 to 2011 he was Children's Laureate.

Helen Gillian Oxenbury is an English illustrator and writer of children's picture books. She lives in North London. She has twice won the annual Kate Greenaway Medal, the British librarians' award for illustration and been runner-up four times. For the 50th anniversary of that Medal (1955–2005) her 1999 illustrated edition of Alice's Adventures in Wonderland was named one of the top ten winning works.

Patrick Ness is a British-American author, journalist, lecturer, and screenwriter. Born in the United States, Ness moved to London and holds dual citizenship. He is best known for his books for young adults, including the Chaos Walking trilogy and A Monster Calls.

Gerald Hembdon Seymour Rose is a British illustrator of children's books. He won the 1960 Kate Greenaway Medal from the Library Association, recognising the year's best children's book illustration by a British subject, for Old Winkle and the Seagulls, written by his wife Elizabeth (Liz) Rose and published by Faber and Faber.