Castle Oliver (also Clonodfoy) is a Victorian castle in the south part of County Limerick, Ireland. Built for entertaining rather than for defense, it has a ballroom, drawing room, library, morning room, dining room and hall which feature hand-painted ceilings, decorated ornamental corbels, superbly executed stained glass windows and stencil work. The castle stands on massive terraces and has a commanding view over much of its former 20,000-acre (81 km2) estate. The castle has Ireland's largest wine cellar, said to hold approximately 55,000 bottles. From May to September 2014, Castle Oliver was opened to the public in conjunction with "Limerick City of Culture" for house tours.

The lands where the castle stands were settled in about 1658 by Capt. Robert Oliver, one of Oliver Cromwell's soldiers. The present castle replaced the former Castle Oliver, which stood a thousand yards to the south-west and was the birthplace of Eliza Oliver, mother of the notorious Lola Montez, who became the lover and favourite of King Ludwig I of Bavaria.

The castle was for many years known as Clonodfoy, a contraction of an earlier Irish place name: Cloch an Otbhaidhigh, meaning 'the stone structure of Otway', Otway being an Anglo-Norman family name.

Capt. Robert Oliver's descendant Richard Oliver married a Yorkshire heiress through whom he inherited substantial wealth and property in West Yorkshire and moved away to live in Parlington Hall near Leeds, leaving Castle Oliver to deteriorate in the hands of a bailiff. Their daughters, Mary Isabella and Elizabeth Oliver Gascoigne, both married members of the Trench family of Woodlawn, Galway. The younger sister, Elizabeth, married Frederic Mason Trench, 2nd Baron Ashtown in 1852. The sisters were highly accomplished artisans, designing and executing both the stained glass work and verre eglomise (back painted glass panels) which ornamented the ballroom fireplace. Much of their work has survived. The elder sister, Mary Isabella, was a highly skilled wood-turner who published (under a male pseudonym) an authoritative book on the subject, "The Art of Wood-Turning", still a respected source of information on the subject.

The sisters commissioned the present castle in 1845. It was designed by the York architect George Fowler Jones in the Scottish Baronial style and built in a local pink sandstone, quarried on the estate. Fowler Jones had designed several substantial commissions for the sisters in the north of England, including almshouses and churches. Whilst Mary Isabella and her husband made their home in the Yorkshire seat of the Gascoignes (Parlington Hall), Elizabeth and her husband occupied Castle Oliver. The house was later inherited by Elizabeth's step-grandson, the Honourable William Cosby Trench.

The last member of the Trench family to live at Castle Oliver, Mrs Lynn Trench, sold the property to the racing driver Billy Coleman in 1978. After that the castle changed hands several times, eventually becoming the property of a local bank, who broke up the remaining land, farm and lodges into separate lots. The castle itself failed to find a buyer and languished into decay, falling prey to vandals and thieves. It appeared in the book "Vanishing Houses of Ireland", published by the Irish Georgian Society.

In 1988 it was purchased by Damian Haughton, who according to the subsequent owner, put a halt to most of the worst leaks in the roof. In 1998 it was purchased by Nicholas Browne, who continued the restoration work and transformed it back into a habitable residence. In 2006 Castle Oliver was purchased by Declan and Emma Cormack from County Antrim. They completed high-grade restoration work, restoring many of the original rooms and features, such as the Library, St Patrick's stained glass window, wooden panelling, cornices and many fireplaces. They made the castle their home with their three children Michael, Shane and Ciara. In 2015 the Cormacks sold it to an unnamed family from Melbourne, Australia to use as a home for "several months of the year". [1] 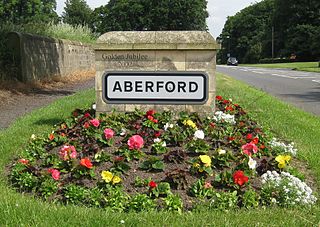 Aberford is a village and civil parish on the eastern outskirts of the City of Leeds metropolitan borough in West Yorkshire, England. It had a population of 1,059 at the 2001 census, increasing to 1,180 at the 2011 Census. It is situated 10 miles (15.5 km) east, north east of Leeds city centre in the LS25 Leeds postcode area. 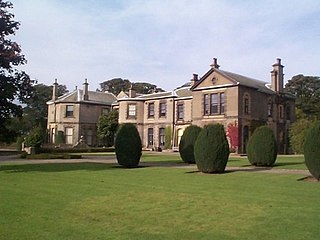 Lotherton Hall is a country house near Aberford, West Yorkshire, England. It lies a short distance from the A1(M) motorway, 200 miles (320 km) equidistant between London and Edinburgh. It is one of nine sites in the Leeds Museums & Galleries group. 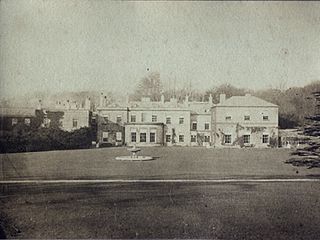 Parlington Hall was the seat of the Gascoigne family, Aberford near Leeds in West Yorkshire, England. 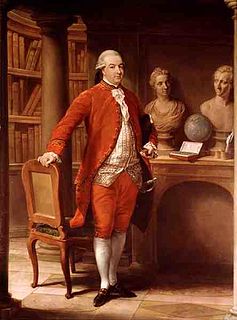 The Gascoigne Baronetcy, of Barnbow and Parlington in the County of York, was a title in the Baronetage of Nova Scotia. It was created on 8 June 1635 for John Gascoigne. He had converted to Roman Catholicism in 1604. His daughter, Catherine Gascoigne, went to Cambrai where she became an abbess. Gascoigne's son Sir Thomas, 2nd Baronet, was accused of conspiracy to murder King Charles II as part of the mythical Popish Plot, but acquitted. The eighth Baronet was Member of Parliament for Thirsk, Malton and Arundel. He renounced Catholicism, and was much involved in the Irish Parliament and in horse racing. Sir Thomas died in 1810, the year after his only son died in a hunting accident, upon which the baronetcy became either extinct or dormant.

Cosby Godolphin Trench DL, JP, styled The Honourable from 1855, was a British soldier and magistrate. 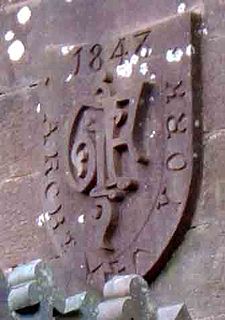 George Fowler Jones was an architect and early amateur photographer who was born in Scotland but based for most of his working life in York.

The Oliver Gascoigne family originated at the point that Richard Oliver, originally of Castle Oliver, Limerick, Ireland, inherited the fortune of Sir Thomas Gascoigne of Parlington Hall, Yorkshire, in 1810. Sir Thomas made it a stipulation of his will that Richard add 'Gascoigne' to his name. Richard had married Sir Thomas's stepdaughter, Mary Turner, in 1804. Richard and Mary had two daughters, Isabella and Elizabeth, who inherited their parents' fortune in 1843. The sisters demolished their ancestral home in Ireland, and built a new Castle Oliver a few hundred yards to the north east. The castle still exists. 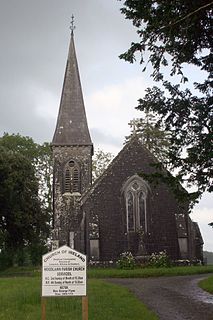 Thomas Gascoigne was a Yorkshire land and coal-owner. 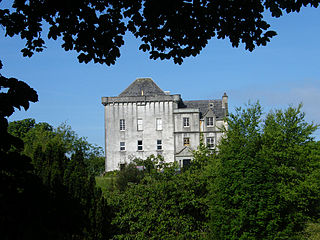 Craignish Castle is located on the Craignish peninsula in Argyll, western Scotland. The present castle includes a 16th-century tower, the seat of the Campbell family of Craignish and Jura. In the 19th century it was sold to the Trench-Gascoigne family of Parlington Hall, Yorkshire, who built a large extension to the tower. In the later 20th century the house was restored, and parts of the 19th-century extension were demolished.

Sir Thomas Gascoigne, 8th Baronet was born on 7 March 1745 on the Continent into a devout Catholic gentry family based in Yorkshire. Despite receiving a solid Catholic education at institutions in northern France and Italy, Gascoigne would later renounce his religion to become a Foxite Whig Member of Parliament. Prior to his apostasy he travelled extensively as a Grand Tourist throughout much of Spain, France and Italy in the company of the noted travel writer Henry Swinburne, who would later record their journeys in two popular travel guides Travels through Spain in the Years 1775 and 1776 (1779) and Travels in the Two Sicilies, 1777–1780 (1783–5). Together they gained close access to the leading courts of Europe, particularly in Spain and Naples. An honorary member of the Board of Agriculture, Gascoigne was an important advocate of agricultural reform as well as a considerable coal owner who helped pioneer technological developments in the extractive industries. He is emblematic of how movements within the Enlightenment were having a major influence on the attitudes, activities and outlook of many leading English Catholic gentry families in the period.

The Aberford Railway was a privately owned light railway built in the 19th century between Garforth and Aberford (UK) by the Gascoigne family of Yorkshire to transport coal from their collieries via the Great North Road and a connection with the contemporary Leeds and Selby Railway.

Elizabeth Gascoigne was the heiress to the Gascoigne estate, eventually becoming the main owner of Lotherton Hall in Leeds which is now owned by Leeds City Council as part of the Leeds Museums and Galleries. She was a woman of many talents, dabbling in writing books, designing stained glass windows, playing the harp and being a charitable contributor to the community of Leeds, mainly Aberford in Yorkshire and Ashtown in Ireland. Her works in stained glass have been displayed in exhibitions, and many of the buildings her and her sister commissioned are still part of the communities that they lived in.