This article refers to the use of computers to estimate losses caused by disasters. For other meanings of the word catastrophe, including catastrophe theory in mathematics, see catastrophe (disambiguation).

Catastrophe modeling [1] (also known as cat modeling) is the process of using computer-assisted calculations to estimate the losses that could be sustained due to a catastrophic event such as a hurricane or earthquake. Cat modeling is especially applicable to analyzing risks in the insurance industry and is at the confluence of actuarial science, engineering, meteorology, and seismology.

Natural catastrophes (sometimes referred to as "nat cat") [2] that are modeled include:

Cat modeling involves many lines of business [4] , including:

Inputs, Outputs, and Use Cases

The input into a typical cat modeling software package is information on the exposures being analyzed that are vulnerable to catastrophe risk. The exposure data can be categorized into three basic groups:

The output of a cat model is an estimate of the losses that the model predicts would be associated with a particular event or set of events. When running a probabilistic model, the output is either a probabilistic loss distribution or a set of events that could be used to create a loss distribution; probable maximum losses ("PMLs") and average annual losses ("AALs") are calculated from the loss distribution. [6] When running a deterministic model, losses caused by a specific event are calculated; for example, Hurricane Katrina or "a magnitude 8.0 earthquake in downtown San Francisco" could be analyzed against the portfolio of exposures.

Cat models have a variety of use cases for a number of industries [7] , including:

The Oasis Loss Modelling Framework ("LMF") is an open source catastrophe modeling platform. It developed by a nonprofit organisation funded and owned by the Insurance Industry to promote open access to models and to promote transparency. [8] Additionally, some firms within the insurance industry are currently working with the Association for Cooperative Operations Research and Development ("ACORD") to develop an industry standard for collecting and sharing exposure data. [9] 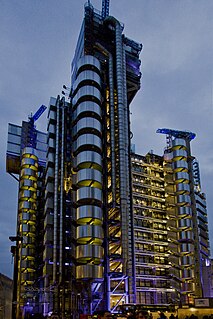 Lloyd's of London, generally known simply as Lloyd's, is an insurance and reinsurance market located in London, United Kingdom. Unlike most of its competitors in the industry, it is not an insurance company; rather, Lloyd's is a corporate body governed by the Lloyd's Act 1871 and subsequent Acts of Parliament. It operates as a partially-mutualised marketplace within which multiple financial backers, grouped in syndicates, come together to pool and spread risk. These underwriters, or "members", are a collection of both corporations and private individuals, the latter being traditionally known as "Names".

Earthquake insurance is a form of property insurance that pays the policyholder in the event of an earthquake that causes damage to the property. Most ordinary homeowners insurance policies do not cover earthquake damage.

Home insurance, also commonly called homeowner's insurance, is a type of property insurance that covers a private residence. It is an insurance policy that combines various personal insurance protections, which can include losses occurring to one's home, its contents, loss of use, or loss of other personal possessions of the homeowner, as well as liability insurance for accidents that may happen at the home or at the hands of the homeowner within the policy territory.

A risk pool is one of the forms of risk management mostly practiced by insurance companies. Under this system, insurance companies come together to form a pool, which can provide protection to insurance companies against catastrophic risks such as floods or earthquakes. The term is also used to describe the pooling of similar risks derlies the concept of insurance. While risk pooling is necessary for insurance to work, not all risks can be effectively pooled in a voluntary insurance bracket, unless there is a subsidy available to encourage participation.

Financial Reinsurance, is a form of reinsurance which is focused more on capital management than on risk transfer. In the non-life segment of the insurance industry this class of transactions is often referred to as finite reinsurance.

Parametric insurance is a type of insurance that does not indemnify the pure loss, but ex ante agrees to make a payment upon the occurrence of a triggering event. The triggering event is often a catastrophic natural event which may ordinarily precipitate a loss or a series of losses. But parametric insurance principles are also applied to agricultural crop insurance and other normal risks not of the nature of disaster, if the outcome of the risk is correlated to a parameter or an index of parameters. 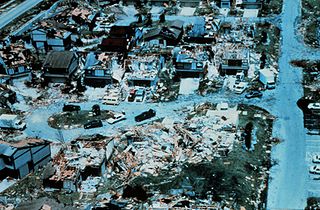 Catastrophe bonds are risk-linked securities that transfer a specified set of risks from a sponsor to investors. They were created and first used in the mid-1990s in the aftermath of Hurricane Andrew and the Northridge earthquake.

Reinsurance sidecars, conventionally referred to as "sidecars", are financial structures that are created to allow investors to take on the risk and return of a group of insurance policies written by an insurer or reinsurer and earn the risk and return that arises from that business. A re/insurer will only pay ("cede") the premiums associated with a book of business to such an entity if the investors place sufficient funds in the vehicle to ensure that it can meet claims if they arise. Typically, the liability of investors is limited to these funds. These structures have become quite prominent in the aftermath of Hurricane Katrina as a vehicle for re/insurers to add risk-bearing capacity, and for investors to participate in the potential profits resulting from sharp price increases in re/insurance over the four quarters following Katrina. An earlier and smaller generation of sidecars were created after 9/11 for the same purpose.

Industry loss warranties (ILWs), are a type of reinsurance contract used in the insurance industry through which one party will purchase protection based on the total loss arising from an event to the entire insurance industry above a certain trigger level rather than their own losses.

CRESTA was founded as a joint project of Swiss Reinsurance Company, Gerling-Konzern Globale Reinsurance Company, and Munich Reinsurance Company. CRESTA has set itself the aim of establishing a globally uniform system for the accumulation risk control of natural hazards - particularly earthquakes, storms and floods. Those risk zones are essentially based on the observed and expected seismic activity, as well as on other natural disasters, such as droughts, floods and storms. CRESTA zones regard the distribution of insured values within a region or country for easier assessment of risks. CRESTA Zones are the essential basis for reinsurance negotiation and portfolio analysis. Nowadays, CRESTA sets widely accepted standards which apply throughout the international insurance industry. CRESTA zone information is used by most insurers for assessing the insurance catastrophe premiums they will charge.

The Solvency II Directive is a Directive in European Union law that codifies and harmonises the EU insurance regulation. Primarily this concerns the amount of capital that EU insurance companies must hold to reduce the risk of insolvency.

Insurance-linked securities (ILS) are broadly defined as financial instruments whose values are driven by insurance loss events. Those such instruments that are linked to property losses due to natural catastrophes represent a unique asset class, the return from which is uncorrelated with that of the general financial market.

Cuthbert Eden Heath OBE, DL was a British insurance businessman, underwriter, broker, and syndicate owner at Lloyd's of London from 1880 until 1939. A relentless innovator and novel risk-taker, he has been called "the father of modern insurance", "the maker of modern Lloyd's", and "the father of non-marine insurance at Lloyd's", having through his actions transformed Lloyd's from a British marine-only insurer to the complex and varied international general and specialty-risk insurer it is today, and having cemented Lloyd's sterling reputation, as a reliable insurer which promptly and fully paid all valid claims, in the U.S. and throughout the world.