Chetnole railway station is a small rural station serving the village of Chetnole,Dorset,England. The station is on the Heart of Wessex Line 21¼ miles (34 km) north of Weymouth towards Westbury,and 147.5 miles (237.4 kilometres) from the zero point at London Paddington,measured via Swindon and Westbury. [1]

The station was opened on 11 September 1933, [2] being originally built of timber. This was replaced by a concrete structure,believed to be in the 1960s.[ by whom? ] The line was converted to a single track in 1968.[ citation needed ]

Chetnole only has the most basic facilities,being a small waiting area (including a payphone), [3] a help point,bike racks and some information boards including timetable posters. There is no step-free access. [4]

Great Western Railway operate services between Gloucester and Weymouth via Bristol Temple Meads and Westbury (8 per day each way on weekdays and Saturdays,3-5 each way on Sundays depending on the time of year). South Western Railway used to run additional services between Weymouth and Yeovil Junction on Summer Saturdays. [5] The station is a request stop,meaning passengers wishing to board a train need to signal clearly to the driver as the train approaches.

Aldermaston railway station serves the village of Aldermaston in Berkshire,England. The station is at nearby Aldermaston Wharf and about 2 miles (3 km) north of Aldermaston village. It is 44 miles 63 chains measured from London Paddington. 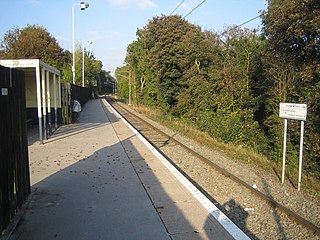 Park Street railway station serves the village of Park Street,Hertfordshire,England. It is the penultimate station on the Abbey Line. The station and all trains serving it are operated by London Northwestern Railway.

Mosspark railway station serves the Pollok and Cardonald areas of Glasgow,Scotland. The station is on the Paisley Canal Line,3¾ miles (6 km) west of Glasgow Central and is managed by ScotRail. 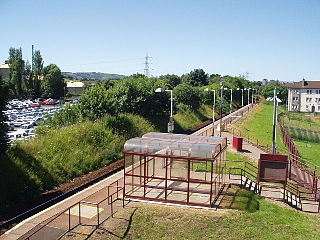 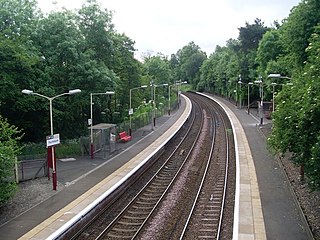 Bailey Gate railway station was on the Somerset &Dorset Joint Railway in the English county of Dorset.

Avoncliff railway station serves the hamlet of Avoncliff in Wiltshire,England,together with the nearby villages of Westwood and Winsley,and Turleigh hamlet. It is next to the Kennet and Avon Canal and almost adjacent to the Avoncliff Aqueduct,so it is popular with walkers and cyclists who wish to travel along the canal path or the picturesque walks around the station. 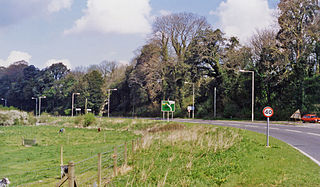 Grimstone and Frampton railway station was a station on the Wiltshire,Somerset &Weymouth Railway,part of the Great Western Railway between Maiden Newton and Dorchester. It was in the hamlet of Grimstone which was in the parish of Stratton but also relatively close to the parish of Frampton which it was also intended to serve. It was directly south of Grimstone Viaduct.

Bradford Peverell and Stratton Halt was a station on the Great Western Railway on what had originally been part of the Wiltshire,Somerset &Weymouth Railway. It was in the parish of Stratton just east of the main part of the village but also close to the parish of Bradford Peverell which it was also intended to serve. The relatively modern looking concrete platforms and shelters,standard products of the former Southern Railway concrete factory at Exmouth Junction,can still be seen next to the bridge carrying the line over the A37 Dorchester - Yeovil road.

Monkton and Came Halt was a railway station between Weymouth and Dorchester in the county of Dorset in England. It was on what is now the Heart of Wessex Line and South West Main Line.

Charlton Marshall Halt was a station in the English county of Dorset. It was located between Blandford Forum and Bailey Gate on the Somerset and Dorset Joint Railway. The station consisted of two short platforms and shelters.

Evershot was a railway station in the county of Dorset in England. Served by trains on what is now known as the Heart of Wessex Line,it was two miles from the village it served,at Holywell,just south of Evershot Tunnel. The station consisted of two platforms,a small goods yard and signal box. It had a station building on the up platform.

Cattistock Halt railway station was a railway station in the county of Dorset in England. It was served by trains on what is now known as the Heart of Wessex Line. The station was initially timber but was rebuilt in 1959:the two platforms each with a concrete shelter were standard products of the former Southern Railway concrete factory at Exmouth Junction.

Bridport East Street was a railway station on the Bridport Railway in the west of the English county of Dorset. Opened on 11 March 1884,before the extension terminus at West Bay,it was just south of the level crossing on the A35 Dorchester to Honiton road,slightly nearer the centre of Bridport than the main station at Bradpole Road. Closed during the First World War and again in 1921,the station closed permanently with the West Bay extension on 22 September 1930,when the Great Western Railway gave up on hopes of creating a resort at West Bay. 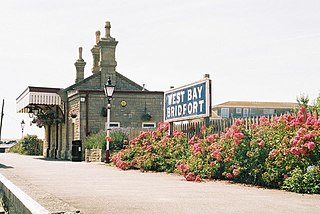 West Bay railway station was the terminus of the Bridport Railway in western Dorset,England. In 1879,the Great Western Railway,who held the operating licence for the original Bridport Railway,decided to extend the railway to Bridport Harbour. Construction started in 1883,and the line opened on 31 March 1884. The station was called West Bay by the GWR in order to encourage holiday traffic. The line between West Bay and Bridport closed to passengers in 1930,and operated for goods services only until its final closure in 1962.

Melcombe Regis was a station on the Portland Branch Railway in the English county of Dorset. Opened in April 1909,it was sited at the north end of the bridge over Radipole Lake. The station was built to enable Portland branch passengers to go to Weymouth without the need for the branch train to reverse to enter Weymouth railway station. The branch junction was to the north of Weymouth station and faced Dorchester. The station was closed officially,along with the branch,on 3 March 1952. However,the station continued to be used for overflow from the adjacent Weymouth station,particularly on summer Saturdays:regularly until 12 September 1959 and irregularly for a while after that.

Easton railway station was the terminus of the Portland Branch Railway,which operated on the Isle of Portland in the south of the English county of Dorset. The station opened with the Easton and Church Hope Railway,one of the constituent parts of a complex line,on 1 September 1902. The line past Portland station was technically a separate railway,although the branch was operated as one line throughout. Easton was closed from 11 November 1940 to 1 January 1945 following air raid damage. Although the station closed to passengers in 1952 regular freight kept the line in use until 1965. The station was demolished in the 1970s.