The Heart of Wessex Line, also known as the Bristol to Weymouth Line, is a railway line that runs from Bristol Temple Meads to Westbury and Weymouth in England. It shares the Wessex Main Line as far as Westbury and then follows the course of the Reading to Taunton Line as far as Castle Cary.

The cities, towns and villages served by this route are listed below: [2]

Most Great Western services originate from Bristol Temple Meads or Westbury. Some originate from towns and cities beyond Bristol such as Gloucester, Cheltenham and Great Malvern. [2]

Services are typically operated with Class 165 and Class 166 "Networker Turbo" trains. These were introduced in the late 2010s after they were released from the Thames Valley during the modernisation of the Great Western Main Line. [4] South Western Railway services are operated by Class 159s and sometimes Class 158.

Before the introduction of the Networker Turbo trains, the route was typically operated with Sprinter diesel multiple unit trains, typically of 2 or 3 coach Class 150, with some Class 158 trains.

Past rolling stock has included locomotive-hauled trains, including British Railways Mark 2 coaches hauled by Class 67 used to strengthen high-demand summer Saturday services in 2008–2010 between Bristol and the seaside resort of Weymouth.

A Bristol to Weymouth Rail Partnership was created in 1998 so that local authorities could support the line. In 2003 this was rebranded as the Heart of Wessex partnership and line. [5] It is designated as a community rail line. [6] 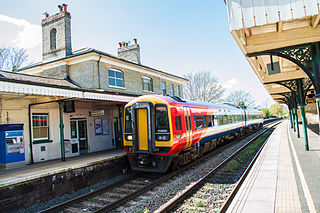 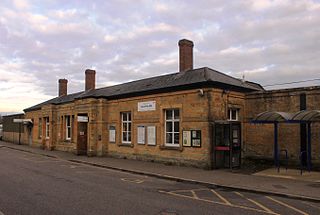 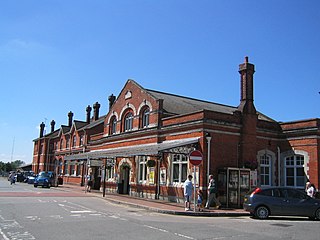 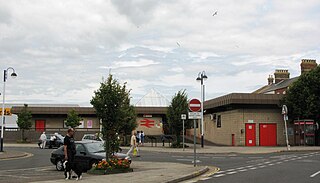 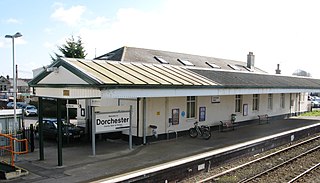 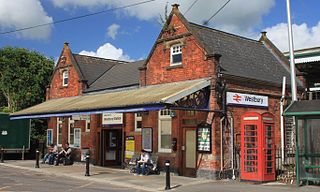 Westbury railway station serves the town of Westbury in Wiltshire, England. The station is managed by Great Western Railway.

Keynsham railway station is on the Great Western Main Line in South West England, serving the town of Keynsham, Somerset. It is 113 miles 63 chains (183.1 km) down the line from London Paddington and is situated between Oldfield Park and Bristol Temple Meads stations.

Thornford railway station serves the village of Thornford, in Dorset, England. It is approximately 3 miles to the south of Yeovil, and 144.35 miles from the zero point at London Paddington. It is managed by Great Western Railway and is served by trains on the Heart of Wessex Line between Bristol Temple Meads and Weymouth.

Frome railway station serves a largely rural area of the county of Somerset in England, and is situated in the town of Frome. The station is located on a 1.5 miles (2.4 km) long branch line which loops off the main line railway, which carries services on both the Reading to Taunton line and Bristol to Weymouth route. Most of the trains which take the loop line in order to serve Frome station are on the Bristol to Weymouth route, and most trains on the Reading to Taunton line by-pass the station on the main line. The station is 22.25 miles (36 km) south of Bath Spa on the Bristol to Weymouth line, it is owned by Network Rail and is operated by Great Western Railway.

The Wilts, Somerset and Weymouth Railway (WS&WR) was an early railway company in south-western England. It obtained Parliamentary powers in 1845 to build a railway from near Chippenham to Salisbury and Weymouth. It opened the first part of the network but found it impossible to raise further money and sold its line to the Great Western Railway (GWR) in 1850.

The Langport and Castle Cary Railway is a railway line from Castle Cary railway station to Cogload Junction near Taunton, Somerset, England, which reduced the length of the journey from London to Penzance by 20+1⁄4 miles (32.6 km). 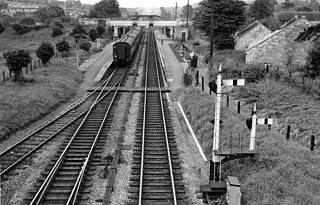 Bathampton railway station is a former railway station in Bath, UK, serving the community of Bathampton. The station opened on 2 February 1857 and closed on 3 October 1966. Very little remains, as the station site was replaced with improved trackwork for a nearby junction. The only significant remains are the gateposts at the head of the approach road.