White's music career spans more than 50 years. He came to prominence in the mid-1960s as the bass guitarist and occasional lead vocalist of the English rock band The Zombies. White is one of the main composers of the Zombies' music, and made major lyrical contributions to the band's songs. He was inducted into the Rock and Roll Hall of Fame in 2019. [1]

White was born on 7 March 1943, in Barnet, Hertfordshire, to Harold White, a bus inspector for London Transport, and his wife Nan. The family soon relocated to Markyate, Hertfordshire, where his parents Harold and Nan White owned the village general store, selling groceries, hardware, paint, and furniture. As a pastime, Harold White played double bass in dance bands performing the music of Glenn Miller and other swing bands; he gave his son his earliest musical training, playing guitar alongside White on the ukulele. There was also a piano in the house. [2] [3] White attended St Albans County Grammar School, Hertfordshire, where he met Colin Blunstone, later meeting Rod Argent, Paul Atkinson, and Hugh Grundy who were at St. Albans School, the musicians who became the Zombies. [4]

White replaced the Zombies' initial bass guitarist, Paul Arnold, [5] and became one of the band's two main songwriters, alongside Rod Argent. He wrote two tracks on their US debut album, The Zombies , released in January 1965. On the UK debut release, Begin Here , he had three tracks. For the Zombies' performances in the 1965 film Bunny Lake Is Missing White wrote "Nothing's Changed" and "Remember You". He also wrote seven of the twelve songs on the band's second and final album and generally acknowledged masterpiece, Odessey and Oracle . White also contributed lead vocals to "Butcher's Tale (Western Front 1914)" and a verse of "Brief Candles". Some releases of She's Not There attribute Chris as the composer instead of Rod Argent.

While White is not a member of The Zombies’ current lineup, he has rejoined the group on several tours featuring the surviving original lineup between 2008 and 2019 to play Odessey and Oracle in its entirety.

Following the demise of the Zombies, White contributed songwriting and production work to Colin Blunstone's solo career and Rod Argent's new band, Argent. With Argent he co-wrote their 1972 hit "Hold Your Head Up". In 2007, as part of the band White Circle, he co-wrote, co-produced and performed on the album The Key with his son Matthew White and wife Vivienne Boucherat. [7]

Also in 2007/2008, White co-produced and played on the album Featherhead for his youngest son, the London-based singer-songwriter JJ White. [8] In March 2008, White began a series of live performances with the other three surviving members of the Zombies, including the first complete performances of the album Odessey and Oracle, in celebration of the 40th anniversary of its release. [9]

Chris and his wife Vivian Boucherat provide backing vocals on the 2016 album My Religion by John Verity.

Since 2019, Chris has been releasing previously unheard material under the series name The Chris White Experience featuring performances from a host of well-known artists. As of July 2021, he has released five volumes of songs, and a previously unreleased album by the band Sparrow.

White currently resides in London. He is married to Viv Boucherat, and while they have no children together, White is father to three sons; Matthew, Jamie and Sacha. [7]

Colin Edward Michael Blunstone is an English singer, songwriter and musician. In a career spanning more than 50 years, Blunstone came to prominence in the mid 1960s as the lead singer of the English rock band the Zombies, which released four singles that entered the Top 75 charts in the United States during the 1960s, including "She's Not There", "Tell Her No", "She's Coming Home", and "Time of the Season". Blunstone began his solo career in 1969, releasing three singles under a pseudonym of Neil MacArthur. Since then, he has released ten studio albums and one live album under his real name. His solo hits include "She's Not There", "Say You Don't Mind", "I Don't Believe in Miracles", "How Could We Dare to Be Wrong", "What Becomes of the Brokenhearted", and "The Tracks of My Tears". In 2019, Blunstone was inducted into the Rock and Roll Hall of Fame as part of The Zombies.

"Time of the Season" is a song by the British rock band the Zombies, featured on their 1968 album Odessey and Oracle. It was written by keyboard player Rod Argent and recorded at Abbey Road Studios in August 1967. Over a year after its original release, the track became a surprise hit in the United States, rising to number three on the Billboard Hot 100 and number one on the Cashbox chart. It has become one of the Zombies' most popular and recognizable songs, and an iconic hit of 1960s psychedelia that continues to enjoy frequent airplay on classic rock and oldies radio. 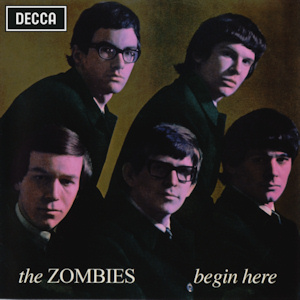 Begin Here is the debut studio album by the English Pop rock band the Zombies, released in April 1965 by Decca Records. The American version repeated many of the tracks from it, but, as was common at the time, deleted some and substituted others. 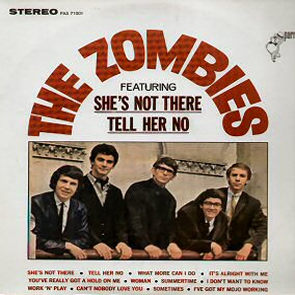 The Zombies is the debut American studio album by English pop rock band The Zombies, released in January 1965 by Parrot Records. After the success of the double-sided hit single "She's Not There" b/w "You Make Me Feel Good" reached #2 on the U.S. charts in the fall of 1964, Parrot quickly released this LP in 1965. The dozen tracks were taken from material the Zombies cut for their UK debut album, Begin Here. Also included are "It's Alright With Me" and "Sometimes" from their self-titled EP. The album also included their 2nd hit single "Tell Her No".

"She's Not There" is the debut single by British rock band the Zombies, written by keyboardist Rod Argent. It reached No. 12 in the UK Singles Chart in September 1964, and No. 2 on the Billboard Hot 100 in the United States at the beginning of December 1964. In Canada, it reached No. 2.

New World is the third album by The Zombies, recorded in 1990. Several tracks were released in Europe in 1990 on an album called The Return Of The Zombies. This album features numerous tracks from that release that were remixed or re-recorded, as well as new tracks, and was released in April 1991. According to the liner notes, it was recorded primarily to protect the name of the band in response to numerous groups of imposters that were then touring the US. Original members Rod Argent and Paul Atkinson were unavailable to join them for more than one track each.

As Far As I Can See is the fourth studio album by the British rock band the Zombies, and their first since 1991. The lineup includes three of the band's original members: Rod Argent, Colin Blunstone and Chris White, with fourth original member Paul Atkinson also serving as A&R for the record.

Paul Ashley Warren Atkinson was a British guitarist and record company executive, best known as a founding member of the pop/rock band The Zombies. Atkinson was posthumously inducted into the Rock and Roll Hall of Fame in 2019. 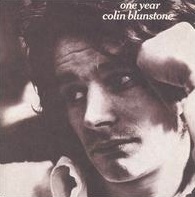 One Year is the debut solo studio album by English singer-songwriter Colin Blunstone, a member of the Zombies. It was released by Epic Records in 1971. It includes "Say You Don't Mind", which peaked at number 15 on the UK Singles Chart. 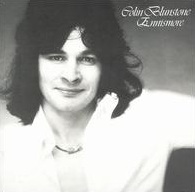 Ennismore is the second solo studio album by the English singer Colin Blunstone of rock band the Zombies. The name of the album comes from Ennismore Gardens, a square in Knightsbridge where Blunstone was living; the name is a variant spelling of the island Inishmore.

Hugh Birch Grundy is an English musician. In a career spanning more than 50 years, Grundy came to prominence in the mid 1960s as the drummer of the English rock band The Zombies. He was inducted into the Rock and Roll Hall of Fame in 2019.

"Care of Cell 44" is a single by The Zombies, from their 1968 album Odessey and Oracle. It was featured on Pitchfork Media's 200 Best Songs of the 1960s list, and has since been covered by modern artists including Elliott Smith and Of Montreal. 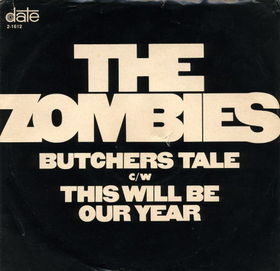 "Butcher's Tale " is a song written by Chris White and first released on The Zombies 1968 album Odessey and Oracle. It was also released as a single in the US in June 1968, backed by "This Will Be Our Year." It was recorded in one take on 20 July 1967 at EMI Abbey Road Studio No. 3. The song has also been covered by They Might Be Giants, The Immediate, John Wilkes Booze and Chrysanthemums.

"Just Out of Reach" is a song written by singer Colin Blunstone, first recorded by his band the Zombies in 1965. In 1965, it was clear that the Zombies were going to be featured in Otto Preminger's 1966 movie Bunny Lake Is Missing. Therefore, the band had struck a deal with Preminger; he wanted three new songs by the group, recorded in the span of only ten days. During this time, the band's primary songwriters, keyboardist Rod Argent and bassist Chris White suffered somewhat from writer's block. Although White had already managed to come up with two songs, "Remember You" and "Nothing's Changed", the third song was still missing, much to the group's disappointment. Therefore Blunstone was tasked with the final song. 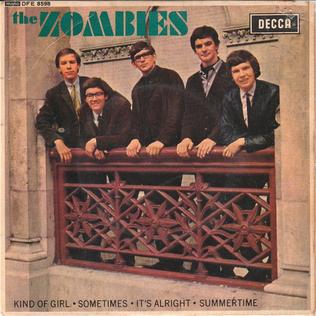 The Zombies is an extended play 45 rpm record released by the English beat group the Zombies in 1964.

R.I.P., also known as R.I.P. - The Lost Album, is a studio album by English rock band the Zombies. It was originally scheduled to be released in 1969, but was cancelled. It was finally released in Japan in October 2000 by Imperial Records. 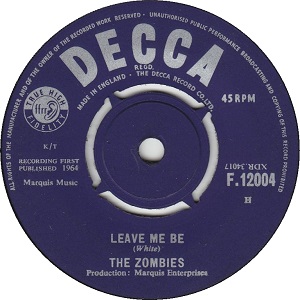 "Leave Me Be" is a song written by British bassist Chris White and recorded by his band the Zombies. Following the release of their debut single "She's Not There" in July 1964, White wrote a handful of songs in between performances during the band's heavy schedule. Most of the work on the song occurred in August 1964, when the Zombies recorded both a demo and the backing track for it. The instrumentation largely differs from both earlier and later Zombies records; it features electric organ played by Rod Argent, compared to his previous usage of the electric piano. Together with record producer Ken Jones, they returned in September to finish the vocal track, which was disliked by most band members for its similarity to "She's Not There"; the vocals would eventually be re-recorded a few months later.