Christian radio is a category of radio formats that focus on transmitting programming with a Christian message. In the United States, where it is most established, many such broadcasters play contemporary Christian music, [1] though many programs include talk or news programming covering economic, political or religious topics.

Brokered programming is a significant portion of most U.S. Christian radio stations' revenue, with stations regularly selling blocks of airtime to evangelists seeking an audience. Another revenue stream is solicitation of donations, either to the evangelists who buy the air time or to the stations or their owners themselves. In order to further encourage donations, certain evangelists may emphasize the prosperity gospel, in which they preach that tithing and donations to the ministry will result in financial blessings from God. Others may have special days of the year dedicated to fundraising, similar to many NPR stations. Although the solicitation of donations and the sale of airtime may resemble a commercial enterprise, such actions do not necessarily constitute a call to action, and thus this does not forbid them from airing on noncommercial licensed stations in the U.S. A minority of stations, typically music stations, use the traditional model for music radio and allow traditional commercial advertising. [1]

Numerous religious broadcasters own many of their own stations. In the U.S., religious radio stations are exempt from certain rules requiring radio stations to have some local operations, which allows them to have massive networks of transmitters covering far larger areas than a radio station would otherwise be allowed.

Most Christian radio stations transmit a mixture of Christian music and Christian talk and teaching.

Many non-religious radio stations devote some of their weekend programming to Christian music; for example, Black Gospel programming is common on Sundays on many stations featuring the Urban Contemporary format.

Other Christian stations will present a no-music format that features talk radio-style programming (sometimes including live radio call-in shows) and/or long-form "preaching and teaching" programs. Notable examples include Focus on the Family with host Jim Daly, Amazing Facts , Living Way with pastor Jack Hayford, and Pastor Rick's Daily Hope; an example of an inspirational program are Moments of Melody and The Voice of Prophecy. Radio drama programs, long dead in most other radio formats, continue to be transmitted on Christian radio; notable examples include long-running Adventures in Odyssey , Patch the Pirate , and Unshackled! and relative newcomers such as Down Gilead Lane and A Work in Progress.

Most Christian radio stations as well as programmers based in the United States are members of the National Religious Broadcasters, a Christian organization. There are reportedly 1,600 Christian broadcasting organizations in the U.S. They range from single stations to expansive networks. It is common for religious broadcasters to purchase many small broadcast translators to create networks that stretch across large regions. Moody Radio was the first example, and still one of the largest, though most of its stations broadcast stand-alone programming as well as network feeds. Z88.3 in Orlando, Florida, the WAY-FM Network, K-LOVE, Air 1, The Joy FM, Reach Radio, 3ABN Radio, Radio 74, and the Bible Broadcasting Network are other notable examples in the world.

Christian radio expanded in the early twenty-first century. It became available in the United Kingdom with changes to broadcasting regulations. Premier Christian Radio is based in the London area where it is available on medium wave and DAB; elsewhere, it is available digitally or by Internet. United Christian Broadcasters is an international broadcasting and media company; radio stations are based in Albania, Australia, Canada, Denmark, New Zealand, the Philippines and the United Kingdom. 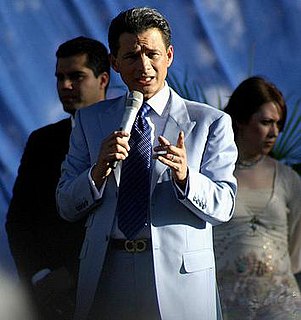 Televangelism is the use of media, specifically radio and television, to communicate Christianity. Televangelists are ministers, whether official or self-proclaimed, who devote a large portion of their ministry to television broadcasting. Some televangelists are also regular pastors or ministers in their own places of worship, but the majority of their followers come from TV and radio audiences. Others do not have a conventional congregation, and work primarily through television. The term is also used derisively by critics as an insinuation of aggrandizement by such ministers.

National Religious Broadcasters (NRB) is a non-partisan, international association of Christian communicators. While theologically diverse within the evangelical community, NRB members are linked through a Declaration of Unity that proclaims their joint commitment and devotion to Christianity.

Salem Radio Network is a United States-based radio network that specializes in syndicated Christian political talk, music, and right wing secular news/talk programming. It is a division of the Salem Media Group.

Educational Media Foundation is an American nonprofit organization that operates radio networks broadcasting contemporary Christian music, including Air1 and K-Love. EMF is based in Rocklin, California, a suburb of Sacramento. As of 2018, EMF directly owns and operates at least 415 radio stations throughout the United States. The programming for Air1 and K-Love is distributed by satellite and carried on its own stations, including many low-power FM translators and some stations which it operates on behalf of other owners.

Religious broadcasting refers to the dissemination of television and/or radio content that intentionally has religious ideas, religious experience, or religious practice as its core focus. In some countries, religious broadcasting developed primarily within the context of public service provision, whilst in others, it has been driven more by religious organisations themselves. Across Europe and in the US and Canada, religious broadcasting began in the earliest days of radio, usually with the transmission of religious worship, preaching or 'talks'. Over time, formats evolved to include a broad range of styles and approaches, including radio and television drama, documentary, and chat show formats, as well as more traditional devotional content. Today, many religious organizations record sermons and lectures, and have moved into distributing content on their own web-based IP channels.

VisionTV is a Canadian English language Category A specialty channel that broadcasts multi-faith, multicultural, and general entertainment programming aimed at the 45 and over demographic.

A radio format or programming format describes the overall content broadcast on a radio station. In countries where radio spectrum use is legally regulated, formats may have a legal status where stations are licensed to transmit only specific formats.

WJIV is a commercial American Christian radio station licensed to Cherry Valley, New York. The signal coverage area includes the Capital District of Albany, the Mohawk Valley, Oneonta, and Utica/Rome. The transmitter tower is located about 3 miles (5 km) east of Cherry Valley village. The format of the station includes Christian talk and ministry programs, along with Southern gospel music.

WNYM is an AM radio station licensed to Hackensack, New Jersey and serving the New York metropolitan area. The station is owned by Salem Media Group and programs a conservative talk radio format. Its studios are shared with co-owned WMCA in Lower Manhattan, and the transmitter is located in Hackensack.

WAWZ is a contemporary Christian music radio station located in Zarephath, New Jersey. It is a listener supported/commercial radio station owned by the Pillar of Fire International. The station's target demographic is 25- to 54-year-olds. The Class B, 28,000-watt signal based in Bridgewater, New Jersey serves the New York City market along with northern and central New Jersey.

WRTH is a classic hits radio station broadcasting as "103-3/95-9 Earth FM WRTH" and located in Greenville/Spartanburg, South Carolina. The station is licensed by the Federal Communications Commission (FCC) to the town of Greer and broadcasts on 103.3 FM with an effective radiated power (ERP) of 2,700 watts.

The Gospel Broadcasting Network(GBN) is an American Christian satellite broadcast network, which broadcasts 24 hours a day, seven days a week.

WCGB is a radio station broadcasting a Religious format as part of The Rock Radio Network. Licensed to Juana Diaz, Puerto Rico, it serves the Puerto Rico area. The station is currently owned by Calvary Evangelistic Mission, Inc. and features programming from Salem Radio Network.

KYTT is a Christian radio station licensed to Coos Bay, Oregon. The station is owned by Lighthouse Radio Group.

The Rock Radio Network is a 3-station AM radio network out of San Juan, Puerto Rico. It broadcasts Christian biblical teaching in a bilingual format. The Rock consists of the stations WBMJ in San Juan, WIVV in Vieques, and WCGB in Juana Díaz, Puerto Rico. The Rock is owned and operated by Calvary Evangelistic Mission, Inc.

KLYT is a radio station broadcasting a Christian Contemporary format. Licensed to Albuquerque, New Mexico, United States, the station serves the New Mexico area. The station is currently owned by Calvary Chapel of Albuquerque, Inc. The station is branded as "Star 88" and promotes itself as "Vertical Worship * Christian Hits * Fresh Indie". The station is heard via its main transmitter atop Sandia Peak, throughout New Mexico and portions of southern Colorado through a network of about 10 translators, and around the world via Internet streaming.