Last updated October 13, 2022
United States Army decoration
This article is about the US Army military award. For the Australian one, see Infantry Combat Badge.
Award

The CIB and its non-combat contemporary, the Expert Infantryman Badge (EIB), were created in November 1943 during World War II to boost morale and increase the prestige of service in the Infantry. Specifically, it recognizes the inherent sacrifices of all infantrymen, and that they face a greater risk of being wounded or killed in action than any other military occupational specialties. [5]

After the United States' declaration of war in 1941, the War Department had difficulty in recruiting soldiers into the Infantry branch in the case when men were given the opportunity to choose their branch of assignment, and the morale of soldiers in the Infantry Branch remained low, namely due to the fact that "[o]f all Soldiers [sic], it was recognized that the infantryman continuously operated under the worst conditions and performed a mission that was not assigned to any other Soldier [sic] or unit...[t]he infantry, a small portion of the total Armed Forces, was suffering the most casualties while receiving the least public recognition." [5] Lt. Gen. Lesley J. McNair, commanding officer of the U.S. Army Ground Forces, championed the idea of creating an award recognizing the unique dangers faced by infantrymen. [6]

The present war has demonstrated the importance of highly-proficient, tough, hard, and aggressive infantry, which can be obtained only by developing a high degree of individual all-around proficiency on the part of every infantryman. As a means of attaining the high standards desired and to foster esprit de corps in infantry units; the Expert Infantryman and the Combat Infantryman badges are established for infantry personnel.

Moreover, War Department Circular 269 stipulated: "... only one of these badges will be worn at one time" and "the Combat Infantryman badge is the highest award"; the awarding of the CIB was officially authorized with an executive order dated 15 November 1943; later, on 30 June 1944, the U.S. Congress approved an extra ten dollars in monthly pay to every infantryman awarded the CIB—excepting commissioned officers. The World War II regulations did not formally prescribe a specific combat service period establishing the infantryman's eligibility for being awarded a Combat Infantryman Badge, thus, in 1947, the U.S. government implemented a policy authorizing the retroactive awarding of the Bronze Star Medal to World War II veteran soldiers who had been awarded the Combat Infantryman Badge, because the CIB was awarded only to soldiers who had borne combat duties befitting the recognition conferred by a Bronze Star Medal. Both awards required a commander's recommendation and a citation in the pertinent orders. General Marshall initiated this after Medal of Honor–recipient Major Charles W. Davis noted to him that: "It would be wonderful, if someone could design a badge for every infantryman who faces the enemy, every day and every night, with so little recognition". [7]

From the beginning, Army leaders have taken care to retain the badge for the unique purpose for which it was established and to prevent the adoption of any other badge that would lower its prestige. At the close of World War II, the largest war in which armor and artillery played key roles in the ground campaigns, a review was conducted of the CIB criteria with consideration being given to creating either additional badges or authorizing the badge to cavalry and armor units. The review noted that any change in policy would detract from the prestige of the badge. [8]

A soldier must meet the following requirements to be awarded the Combat Infantryman Badge:

The original, World War II–model CIB was a silver and enamel badge, consisting of a 3-inch-wide (76 mm) rectangular bar with an infantry-blue field upon which is superimposed a Springfield Arsenal Musket, Model 1795. The composite device is superimposed to an elliptic oak-leaf wreath, symbolizing steadfast character, strength, and loyalty. During World War II, there existed metallic, composite models of the CIB composed of a separate EIB rectangle-badge and oak-leaf wreath that then was pinned to the blouse, as a Combat Infantryman Badge. Later, a matte-black subdued metal badge was created for wearing on the fatigues in the field. Since World War II, the CIB has been made in cloth (colored and subdued) for wear, like the matte-metal model, on the fatigue field uniform, and, a miniature (1.25 inches long) lacquered-metal CIB model is available for wearing on the mess dress uniform and civilian clothes.

On 8 February 1952, the Army approved the addition of stars to the CIB indicating the soldier's having fought in more than one war. The first was the second-award CIB recognizing Korean War combat operations; in that time, the U.S. Army's Institute of Heraldry also had created eighth-award CIB designs. The second- through fourth-award CIB awards were indicated with silver five-point stars, one to three stars centered, at badge's top, between the tips of the oak-leaf wreath; the fifth- through eighth-awards of the CIB were indicated with gold stars. However, Army Regulation 600-8-22 (Military Awards) only authorizes up to three awards of the CIB. There are four periods for which an award of the badge can be made:

Currently, the Combat Infantryman Badge is worn one-quarter (0.25") inch above the service ribbons above the left-breast pocket of the Class-A uniform coat and of the other uniforms with which the CIB is authorized. As of June 2011, the badge and its sew-on equivalent may be worn on the Army Combat Uniform (ACU). [12]

The National Infantry Museum has a memorial to the soldiers who have been awarded three CIBs in the course of their Army careers.

Major General David E. Grange Jr. was the Commanding General at Fort Benning, Georgia, between 1979 and 1981. As a triple CIB recipient himself, Grange understood that being awarded three Combat Infantryman Badges was a very rare achievement and thought a list should be compiled to celebrate the recipients' distinction. With his urging, the National Infantry Museum at Fort Benning began collecting names of known third CIB recipients. By 1983 the museum had collected and set to bronze the names of two hundred and thirty men and preparations were made for the unveiling of a memorial to these soldiers and the recipients yet to be discovered at Fort Benning. An additional 94 names were added to the bronze plaques over the years. After the inauguration of the new NIM, a new exhibit showing the list was displayed.

Because the gap between the second (Korean War) and fourth (War on Terror) periods of eligibility is more than forty-eight years, longer than any likely career in infantry or special forces units, all known three-time recipients served in World War II and the Korean and Vietnam Wars.

Infantry is a military specialization which engages in ground combat on foot. Infantry generally consists of light infantry, mountain infantry, motorized & mechanized infantry, airborne infantry, and naval infantry or marines. Although disused in modern times, heavy infantry also commonly made up the bulk of many historic armies. Infantry, cavalry, and artillery have traditionally made up the core of the combat arms professions of various armies, with the infantry almost always comprising the largest portion of these forces. 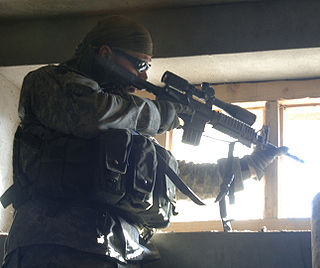 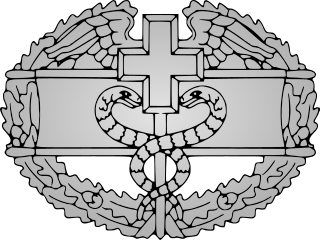 The Combat Medical Badge is an award of the United States Army which was first created in January 1945. Any member of the Army Medical Department, at the rank of colonel or below, who is assigned or attached to a ground combat arms unit of brigade or smaller size which provides medical support during any period in which the unit was engaged in ground combat is eligible for the CMB. According to the award criterion, the individual must be performing medical duties while simultaneously being engaged by the enemy; strict adherence to this requirement and its interpretation will vary by unit. As of 3 June 2005, Special Forces medics are no longer eligible for award, but may now receive the Combat Infantryman Badge. A revision has allowed aviation medics to be eligible for the CMB. The non-combat proficiency equivalent is the Expert Field Medical Badge. 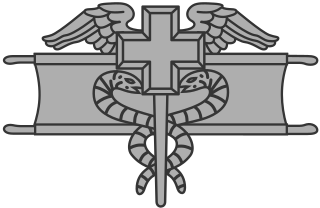 The Expert Field Medical Badge (EFMB) is a United States Army special skills badge first created on June 18, 1965. This badge is the non-combat equivalent of the Combat Medical Badge (CMB) and is awarded to U.S. military personnel and North Atlantic Treaty Organization (NATO) military personnel who successfully complete a set of qualification tests, including both written and performance portions. The EFMB is known for its adherence to its testing standards and, as such, requires strict attention to detail from candidates in order to receive a "GO" on its combat testing lanes. The pass rate for FY 2017 was 7%, making the EFMB one of the most difficult and prestigious Army special skill badges to earn.

The 9th Infantry Regiment ("Manchu") is a parent infantry regiment of the United States Army. 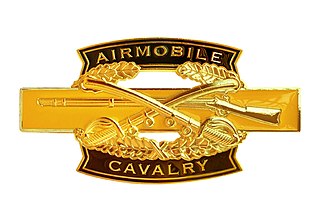 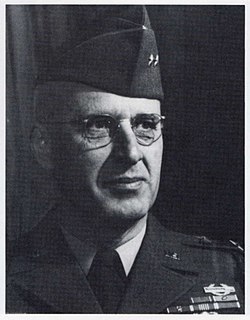 General Guy Stanley Meloy Jr. was a U.S. Army general, World War II and Korean War veteran, and served as commander of all U.S. forces in Korea during the Cold War. 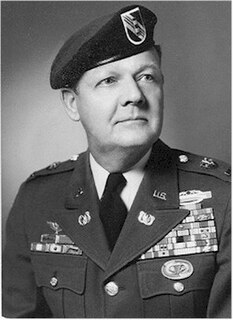 Leo J. Meyer was a soldier in the United States Army, one of only three hundred and twenty-four men who have been awarded three Combat Infantryman Badges out of more than the twenty-three million men who served in the US Army between December 1941 and December 2007. Colonel Meyer was inducted into the U.S. Army Officer Candidate School Hall of Fame in 2009.

The Infantry Combat Badge (ICB) is awarded to serving members of the Australian Army for service as an Infantryman in warlike operations. 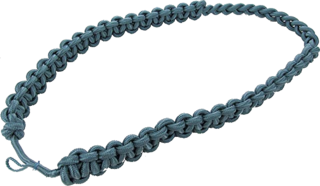 The infantry blue cord is a United States military decoration worn over the right shoulder of all infantry-qualified U.S. Army soldiers. It is a fourragere in light blue, specifically PMS 5415, worn under the right shoulder and under the right epaulette of a U.S. Army infantry soldier's Class A dress blue uniform jacket or Class B shirt. The cord is composed of a series of alternating left and right half knots that are tied around a leader cord to form a "Solomon bar".

68W is the Military Occupational Specialty (MOS) for the United States Army's Combat Medic. 68Ws are primarily responsible for providing emergency medical treatment at point of wounding on the battlefield, limited primary care, and health protection and evacuation from a point of injury or illness. 68W's hold the license of EMT-B through the NREMT, and often serve the role similar to an EMT-B or Medical Assistant. However, 68Ws often have a scope of practice much wider than EMT-B's and Medical Assistants. This specialty is open to males and females with minimum line scores of 107 GT and 101 ST on the Armed Services Vocational Aptitude Battery (ASVAB).