Crash Dive is a World War II film in Technicolor released in 1943. It was directed by Archie Mayo, written by Jo Swerling and W.R. Burnett, and starred Tyrone Power, Dana Andrews and Anne Baxter. The film was the last for Power, already enlisted in the United States Marine Corps, before assignment to recruit training.

US Navy submarine USS Corsair, operating in the North Atlantic, hunts out German merchant raiders preying on Allied shipping. Its new executive officer, Lt. Ward Stewart (Tyrone Power), has been transferred to submarines after commanding his own PT boat. At the submarine base in New London, Connecticut, he asks his new captain, Lieutenant Commander Dewey Connors (Dana Andrews), for a weekend leave to settle his affairs before taking up his new assignment. On a train bound for Washington D.C., Stewart accidentally encounters New London school teacher Jean Hewlett (Anne Baxter) and her students. Despite her initial resistance to his efforts, he charms her and they fall in love.

His infatuation with PT boats irritates Connors but the two become friends after engaging a Q ship in which Connors is injured and Stewart sinks it. Connors, unbeknownst to Stewart, is already in love with Jean but delays marrying her until he gains a promotion to commander, and the commensurate pay raise it provides, so he can properly support her. Tension between the men ensues when Connors discovers that the woman Stewart is wooing is Jean. The film culminates in a commando raid by Corsair on an island supply base for the German raiders. After the raid, the two men make peace, and after the Corsair's return to New London, Stewart and Jean are married. [2]

Part of the movie was filmed at Submarine Base New London, Connecticut. A few naval combatants rarely seen in Technicolor are visible in the early part of the film. The PT boats seen near the beginning are the 77-foot Elco type. The submarine primarily featured as Corsair was the experimental USS Marlin, with a conning tower modified to resemble her sister USS Mackerel. A few O-class and R-class submarines, built in World War I and used for training in World War II, are visible in the background of some shots. For wartime security reasons, no submarine classes used in combat in World War II appear in the film. USS Semmes is seen in one shot; there are probably not many good Technicolor views of a four-stack destroyer available today. Semmes was being used as a sonar testbed at the time.

One of the scenes in the movie was similar to that in the film Destination Tokyo (1943) starring Cary Grant, where the submarines follow an enemy tanker into their naval base through a minefield. Another similar plot theme was in the 1954 movie Hell and High Water about an island base to be used to launch a Boeing B-29 Superfortress in U.S. markings for an atomic bomb attack.

One interesting feature of the film is the significant role of African-American actor Ben Carter as messman Oliver Cromwell Jones. While most World War II movies (particularly those made during the war) feature few, if any, African-American characters, Crash Dive is a notable exception. Although Carter plays a stereotypical role as a low ranking sailor, his character is more developed than most African-American characters of the time by being shown to be a confidant to a higher ranking crewmember. Jones (Ben Carter) also participates in a commando raid late in the film. A scene which subtly comments on the racial mores of the time depicts the white sailors blackening their faces in preparation for that nighttime raid. Upon walking in and seeing them Jones laughs then reports loudly "I'm the only born commando here!". 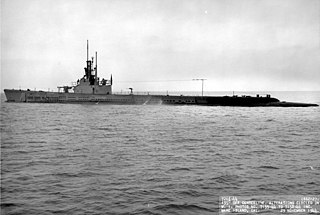 The Gato class of submarines was built for the United States Navy and launched in 1941–1943; they were the first mass-production U.S. submarine class of World War II. Together with their near-sisters the Balao and Tench classes, their design formed the majority of the United States Navy's World War II submarine fleet. Named after the lead ship of the class, USS Gato, the Gatos and their successors formed the core of the submarine service that was largely responsible for the destruction of the Japanese merchant marine and a large portion of the Imperial Japanese Navy in World War II. Gato's name comes from a species of small catshark. Like most other U.S. Navy submarines of the period, boats of the Gato class were given the names of marine creatures. In some references, the Gatos are combined with their successors, especially the Balao class.

The St Nazaire Raid or Operation Chariot was a British amphibious attack on the heavily defended Normandie dry dock at St Nazaire in German-occupied France during the Second World War. The operation was undertaken by the Royal Navy and British Commandos under the auspices of Combined Operations Headquarters on 28 March 1942. St Nazaire was targeted because the loss of its dry dock would force any large German warship in need of repairs, such as Tirpitz, sister ship of Bismarck, to return to home waters by running the gauntlet of the Home Fleet of the Royal Navy and other British forces, via the English Channel or the GIUK gap.

USS Mackerel (SS-204), the lead ship of her class of submarines, was the first ship of the United States Navy named for the mackerel. Mackerel and her near-sister Marlin were prototype small submarines which the Navy was exploring to replace the aging S-class submarines. 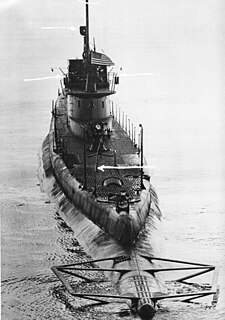 USS Marlin (SS-205), a Mackerel-class submarine, was the first ship of the United States Navy to be named for the marlin, a large game fish. Marlin and her near-sister Mackerel were prototype small submarines, which the Navy was exploring to replace the aging S-class submarines. References differ as to whether Marlin had a direct drive propulsion system or diesel-electric drive. 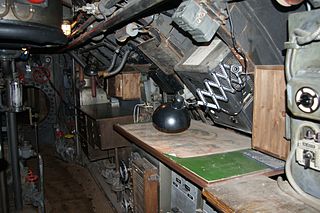 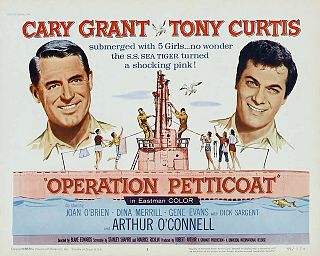 Two ships of the United States Navy have been named USS Corsair, for the California rockfish, or a pirate or privateer, especially Turkish or Saracen. 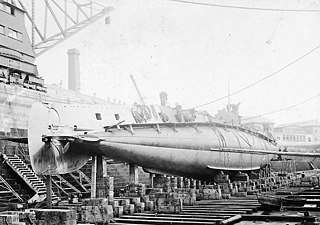 The United States Navy's sixteen O-class submarines were created out of the lessons learned from the L class. The O class were about 80 tons larger than the L class, with greater power and endurance for ocean patrols. Due to the American entry into World War I the O class were built much more rapidly than previous classes, and were all commissioned in 1918. O-1 through O-10 were group 1, designed by Electric Boat, O-11 through O-16 were group 2, designed by the Lake Torpedo Boat Company and sometimes considered a separate class. The group 2 boats entered service just before the end of World War I. Eight of the group 1 boats survived to serve in World War II as training boats when they were recommissioned in 1941. 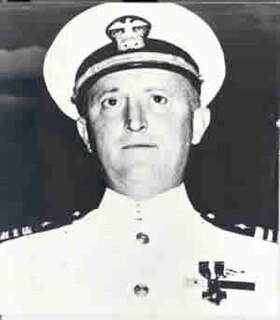 Howard Walter Gilmore was a submarine commander in the United States Navy who received the Medal of Honor posthumously for his heroic self-sacrifice during World War II. 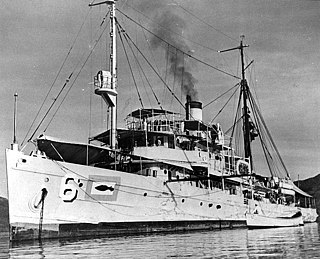 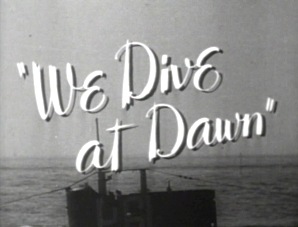 We Dive at Dawn is a 1943 war film directed by Anthony Asquith and starring John Mills and Eric Portman as Royal Navy submariners in the Second World War. It was written by Val Valentine and J. B. Williams with uncredited assistance from Frank Launder. It was produced by Edward Black. The film's sets were designed by Walter Murton.

Raid on Rommel is an American B movie in Technicolor from 1971, directed by Henry Hathaway and set in North Africa during the Second World War. It stars Richard Burton as a British commando attempting to destroy German gun emplacements in Tobruk. Much of the action footage was reused from the 1967 film Tobruk, and the storyline is also largely the same.

Operation Anglo was a British Commando raid on the island of Rhodes during the Second World War. The raid was carried out by eight men of the Special Boat Section (SBS) assisted by four Greeks.

Ro-101 was an Imperial Japanese Navy Ro-100-class submarine. Completed and commissioned in October 1942, she served in World War II and operated in the Solomon Islands and the New Guinea area until she was sunk in September 1943 during her eighth war patrol.