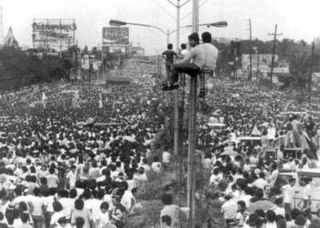 The People Power Revolution, also known as the EDSA Revolution or the February Revolution, was a series of popular demonstrations in the Philippines, mostly in Metro Manila, from February 22–25, 1986. There was a sustained campaign of civil resistance against regime violence and electoral fraud. The nonviolent revolution led to the departure of Ferdinand Marcos, the end of his 20-year dictatorship and the restoration of democracy in the Philippines.

The 1982 Kenyan coup d'état attempt was a failed attempt to overthrow President Daniel arap Moi's government. At 3 A.M. on Sunday, 1 August 1982, a group of soldiers from the Kenya Air Force took over Eastleigh Air Base just outside Nairobi, and by 4 A.M. the nearby Embakasi air base had also fallen. At 6 A.M. Senior Private Hezekiah Ochuka and Sergeant Pancras Oteyo Okumu captured the Voice of Kenya radio station in central Nairobi, from where they then broadcast in English and Swahili that the military had overthrown the government. Working at the behest of Ochuka, Corporal Bramwel Injeni Njereman was leading a plot to bomb the State House and the General Service Unit headquarters from the Laikipia Air Base, Nanyuki. Corporal Njereman forced three pilots to fly two F-5E Tiger jets and a Strikemaster that would be used for the mission. However, Major Mutua was aware that Corporal Njereman had never flown a jet fighter before and would likely not be able to cope with the g-forces. The pilots, while communicating on a secret channel, agreed to execute daring manoeuvres to disorient their captor. The trick worked. The pilots dumped the bombs in Mt. Kenya forest and headed back to Nanyuki.

A failed putsch dubbed The Oakwood Mutiny occurred in the Philippines on July 27, 2003. A group of 321 armed defectors from the Armed Forces of the Philippines and Philippine National Police, calling themselves the "Bagong Katipuneros" (Filipino: New Katipuneros) led by Philippine Army CaptainGerardo Gambala and Philippine Navy Lieutenant Senior GradeAntonio Trillanes IV forcibly occupied the Oakwood Premier serviced apartments in Glorietta, Makati. Their public statements, as covered by the Philippine news media, charged allegations of corruption committed by the Gloria Macapagal Arroyo administration. They also claimed signs suggesting that the President was going to declare martial law. The rebel group was named "Magdalo" by the newspapers, in a reference to the insignia which the insurgents adopted. The insignia alluded to was a Katipunan flag perceived as similar to that of the breakaway Magdalo faction during the Spanish-era Philippine Revolution.

DZME is a radio station owned and operated by Capitol Broadcasting Center in the Philippines. The station's studio is located at Unit 1802, 18/F, OMM-Citra Building, San Miguel Avenue, Ortigas Center, Pasig, and its transmitter is located at #78 Flamengco St., Brgy. Panghulo, Obando, Bulacan. This station operates Weekdays from 4:00 AM to 12:00 MN, Saturdays from 5:00 AM to 12:00 MN, and Sundays from 5:00 AM to 11:00 PM.

From 1986 to 1987, there were six plots to overthrow Philippine President Corazon Aquino involving various members of the Armed Forces of the Philippines. A significant number of the military participants in these attempts belonged to the Reform the Armed Forces Movement (RAM), while others were identified loyalists of former President Ferdinand Marcos, who had been deposed in the People Power Revolution in late February 1986.

The most serious attempted coup d'état against the government of Philippine President Corazon Aquino was staged beginning December 1, 1989, by members of the Armed Forces of the Philippines belonging to the Reform the Armed Forces Movement (RAM) and soldiers loyal to former President Ferdinand Marcos. Metro Manila was shaken by this Christmastime coup, which almost seized the presidential palace. It was completely defeated by the Philippine government by December 9, 1989. 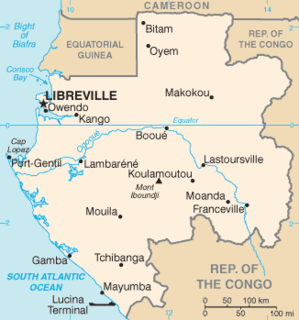 The 1964 Gabonese coup d'état was staged between 17 and 18 February 1964 by Gabonese military officers who rose against Gabonese President Léon M'ba. Before the coup, Gabon was seen as one of the most politically stable countries in Africa. The coup resulted from M'ba's dissolution of the Gabonese legislature on 21 January 1964, and during a takeover with few casualties 150 coup plotters arrested M'ba and a number of his government officials. Through Radio Libreville, they asked the people of Gabon to remain calm and assured them that the country's pro-France foreign policy would remain unchanged. A provisional government was formed, and the coup's leaders installed Deputy Jean-Hilaire Aubame, who was M'ba's primary political opponent and had been uninvolved in the coup, as president. Meanwhile, M'ba was sent to Lambaréné, 250 kilometres (155 mi) from Libreville. There was no major uprising or reaction by the Gabonese people when they received word of the coup, which the military interpreted as a sign of approval.

The Presidency of Corazon Aquino began following the triumph of the peaceful People Power Revolution when Corazon Aquino became President of the Philippines, and spanned a six-year period from February 25, 1986, to June 30, 1992.

On February 19, 1965, some units of the Army of the Republic of Vietnam commanded by General Lâm Văn Phát and Colonel Phạm Ngọc Thảo launched a coup against General Nguyễn Khánh, the head of South Vietnam's ruling military junta. Their aim was to install General Trần Thiện Khiêm, a Khánh rival who had been sent to Washington D.C. as Ambassador to the United States to prevent him from seizing power. The attempted coup reached a stalemate, and although the trio did not take power, a group of officers led by General Nguyễn Chánh Thi and Air Marshal Nguyễn Cao Kỳ, and hostile to both the plot and to Khánh himself, were able to force a leadership change and take control themselves with the support of American officials, who had lost confidence in Khánh.

The 1966 Nigerian coup d'état began on 15 January 1966, when mutinous Nigerian soldiers led by Chukwuma Kaduna Nzeogwu and Emmanuel Ifeajuna killed 22 people including the Prime Minister of Nigeria, many senior politicians, many senior Army officers, and sentinels on protective duty. The coup plotters attacked the cities of Kaduna, Ibadan, and Lagos while also blockading the Niger and Benue River within a two-day span of time before the coup plotters were subdued. The General Officer Commanding the Nigerian Army, Johnson Aguiyi-Ironsi, was compelled to take control of the government of a country in upheaval, inadvertently putting Nigeria's nascent democracy on hold. His ascendancy to power was deemed a conspiracy by the coup plotters, who were mainly Igbo officers, to pave the way for General Aguiyi-Ironsi to be Head of State of Nigeria. Consequently, the retaliatory events by Northern members of the Nigerian Army that led to deaths of many innocent Igbo soldiers and civilians caused the Nigerian Civil War.

The 2014 Gambian coup d'état attempt broke out during the night of 30 December 2014, when gunfire erupted in the Gambian capital of Banjul. 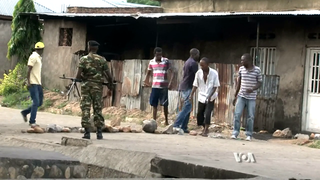 The 1961 revolt in Somalia was an unsuccessful revolt and coup d'état attempt in northern Somalia which took place in December 1961. The coup plotters, a group of northern junior officers, intended to restore the independence of the State of Somaliland.