De Grootste Nederlander ('The Greatest Dutchman') was a public poll held in 2004 by the broadcasting company KRO of the Publieke Omroep. The series has the BBC's 100 Greatest Britons TV format. During the series, it included individual programmes on the top ten, with viewers having further opportunities to vote after each programme.

The recently assassinated politician Pim Fortuyn was announced as the winner in a live television broadcast on 15 November 2004, two weeks after Theo van Gogh was murdered. This was controversial, and was said to be an "embarrassing" choice by several journalists and historians. [1] Later it became revealed that William of Orange had received the most votes in total, but only the votes that were tallied before the end of the live programme counted (the number of calls was so large that not all could be counted before the end of the show). And thus Fortuyn remained the official number one according to the rules, as announced originally.

Willem is a Dutch and West Frisian masculine given name. The name is Germanic, and can be seen as the Dutch equivalent of the name William in English, Guillaume in French, Guilherme in Portuguese, Guillermo in Spanish and Wilhelm in German. Nicknames that are derived from Willem are Jelle, Pim, Willie, Willy and Wim.

Gerrit is a Dutch male name meaning "brave with the spear", the Dutch and Frisian form of Gerard. People with this name include:

Van Leeuwen is a Dutch toponymic surname meaning "from Leeuwen". In 2007, nearly 28,000 people in the Netherlands carried the name, making it the 18th most common name there. There are two places named Leeuwen in Gelderland and two in Limburg. Considering the frequency of the name and the small size of these places, it has been speculated that people from the city of Leuven may have come to be called "van Leeuwen" as well. Although translated as "lions" in modern Dutch, the place name may be explained originating from Germanic hlaiw, meaning (burial) mound. The name appeared in records since the 13th-century in South Holland. People with this surname include:

The Dutch male given name Hendrik is a cognate of the English Henry. The spelling Hendrick was interchangeable until the 19th century. Birth names of people with this name can be Latinized to Henderikus, Hendricus, Hendrikus, or Henricus, while common nicknames for Hendrik are Han, Hein, Henk, Hennie, Henny, Henri, Henry, Rijk, and Rik. People with Hendrik or Hendrick as their first name include:

Zorgvlied is a cemetery on the Amsteldijk in Amsterdam, the Netherlands, on the left bank of the river Amstel. The cemetery was opened in 1870 by the city of Amstelveen which still owns and operates it, though since 1896 it is located within the boundaries of the city of Amsterdam. One of the country's best-known cemeteries, it is notable for the large number of celebrities, especially from the literary and theater worlds, buried there. 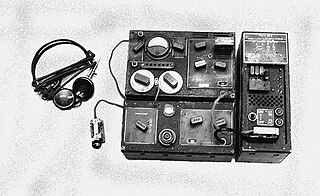 The Bureau Bijzondere Opdrachten was a Dutch secret service during World War II. The BBO dispatched secret agents to the German-occupied Netherlands, where they supported the local resistance and carried out sabotage activities.

Oud Eik en Duinen is a cemetery in The Hague, the Netherlands, formerly called Eik en Duinen and also nicknamed "the Dutch Père-Lachaise". The cemetery is built around a chapel constructed around 1247 by William II of Holland in honor of his father, Floris IV, Count of Holland. This chapel was partially demolished in 1581, and in the 17th century the area was again used as a cemetery. When Eik en Duinen was full, a new cemetery, Nieuw Eykenduynen, was constructed in 1891 across the road, and since then the old cemetery is known as "Old" Eik en Duinen.

Events in the year 1945 in the Netherlands.