In a free market the rivalry between competing companies naturally tends to preclude combined action for the advancement of common interests. [1] The emergence of trade unions and their efforts to establish collective bargaining agreements on a local or an industry-wide level ultimately paved the way for combined action by competitors employing such labor in common. [1]

The collective entities established by commercial enterprises acting in concert on such matters are known variously as employers' organizations or employers' associations.

Historically, employers' associations were of two general types: those consisting only of employers in a single trade or industry, or those bringing together employers from across a broad spectrum of industries on a local, regional, or national basis. [1]

As was the case for unions, the first employers' organizations emerged in large industrial cities during the first half of the 19th century. [2] Both unions and employers' organizations tended to be localized. [2] As unions began to proliferate and to gain strength in negotiations over wages and conditions through the use of strike actions, employers began to unite in order to restrict wage rates and otherwise fetter the emerging organized labor movement. [2]

In countries with a social market economy, such as Austria, Sweden and the Netherlands, the employers' organizations are part of a system of institutionalized deliberation, together with government and the trade unions. In tri-partite bargaining the so-called social partners strike agreements on issues like price levels, wage increases, tax rates and pension entitlements. In these countries collective bargaining is often done on a national level not between one corporation and one union, but national employers' organizations and national trade unions.

In countries like Switzerland, the negotiations often take place at the cantonal level, branch by branch. The state is not involved in these negotiations, but can step in if the employers and the trade unions don't reach an agreement in a sector where salary dumping exists.

A trade union, often simply called a union, is an organization of workers who have come together to achieve many common goals, such as protecting the integrity of their trade, improving safety standards, and attaining better wages, benefits, and working conditions through the increased bargaining power wielded by solidarity among workers. Trade unions typically fund the formal organization, head office, and legal team functions of the trade union through regular fees or union dues. The delegate staff of the trade union representation in the workforce are made up of workplace volunteers who are appointed by members in democratic elections.

Labour law mediates the relationship between workers, employing entities, trade unions and the government. Collective labour law relates to the tripartite relationship between employee, employer and union. Individual labour law concerns employees' rights at work also through the contract for work. Employment standards are social norms for the minimum socially acceptable conditions under which employees or contractors are allowed to work. Government agencies enforce labour law. 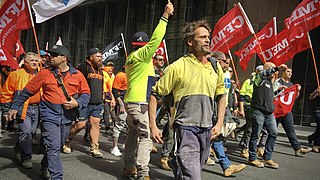 Employment is a relationship between two parties, usually based on a contract where work is paid for, where one party, which may be a corporation, for profit, not-for-profit organization, co-operative or other entity is the employer and the other is the employee. Employees work in return for payment, which may be in the form of an hourly wage, by piecework or an annual salary, depending on the type of work an employee does or which sector they are working in. Employees in some fields or sectors may receive gratuities, bonus payment or stock options. In some types of employment, employees may receive benefits in addition to payment. Benefits can include health insurance, housing, disability insurance or use of a gym. Employment is typically governed by employment laws, organisation or legal contracts.

A union security agreement is a contractual agreement, usually part of a union collective bargaining agreement, in which an employer and a trade or labor union agree on the extent to which the union may compel employees to join the union, and/or whether the employer will collect dues, fees, and assessments on behalf of the union.

Finnish national income policy agreements or comprehensive income policy agreements are tripartite agreements between Finnish trade unions, employers' organizations, and the Finnish government. They are policy documents covering a wide range of economic and political issues, such as salaries, taxation, pensions, unemployment benefits, and housing costs. They represent collective bargaining taken to its logical maximum, reaching virtually all wage-earners. Their enforcement is made easier by the universal validity of collective labour agreements. However, they are voluntary agreements and are not considered government legislation, i.e. they do not represent central planning of the economy.

United States labor law sets the rights and duties for employees, labor unions, and employers in the United States. Labor law's basic aim is to remedy the "inequality of bargaining power" between employees and employers, especially employers "organized in the corporate or other forms of ownership association". Over the 20th century, federal law created minimum social and economic rights, and encouraged state laws to go beyond the minimum to favor employees. The Fair Labor Standards Act of 1938 requires a federal minimum wage, currently $7.25 but higher in 28 states, and discourages working weeks over 40 hours through time-and-a-half overtime pay. There is no federal law requiring paid holidays or paid family leave, and limited state laws. The Family and Medical Leave Act of 1993 creates a limited right to 12 weeks of unpaid leave in larger employers. There is no automatic right to an occupational pension beyond federally guaranteed social security, but the Employee Retirement Income Security Act of 1974 requires standards of prudent management and good governance if employers agree to provide pensions, health plans or other benefits. The Occupational Safety and Health Act of 1970 requires employees have a safe system of work.

The European Trade Union Confederation (ETUC) is the major trade union organisation representing workers at European level. European integration has reinforced the EU's role in economic, employment and social policy throughout the 28 Member States. The ETUC is a European social partner, which means that the European Commission consults it when developing social and economic policies. It also negotiates autonomous agreements and work programmes with European employers. And it coordinates the national and sectoral policies of its affiliates on social and economic matters, particularly in the framework of the EU institutional processes, including European economic governance and the EU Semester.

Social dialogue is the process whereby social partners negotiate, often in collaboration with the government, to influence the arrangement and development of work-related issues, labour market policies, social protection, taxation or other economic policies. It is a widespread procedure to develop public policies in Western Europe in particular.

The National Civic Federation (NCF) was an American economic organization founded in 1900 which brought together chosen representatives of big business and organized labor, as well as consumer advocates in an attempt to ameliorate labor disputes. It favored moderate progressive reform and sought to resolve disputes arising between industry and organized labor.

The European Metalworkers' Federation (EMF), founded in 1971, is a federation of 68 metalworkers' unions from 31 countries, representing a combined total of 6.5 million affiliates. It is based in Brussels, Belgium, the general secretary is Ulrich Eckelman and Bart Samyn is the Deputy General Secretary. The organisation was dissolved on 15 May 2012, to become a part - together with EMCEF and ETUF-TCL - of the newly created organisation industriAll European Trade Union on 16 May 2012 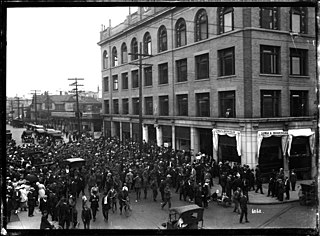 Labor relations is a field of study that can have different meanings depending on the context in which it is used. In an international context, it is a subfield of labor history that studies the human relations with regard to work – in its broadest sense – and how this connects to questions of social inequality. It explicitly encompasses unregulated, historical, and non-Western forms of labor. Here, labor relations define "for or with whom one works and under what rules. These rules determine the type of work, type and amount of remuneration, working hours, degrees of physical and psychological strain, as well as the degree of freedom and autonomy associated with the work."

A business union is a type of trade union that is opposed to class or revolutionary unionism and has the principle that unions should be run like businesses.

Israeli labor law provides a number of protections to workers in Israel. They are governed by the Basic Laws, the Hours of Work and Rest Law, as well as various other laws, statutes, and regulations.

Collective agreement coverage or union representation refers to the proportion of people in a country population whose terms and conditions at work are made by collective bargaining, between an employer and a trade union, rather than by individual contracts. This is invariably higher than the union membership rate, because collective agreements almost always protect non-members in a unionised workplace. This means that, rather than individuals who have weaker bargaining power representing themselves in negotiations, people organise to represent each other together when negotiating for better pay and conditions in their workplace. The number of people who are covered by collective agreements is higher than the number of union members, and in many cases substantially higher, because when trade unions make collective agreements they aim to cover everyone at work, even those who have not necessarily joined for membership.