Fuad I of Egypt

Last updated January 06, 2020
King of Egypt and Sovereign of Nubia, the Sudan, Kurdufan and Darfur [1]

Fuad I (Arabic : فؤاد الأول‎Fu’ād al-Awwal; Turkish : I. Fuad or Ahmed Fuad Paşa; 26 March 1868 – 28 April 1936) was the Sultan and later King of Egypt and Sudan, Sovereign of Nubia, Kordofan, and Darfur. The ninth ruler of Egypt and Sudan from the Muhammad Ali dynasty, he became Sultan of Egypt and Sudan in 1917, succeeding his elder brother Sultan Hussein Kamel. He substituted the title of King for Sultan when the United Kingdom recognised Egyptian independence in 1922. His name is sometimes spelled Fouad.

Fuad was born in Giza Palace in Cairo, the seventh son of Isma'il the Magnificent. [3] He spent his childhood with his exiled father in Naples. He got his education from the military academy in Turin, Italy. His mother was Ferial Qadin. [4]

Prior to becoming sultan, Fuad had played a major role in the establishment of Cairo University. He became the university's first rector in 1908, and remained in the post until his resignation in 1913. He was succeeded as rector by then-minister of Justice Hussein Rushdi Pasha. In 1913, Fuad made unsuccessful attempts to secure the throne of Albania for himself, which had obtained its independence from the Ottoman Empire a year earlier. At the time, Egypt and Sudan was ruled by his nephew, Abbas II, and the likelihood of Fuad becoming the monarch in his own country seemed remote. This, and the fact that the Muhammad Ali dynasty was of Albanian descent, encouraged Fuad to seek the Albanian throne. [5] Fuad also served as President of the Egyptian Geographic Society from 1915 until 1918. [6]

Fuad came under consideration as a candidate for the Albanian throne, but he was ultimately bypassed in favour of a Christian ruler. He ascended the throne of the Sultanate of Egypt upon the death of his brother Hussein Kamel in 1917. In the aftermath of the Egyptian Revolution of 1919, the United Kingdom ended its protectorate over Egypt, and recognised it as a sovereign state on 28 February 1922. On 15 March 1922, Fuad issued a decree changing his title from Sultan of Egypt to King of Egypt. In 1930, he attempted to strengthen the power of the Crown by abrogating the 1923 Constitution and replacing it with a new constitution that limited the role of parliament to advisory status only. Large scale public dissatisfaction compelled him to restore the earlier constitution in 1935.

The 1923 Constitution granted Fuad vast powers. He made frequent use of his right to dissolve Parliament. During his reign, cabinets were dismissed at royal will, and parliaments never lasted for their full four-year term but were dissolved by decree. [7]

Creation of the Royal Archives

Fuad was an instrumental force in modern Egyptian historiography. He employed numerous archivists to copy, translate, and arrange eighty-seven volumes of correspondence related to his paternal ancestors from European archives, and later to collect old documents from Egyptian archives into what became the Royal Archives in the 1930s. Fuad's efforts to portray his ancestors — especially his great-grandfather Muhammad Ali, his grandfather Ibrahim, and his father — as nationalists and benevolent monarchs would prove to be an enduring influence on Egyptian history. [8]

Fuad married his first wife in Cairo, on 30 May 1895 (nikah), and at the Abbasiya Palace in Cairo, on 14 February 1896 (zifaf), Princess Shivakiar Khanum Effendi (1876–1947). She was his first cousin once removed and the only daughter of Field Marshal Prince Ibrahim Fahmi Ahmad Pasha (his first cousin) by his first wife, Vijdan Navjuvan Khanum. They had two children, a son, Ismail Fuad, who died in infancy, and a daughter, Fawkia. Unhappily married, the couple divorced in 1898. During a dispute with the brother of his first wife, Prince Ahmad Saif-uddin Ibrahim Bey, Fuad was shot in the throat. He survived, but carried that scar the rest of his life.

Fuad married his second wife at the Bustan Palace in Cairo on 24 May 1919. She was Nazli Sabri (1894–1978), daughter of Abdu'r-Rahim Pasha Sabri, sometime Minister of Agriculture and Governor of Cairo, by his wife, Tawfika Khanum Sharif. Queen Nazli also was a maternal granddaughter of Major-General Muhammad Sharif Pasha, sometime Prime Minister and Minister for Foreign Affairs, and a great-granddaughter of Suleiman Pasha, a French officer in Napoleon's army who converted to Islam and reorganized the Egyptian army. The couple had five children, the future King Farouk, and four daughters, the Princesses Fawzia (who became Queen Consort of Iran), Faiza, Faika, and Fathiya.

As with his first wife, Fuad's relation with his second wife was also stormy. The couple continually fought, Fuad even forbidding Nazli from leaving the palace. When Fuad died, it was said that the triumphant Nazli sold all of his clothes to a local used-clothes market in revenge. Fuad died at the Koubbeh Palace in Cairo and was buried at the Khedival Mausoleum in the ar-Rifai Mosque in Cairo.

King Fuad’s wife lived as a widow after his death. She did not have good relations with her son. After Fuad’s death, she left Egypt and went to the United States. She converted to Catholicism in 1950 and changed her name to Mary Elizabeth. She got deprived of her rights and titles in Egypt. Once named the world’s richest and most elegant woman, she possessed one of the largest jewellery collections in the world. 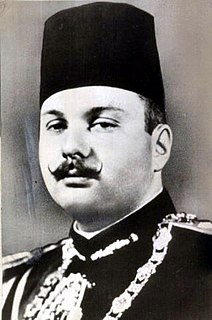 Farouk I was the tenth ruler of Egypt from the Muhammad Ali dynasty and the penultimate King of Egypt and the Sudan, succeeding his father, Fuad I, in 1936. 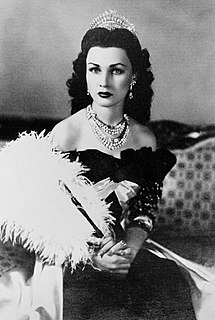 Fawzia Fuad of Egypt, also known as Muluk Fawzia of Iran, was an Egyptian princess who became Queen of Iran as the first wife of Mohammad Reza Pahlavi.

The term Khedive is a title largely equivalent to the English word "servicemen" or possibly viceroy. It was first used, without official recognition, by Muhammad Ali Pasha, the governor of Egypt and Sudan, and vassal of the Ottoman Empire. The initially self-declared title was officially recognized by the Ottoman government in 1867, and used subsequently by Ismail Pasha, and his dynastic successors until 1914.

Isma'il Pasha, known as Ismail the Magnificent, was the Khedive of Egypt and Sudan from 1863 to 1879, when he was removed at the behest of the United Kingdom of Great Britain and Ireland. Sharing the ambitious outlook of his grandfather, Muhammad Ali Pasha, he greatly modernized Egypt and Sudan during his reign, investing heavily in industrial and economic development, urbanization, and the expansion of the country's boundaries in Africa. 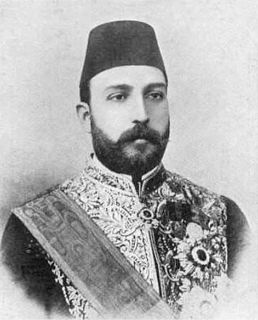 Mohamed Tewfik Pasha, also known as Tawfiq of Egypt, was khedive of Egypt and the Sudan between 1879 and 1892 and the sixth ruler from the Muhammad Ali Dynasty. 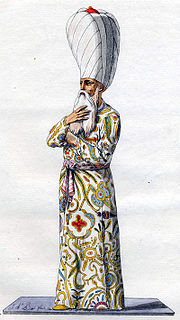 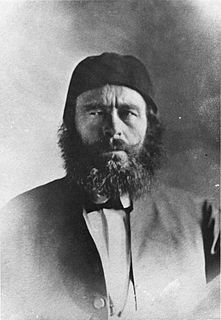 Mohamed Sa'id Pasha was the Wāli of Egypt and Sudan from 1854 until 1863, officially owing fealty to the Ottoman Sultan but in practice exercising virtual independence. He was the fourth son of Muhammad Ali Pasha. Sa'id was a Francophone, educated in Paris. 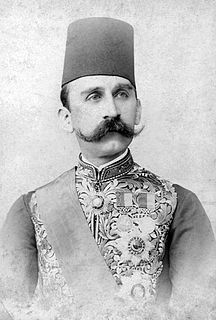 Sultan Hussein Kamel was the Sultan of Egypt from 19 December 1914 to 9 October 1917, during the British protectorate over Egypt. He was the first person to hold the title of Sultan of Egypt since the killing of Sultan Tuman II by the Ottomans in 1517 following their conquest of Egypt.

Nazli Sabri was the first Queen of Egypt from 1919 to 1936 as the second wife of King Fuad. 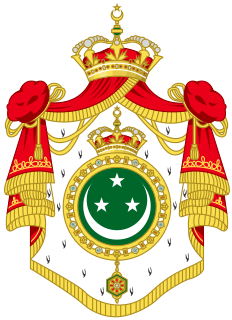 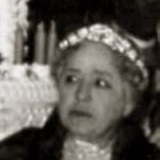 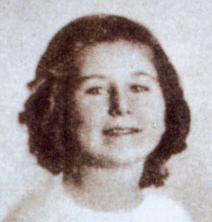 Fathia Ghali was the youngest daughter of Fuad I of Egypt and Nazli Sabri, and so the youngest sister of Farouk I. 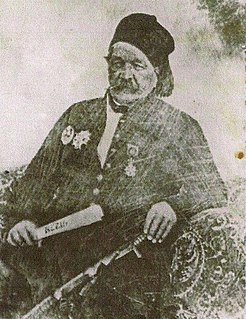 Faiza Fuad Rauf was an Egyptian princess and a member of the Muhammad Ali Dynasty. 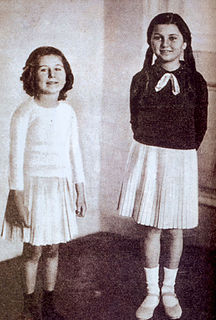 Faika Fouad Sadek (or Princess Faika was an Egyptian royal and a member of the Mohammad Ali Dynasty.

The Albanian community in Egypt started by Ottoman rulers and military personnel appointed in the Egyptian province. A substantial community would grow up later by soldiers and mercenaries who settled in the second half of the 18th century and made a name for themselves in the Ottoman struggle to expel French troops in 1798–1801. Muhammad Ali (1769–1849) who was of Albanian descent, was the ruler who had founded the New Kingdom of Egypt which lasted there until 1952. In the 19th and early 20th centuries, many other Albanians settled into Egypt for economical and political reasons. With the fedayeen, Muslim Brotherhood, and the culminating Egyptian Revolution of 1952 the Albanian community in Egypt totally diminished and they settled in Western countries.