Last updated May 04, 2021
For the people of a nation not affiliated with the government of that nation, see Public.

After the 1983 break-up of The Beat (known as the English Beat in North America), vocalists Dave Wakeling and Ranking Roger decided to continue working together in a new venture. [1] They joined up with keyboardist Mickey Billingham (Dexys Midnight Runners), guitarist Mick Jones (the Clash), bassist Horace Panter (the Specials) and drummer Stoker (Dexys Midnight Runners/the Bureau) to form a supergroup of the UK punk and ska scene. [1] They named the band General Public and were rapidly signed to Virgin Records in the UK and I.R.S. Records in North America.

The band recorded and released the album All the Rage in 1984. [1] Jones left General Public part way through the recording process, but he is listed in the album's inner sleeve credits as a group member (although he did not appear in any of the band photographs for the album cover). Jones' replacement, guitarist Kevin White, also played on the album and was also listed an official group member. White's picture also appeared on the album's back cover.

In the UK, General Public had a minor hit with the eponymous track "General Public", which reached No. 60 in the UK Singles Chart in 1984. [2] The single's B-side "Dishwasher" (an instrumental mix of "Burning Bright" from All The Rage) became a surprise Top 40 hit in the Netherlands, after its use as a closing theme tune to the pop radio show Avondspits.[ citation needed ]

Later in the year, the band fared even better in North America, where their second single "Tenderness" was a Top 30 hit in Canada (No. 11) and the US (No. 27). The song's success benefited from appearing in the John Hughes films Sixteen Candles (1984) and Weird Science (1985) from the time period, and it would later appear in Amy Heckerling's Clueless (1995) and in the horror film Devil's Due (2014). Meanwhile, another General Public song, "Taking the Day Off" was featured in Ferris Bueller's Day Off (1986).

For the follow-up album, White and Stoker were replaced by brothers Gianni and Mario Minardi on guitar and drums, respectively. Hand to Mouth was significantly less successful than their debut album, and the band dissolved soon after its release. [1] The 1993 reissue of the album includes "Taking The Day Off" and other non-album songs and remixes.

Roger and Wakeling worked on various solo projects for the next few years, before reconstituting General Public in 1994 to perform a cover version of the Staple Singers' hit "I'll Take You There" for the Threesome film soundtrack. The new General Public line-up retained only vocalists Wakeling and Roger from previous incarnations; the vocal duo was now backed by Michael Railton (keyboards), Randy Jacobs (guitars), Wayne Lothian (bass), Thomas White (drums), and Norman Jones (percussion). [1] "Rainy Days" was the big success in Brazil. "I'll Take You There" was a Top 40 hit in the US and Canada and a minor hit in the UK (No. 73). Jacobs and White then left the group, and new drummer Dan Chase was brought in. The sextet released the album Rub It Better for Epic Records in 1995, recorded in the US with the aid of record producer Jerry Harrison. [1] Guests on the album included former bandmate Mick Jones, Saxa, Pato Banton, and Chris Spedding; ex-band members Horace Panter and Stoker also participated in the album's creation, co-writing one song apiece. (Stoker also received an "additional recording" credit.) Sales were less than earlier albums, however, and Roger became tired of traveling to America, and they soon broke up again.

Since 2004, Dave Wakeling has toured the US with a full backing band as the English Beat. They often perform General Public tracks. [3] 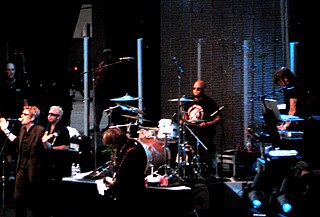 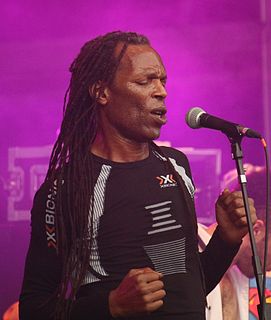 Roger Charlery, known professionally as Ranking Roger, was a British musician. He was a vocalist in the 1980s two-tone band the Beat and later General Public. He subsequently headed up a reformed Beat lineup. 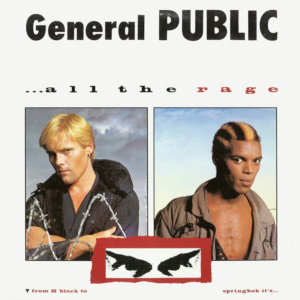 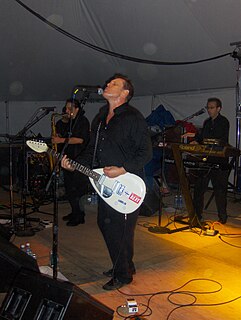 David Wakeling is an English singer, songwriter and musician, known for his work with the band the Beat, and General Public.

David "Shuffle" Steele is an English musician who was a member of the Beat and Fine Young Cannibals. 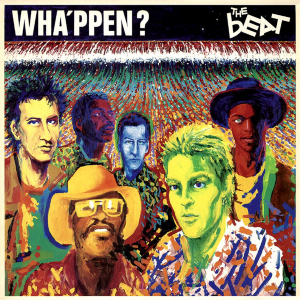 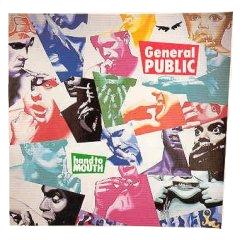 Hand to Mouth is the second album by General Public, released in 1986. 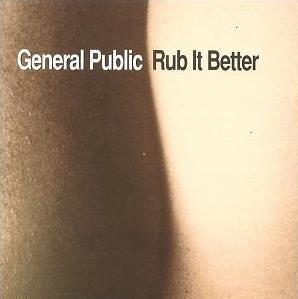 Rub It Better is the third album by General Public, released in 1995. The band had not recorded together in almost 10 years.

Eric M. Fowler is an American guitarist, singer, songwriter, composer and producer who is best known as a member of popular musical group Boxing Gandhis. Fowler is a featured musician on many popular recordings by artists such as Sting, UB40, Rosanne Cash, Taylor Dayne, General Public, Clint Black, Kelly Price and the Boxing Gandhis. He currently resides in Los Angeles California with his wife Colette and 3 children.

This is the discography of British 2-tone/ska band The Beat and its subsequent incarnations as The Beat featuring Ranking Roger based in the UK, and The English Beat starring Dave Wakeling based in the US.