Last updated August 26, 2021
Higher education qualification of the United Kingdom
Not to be confused with National Diploma (UK).

Higher National Diplomas are graded, usually based on a weighted average (with higher weight given to marks in the final year of the course, and often zero weight to those in the first year) of the marks gained in exams and other assessments. Grade boundaries may vary by institution, but usually follow the boundaries given below: [6] [7]

In England, Wales, and Northern Ireland, the HND is a qualification awarded by many awarding bodies, such as the Confederation of Tourism and Hospitality (CTH Advanced diploma), Scottish Qualifications Authority (SQA) and BTEC (Vocational programs). In Scotland, a Higher National is awarded by the Scottish Qualifications Authority (SQA). [8] [9] The attainment level is roughly equivalent to the second year of a 3-year English degree or to a Diploma of Higher Education. [10] An HND takes two years of full-time study, or one year full-time following successful completion of a Higher National Certificate; part-time study takes longer. [11]

In Nigeria, HND is a continuation of a National Diploma (ND-[equivalent to associate degree]) programme, both offered by polytechnics. The ND and HND programmes have a duration of two years each with one-year break after the ND programme for an Industrial Training (IT) attachment in relevant industries. At the completion of an HND programme, the graduate would have spent 4 to 5 years; hence, Higher National Diplomas are sometimes referred to "equivalent" of a University bachelor's degree or four years of a university education. Although, there have existed a long-standing disagreement over the "equivalence" of Polytechnic HND degree to University bachelor's degree; employers of labour (including the government and its policies) have discriminated against HND holders—grading them below their university counterparts and preventing them from attaining managerial or directorate cadres. However, following series of efforts [12] by polytechnic students/lecturers and concerned entities, the federal government has made attempts [13] [14] to remove the dichotomy between Polythecnic HND degree holders and University degree holders in places of employment, and the efforts are paying off as some of the government organisations (especially paramilitary) have started upgrading and employing the HND-holders at par with their University Degree counterparts. [15] [16] Some have even claimed that the HND graduates are better than their university counterparts in the same field, arguing that they write the same entrance exams to seek admission to their course/program of study - the JAMB exams to secure an admission , they both spend the same number of years studying, both completing 120 college credit units with HND holders concentrating more on technicalities, sometimes taking more than 120 credit units and getting more hands on . [17] The HND degree offers limited libral arts subjects and goes straight into the technicalities of a course using industry standards from year one of OND (one can only gain admission into a HND program after completing two years of OND, an equivalent of an associate degree) and by the final year of HND the student is already equipped to practice in the field.

The Postgraduate Certificate in Education (PGCE/PGCertEd) is a one- or two-year higher education course in England, Wales and Northern Ireland which provides training in order to allow graduates to become teachers within maintained schools. In England, there are two routes available to gaining a PGCE – either on a traditional university-led teacher training course or school-led teacher training.

A Diploma of Higher Education (DipHE) is a higher education qualification in the United Kingdom. It is awarded after two years of full-time study at a university or other higher education institution. Rated as a Level 5 qualification on both the Regulated Qualifications Framework for England, Wales and Northern Ireland, and the European Qualifications Framework, the DipHE was once seen as the more academic equivalent of the Higher National Diploma, which was perceived as vocational. However, universities have since integrated both qualifications into the first and second years of an undergraduate honours degree, and they can now be considered equivalent. 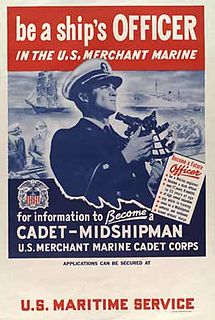 A deck cadet is an apprentice who has to learn the basic duties of a deck officer on board a ship. The cadet has to complete the prescribed sea-time in order to take the exams of the second mate. Even though the cadet is on board they still have to complete their studies. They have to undergo various forms of training, watch-keeping with chief officer, at port with second mate and normal deck jobs with the Bosun.

Higher Nationals are a suite of internationally-recognised higher education qualifications at level 4 (HNC) and 5 (HND) that are equivalent to the first and second years of a university bachelor degree, providing progression to over 95% of UK Universities including the University of Oxford at an advanced level.

Apprenticeships have a long tradition in the United Kingdom, dating back to around the 12th century. They flourished in the 14th century and were expanded during the industrial revolution. In modern times, apprenticeships were formalised in 1964 by act of parliament and they continue to be in widespread use to this day.