Hornibrook Bus Lines is an Australian operator of bus services in the Redcliffe Peninsula and surrounding Upper Bayside area of Brisbane. It operates 16 services under contract to the Government of Queensland under the TransLink banner.

In 1975 Hornibrook Bus Lines was purchased by Geoff Mountjoy. [2] By the late 1980s it had purchased Redcliffe-Brisbane Bus Service and Sandgate-Lutwyche Bus Service. [1]

Depots are operated in Clontarf, Lawnton, North Lakes and Richlands.

Hornibrook Bridge is a heritage-listed mostly-demolished road bridge on the Hornibrook Highway over Hays Inlet at Bramble Bay from Brighton, City of Brisbane to Clontarf, Moreton Bay Region, Queensland, Australia. It was designed by Manuel Hornibrook and built from 1932 to 1935 by Manuel Hornibrook. It was added to the Queensland Heritage Register on 7 October 1994. 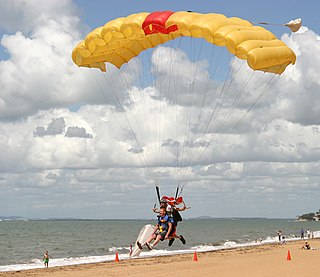 Redcliffe is a residential suburb in the Moreton Bay Region LGA in the north-east of the Brisbane metropolitan area in Queensland, Australia. It also refers colloquially to the Redcliffe Peninsula as a whole, a peninsula jutting into Moreton Bay which contains several other suburbs. Since the 1880s, Redcliffe has been a popular seaside resort in South East Queensland.

Volgren is an Australian bus coachbuilder. 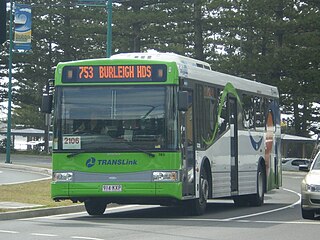 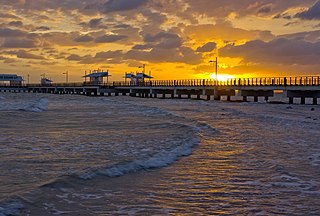 The Redcliffe Peninsula is a peninsula located in the Moreton Bay Region LGA in the northeast of the Brisbane metropolitan area in Queensland, Australia. The area covers the suburbs of Clontarf, Kippa-Ring, Margate, Newport, Redcliffe, Rothwell, Scarborough and Woody Point.

Murrays Coaches is an Australian express and coach charter company.

Clontarf is a coastal suburb of the Moreton Bay Region, Queensland, Australia. It is in the south-west of the Redcliffe peninsula, approximately 29 kilometres (18 mi) north-northeast of Brisbane, the state capital. It was named after Clontarf in Ireland.

National Bus Company was an Australian bus operator in Melbourne until August 2013. It also formerly operated buses in Brisbane between August 1997 and September 2004.

Martyrs Bus Service is a bus and coach operator in Melbourne, Australia. As a Melbourne bus company, it operates one bus route under contract to the Government of Victoria and is a brand of the Dineen Group.

Transdev Queensland Bus is an Australian operator of bus services in the Redland City region of Brisbane. It operates 31 services under contract to the Government of Queensland under the TransLink banner. It is a subsidiary of Transdev Australasia.

Kippa-Ring railway station is the terminus of the Redcliffe Peninsula railway line and serves the suburb of Kippa-Ring in Moreton Bay Region, Queensland, Australia. It features a park & ride facility and local bus stops. A stabling facility, capable of holding 10 six car trains, is located to the west of the station. It opened, together with the rail line, on 4 October 2016.

Newmans Coach Lines was an Australian coach charter company with operations in Sydney and Cairns.