Ismael Londt (born 12 July 1985) is a Surinamese-Dutch kickboxer. He is the current SUPERKOMBAT Heavyweight Champion. As of 5 March 2020, he is ranked the #10 heavyweight in the world by Combat Press. [1]

He was scheduled to have his rubber match with Sergei Lascenko on 10 November 2012 in Craiova, Romania at the SUPERKOMBAT World Grand Prix 2012 Final Elimination, in the tournament. However, Lascenko was forced to pull out of the bout due to injuries sustained in his previous bout and replaced by Daniel Sam. [5] [6] Londt won by TKO in round one when the doctor stopped Sam from continuing due to a swollen eye. [7] [8]

He rematched Sebastian Ciobanu in the semi-finals at the SUPERKOMBAT World Grand Prix 2012 Final on 22 December in Bucharest, and won by TKO due to a cut in round two. In the final, he lost a unanimous decision to Pavel Zhuravlev after an extension round as he finished as runner-up for the second year in a row. [9]

At the K-1 World Grand Prix 2012 Final on 15 March 2013 in Zagreb, Croatia, he faced Hesdy Gerges in the quarter-finals [10] and won by TKO in round three after breaking the Egyptian's nose with a flying knee. In the semis, he went up against Dževad Poturak, who was filling in for an injured Badr Hari, and won by another knee TKO when he broke Poturak's rib in round two. He lost to Mirko Cro Cop in the tournament final, dropped with a left high kick in round two before losing a unanimous decision. [11] [12]

He was expected to defend his SUPERKOMBAT Heavyweight Title against Cătălin Moroșanu at the SUPERKOMBAT World Grand Prix IV 2014 in Almere, Netherlands on 27 September 2014. However, he pulled out once again this time due to undisclosed reasons. [16] 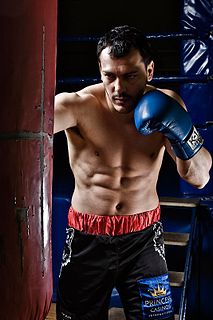 Zabit Samedov is an Azerbaijani kickboxer fighting out of Chinuk Gym in Minsk, Belarus. He has competed in the K-1, It's Showtime and SUPERKOMBAT promotions.

Paul "The Sting" Slowinski is a Polish kickboxer, a four-time World Muay Thai Council (WMC) Muay Thai World champion and two-time K-1 World GP 2006 in Auckland and K-1 World GP 2007 in Amsterdam champion. After two years training in Amsterdam, Netherlands under Ernesto Hoost, Slowinski moved back to Adelaide in 2009 and began to teach and train out of Rikers Gym. He has competed in the K-1 and SUPERKOMBAT promotions.

Frédéric "Freddy" Kemayo is a French Heavyweight kickboxer. He is a three-time French Kickboxing Champion. 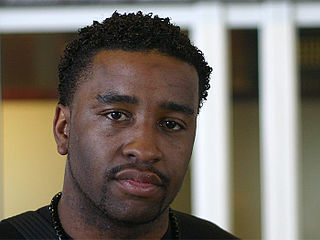 Cătălin Moroșanu is a Romanian kickboxer, currently competing in the heavyweight division of the Dynamite Fighting Show (DYNAMITE), and former professional rugby player. He is the winner of season 9 of Dancing with the Stars and winner of I'm a Celebrity...Get Me Out of Here! Season 1.

Serhiy Lashchenko, also spelled as Sergii Lashchenko and Sergei Lascenko, was a Ukrainian kickboxer. He was a K-1 and Superkombat Heavyweight.

Hesdy Gerges is an Egyptian-Dutch kickboxer, fighting out of the Vos Gym in Amsterdam, Netherlands. He held the It's Showtime World Heavyweight title until January 28, 2012. Gerges has competed in the K-1, It's Showtime, SUPERKOMBAT and GLORY promotions and is currently signed to Bellator.

Bogdan Cristian Stoica is a Romanian kickboxer and former wushu practitioner. He is currently signed to Enfusion, where he is the reigning champion of the light-heavyweight division. He is also one-time SUPERKOMBAT Cruiserweight Champion and two-time wushu national champion.

Benjamin Adekunle Miron Adegbuyi is a Romanian kickboxer and professional boxer. He is a two-time Glory Heavyweight Championship challenger and three-time winner of heavyweight tournament. Adegbuyi is also Superkombat World Grand Prix III 2012 tournament winner. A professional since 2011, he also fought in K-1.

"Son of Dracula" Sebastian Ciobanu is a Romanian Super heavyweight kickboxer fighting in the K-1 and SUPERKOMBAT promotions.

Ionuţ Atodiresei is a Romanian Middleweight kickboxer. As kickboxer, he fight in Local Kombat and SUPERKOMBAT Fighting Championship.

Frank Muñoz is a Spanish heavyweight kickboxer fighting in the SUPERKOMBAT Fighting Championship where he is the 2013 SUPERKOMBAT World Grand Prix Tournament Champion. He is also current WAKO-Pro K-1 European champion.

D'Angelo Marshall is a Curaçaoan-Dutch kickboxer, who is signed to the SUPERKOMBAT. He is currently living in Zaandam but is fighting out of his birth town Amsterdam.

Igor Bugaenko,, also known as Ihar Buhaenka is a Belarusian kickboxer and current SUPERKOMBAT Cruiserweight Champion. He has also won the Tatneft Arena World Cup twice, in 2008 and 2014.

Jafar Ahmadi is an Iranian kickboxer fighting in the heavyweight division.