Kenya's captain Aberdeen Shikoyi died on 29 May 2012 after an injury she sustained in a match against Uganda.

Kenya, officially the Republic of Kenya, is a country in Africa with 47 semiautonomous counties governed by elected governors. At 580,367 square kilometres (224,081 sq mi), Kenya is the world's 48th largest country by total area. With a population of more than 52.2 million people, Kenya is the 27th most populous country. Kenya's capital and largest city is Nairobi while its oldest city and first capital is the coastal city of Mombasa. Kisumu City is the third largest city and also an inland port on Lake Victoria. Other important urban centres include Nakuru and Eldoret.

Aberdeen Shikoyi was a Kenyan rugby union player. She was the captain of the women's rugby union team. Shikoyi sustained a spinal injury during a rugby match and died a few days later.

The 2015 Women's Africa Cup Sevens was a women's rugby sevens tournament for the continental championship of Africa and a qualification tournament for rugby sevens at the 2016 Summer Olympics. The competition was held in Kempton Park, South Africa on 26–27 September 2015. It was the fifth all-continental African Women's Sevens Championship, hosting teams from both Northern and Southern Africa.

The following is the Kenya roster in the women's rugby sevens tournament of the 2016 Summer Olympics. [5]

The New Zealand national rugby sevens team competes in the World Rugby Sevens Series, Rugby World Cup Sevens, Summer Olympic Games and the Commonwealth Games. The team has been officially known as the All Blacks Sevens since 1 June 2012. 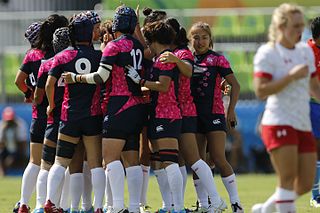 The Japan women's national rugby sevens team has competed in competitions such as the Hong Kong Women's Sevens. 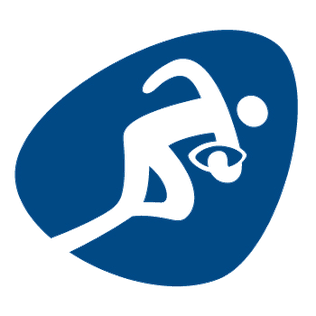 Timothy Ernest Victor Kwizera Agaba is a Ugandan-born South African rugby union player for the Bulls in Super Rugby, the Blue Bulls in the Currie Cup and the Blue Bulls XV in the Rugby Challenge. His regular position is flanker or number eight.

The United States competed at the 2016 Summer Paralympics in Rio de Janeiro, Brazil, from 7 September to 18 September 2016. The first places the team qualified were for three athletes in sailing events. They also qualified athletes in archery, goalball, shooting, swimming, and wheelchair basketball.

France competed at the 2016 Summer Olympics in Rio de Janeiro, Brazil, from 5 to 21 August 2016. French athletes had appeared in every Summer Olympic Games of the modern era, alongside Australia, Great Britain, and Greece. The French Olympic Committee sent its largest ever delegation in Olympic history outside of when it was the host nation, with a total of 401 athletes, 232 men and 169 women, competing in all sports, except field hockey.

South Africa competed at the 2016 Summer Olympics in Rio de Janeiro, from 5 to 21 August 2016. This was the nation's seventh consecutive appearance at the Games in the post-apartheid era, and nineteenth overall in Summer Olympic history. The South African Sports Confederation and Olympic Committee (SASCOC) sent the nation's largest ever delegation to the Olympics, with a total of 138 athletes, 93 men and 45 women, competing across 15 sports.

This article shows the rosters of all participating teams at the men's rugby sevens tournament at the 2016 Summer Olympics in Rio de Janeiro.

This article shows the rosters of all participating teams at the women's rugby sevens tournament at the 2016 Summer Olympics in Rio de Janeiro.