Shankar was born in Madras, India, and raised in Ceylon (current-day Sri Lanka), where his father V. Lakshminarayana, a violinist and singer, worked as a teacher at the Jaffna College of Music. [1] He learned to play the violin and first performed in public in a Ceylonese temple at the age of seven. [1]

In 1969, he went to the United States, where he studied ethnomusicology at Wesleyan University.

After performing with various Indian singers for several years, Shankar founded a trio with his brothers L. Vaidyanathan and L. Subramaniam that performed throughout India.

While attending college at Wesleyan University, he met jazz musicians like Ornette Coleman, Jimmy Garrison, and John McLaughlin. With McLaughlin, Shankar founded the group Shakti in 1975, one of the early groups in which Eastern and Western musical traditions met. They released three albums: Shakti (1975), A Handful of Beauty (1976), and Natural Elements (1977).

After the band dissolved, Shankar was a violinist with Frank Zappa for a short time and then founded the group The Epidemics and released a number of albums as a band leader. With Peter Gabriel, he wrote the soundtrack for the film The Last Temptation of Christ (1989), for which he received a Grammy Award. In the following years, Shankar worked on several of Gabriel's albums. Since 1996, he has been working with the violinist Gingger as the Duo Shankar & Gingger.

Mahavishnu Orchestra were a jazz fusion band formed in New York City in 1971, led by English guitarist John McLaughlin. The group underwent several line-up changes throughout its history across two stints from 1971 to 1976 and 1984 to 1987. With its first line-up consisting of musicians Billy Cobham, Jan Hammer, Jerry Goodman and Rick Laird, the band received its initial acclaim for its complex, intense music consisting of a blend of Indian classical music, jazz and psychedelic rock, and its dynamic live performances between 1971 and 1973.

Shakti with John McLaughlin is the first album by Shakti, described as "another brain blowing achievement" by Agha Yasir.

John Bergamo was an American percussionist and composer known for his film soundtrack contributions and his work with numerous other notable performers. From 1970 until his death, he was the coordinator of the percussion department at the California Institute of the Arts.

Remember Shakti is a quintet which combines elements of traditional Indian music with elements of jazz. The band consists of English guitarist John McLaughlin, and Zakir Hussain (tabla), U. Srinivas (deceased) (mandolin), Shankar Mahadevan (vocals), and V. Selvaganesh, who are of Indian descent. The band's name is derived from John Mclaughlin's acoustic Indian fusion band Shakti which was active in the 1970s. This band consisted of John McLaughlin, Zakir Hussain, L. Shankar, T.H. "Vikku" Vinayakram, and R. Raghavan. The word Shakti translates in Sanskrit to "power" or "goddess of power". 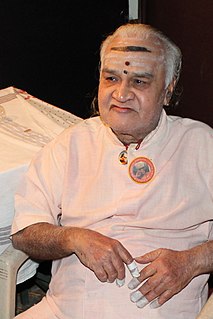 John Wolf Brennan is an Irish pianist, organist, melodica player, and composer based in Weggis, Switzerland.

Gingger Shankar is an Indian American singer, composer and multi-instrumentalist. She has scored several films, including Circumstance.

Lakshminarayana Vaidyanathan was an acclaimed musicologist, music director and composer, trained in the classical Carnatic music tradition. Vaidyanathan was born in Chennai to V. Lakshminarayana, and Seethalakshmi, both accomplished musicians. He was the elder brother of accomplished violinist duo L. Shankar and L. Subramaniam. He created the tunes of the iconic TV serial Malgudi Days. All three brothers received their musical training from their father.

L. Shankar has served as an instrumentalist, composer, record producer, arranger and programmer on several recordings. He has released a number of his own recordings, in addition to appearing on other artists' albums. All credits are for violin, except where noted. This is not an exhaustive list of Shankar's works, but a select few titles.

Natural Elements is a studio album by the world fusion band Shakti. It was released in 1977 on CBS Records.

A Handful of Beauty is the second studio album released by the world fusion band Shakti in 1976.

Ranjit Barot is an Indian film score composer, music director, music arranger, drummer and singer based in Mumbai, India. He is a longtime associate of A. R. Rahman.

Who's to Know is an album by violinist Shankar recorded in 1980 and released on the ECM label.

Viji Subramaniam, also known as Viji Shankar, was the daughter of noted North Indian singer Lakshmi Shankar and Rajendra Shankar. Like her mother and uncle, Viji was a musician and well-trained in both of the Indian classical systems.