Last updated March 17, 2020
This article is about lifesaving activities in general. For lifesaving on beaches, see Surf lifesaving.

Lifesaving is the act involving rescue, resuscitation and first aid. It often refers to water safety and aquatic rescue; however, it could include ice rescue, flood and river rescue, swimming pool rescue and other emergency medical services. Lifesaving also refers to sport where lifesavers compete based on skills, speed and teamwork. Lifesaving activities specialized in oceanic environment is called surf lifesaving or coastal lifesaving. [1]

The first life saving organisation, the Royal National Institution for the Preservation of Life from Shipwreck, was established in England in 1824 by Sir William Hillary. [2] While living on the Isle of Man in 1808, he became aware of the treacherous nature of the Irish Sea, with many ships being wrecked around the Manx coast. He soon drew up plans for a national lifeboat service manned by trained crews, but received little response from the Admiralty.

However, on appealing to the more philanthropic members of London society, the plans were adopted and, with the help of two Members of Parliament (Thomas Wilson and George Hibbert), the National Institution for the Preservation of Life from Shipwreck was founded in 1824.

One of the Institution's first rescues was of the packet St George, which had foundered on Conister Rock at the entrance to Douglas Harbour. Hillary took part in the successful operation and everyone was ultimately rescued. Thirty years later the Institution's title was changed to the Royal National Lifeboat Institution and the first of the new lifeboats to be built was stationed at Douglas in recognition of Hillary's work.

The International Life Saving Federation (ILS) was established on 27 March 1910 in Paris, France. The ILS is primarily known as the world authority and head in the global effort to "prevent drowning and regroups national life saving organisations/federations aiming at improving water safety, water rescue, lifesaving and lifeguarding and lifesaving sport [3] ".

Surf lifesaving developed in Australia and is often simply called "lifesaving". It focuses on drowning prevention and rescue in a coastal setting. General lifesaving does not limit its activities to beaches - its aim is to promote water safety around ponds, lakes, rivers, pools, in the home, at school and in any other applicable environments. [4] This is why landlocked countries like Switzerland, Austria, Kazakhstan, Macedonia, Serbia, Azerbaijan, Czech Republic and Slovakia, are also full members of ILS.

Lifesavers are volunteers and usually stationed at a club house. They provide training for lifesaver/lifeguard qualifications as well as educating the general public.

Life saving has become a growing sport in many countries. [5] The sport can be played indoors in swimming pools or outside on beaches, in the same way that you get pool lifeguards and beach lifeguards.

Lifesaving is an official discipline of the World Games, the Games with all the sports, recognized by the IOC but not yet in the Olympic program. [6]

Cardiopulmonary resuscitation, otherwise known as CPR is the most common form of life saving. CPR can be easily understood through this simplified table. [7]

All collapsed victims should be carefully assessed to decide what emergency care is needed. This method of assessment is known as DRSABCD, this method is explained in the following table. [8]

Surf lifesaving is a multifaceted movement that comprises key aspects of voluntary lifeguard services and competitive surf sport. Originating in early 20th century Australia, the movement has expanded globally to other countries including New Zealand, Ireland, South Africa, the United Kingdom. Surf lifesavers in Australia are colloquially known as "Clubbies".

A lifeguard is a rescuer who supervises the safety and rescue of swimmers, surfers, and other water sports participants such as in a swimming pool, water park, spa, beach or river and lake. Lifeguards are strong swimmers and trained in CPR/AED first aid, certified in water rescue using a variety of aids and equipment depending on requirements of their particular venue. In some areas, lifeguards are part of the emergency services system to incidents and in some communities,lifeguards may function as the primary EMS provider.

The German Life Saving Association is a relief organization for life saving in Germany. The DLRG is the largest voluntary lifesaving organization in the world.

The Royal Life Saving Society UK is a drowning prevention charity founded in 1891 in the UK. It has had Royal Patronage since 1904. 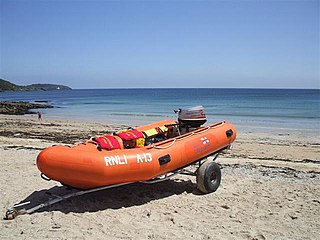 The Arancia-class inshore rescue craft is a class of small inflatable rescue boat (IRB) operated by Surf Life Saving Great Britain, Surf Lifesaving Wales and the RNLI of the United Kingdom and Ireland.

The Royal Life Saving Society Canada operates throughout Canada as the Lifesaving Society. The Lifesaving Society is a national, volunteer and charitable organization and registered charity composed of 10 provincial/territorial Branches, tens of thousands of individual members, and over 4,000 affiliated swimming pools, waterfronts, schools and clubs. The Society works to prevent drowning and water-related injury through its training programs, Water Smart public education, drowning prevention research, safety management and lifesaving sport.

The Bronze Medallion, signifying a qualified lifesaver, has been a lifesaving standard award of The Royal Life Saving Society - Australia and Surf Life Saving Australia for over one hundred years. It was developed in England in 1892. It has evolved over the years to accommodate the environmental conditions of Australia.

A rescue lifeboat is a boat rescue craft which is used to attend a vessel in distress, or its survivors, to rescue crew and passengers. It can be hand pulled, sail powered or powered by an engine. Lifeboats may be rigid, inflatable or rigid-inflatable combination hulled vessels.

The Rashtriya Life Saving Society (India) [RLSSI] is a national, non-profit, voluntary organisation dedicated to helping people to learn modern lifesaving techniques. The Society is the leading provider of training in first aid, resuscitation, water safety, life saving and life guarding skills in India. The Society is a member of the International Life Saving Federation and branch of the Royal Life Saving Society Commonwealth.

The ILS World Life Saving Championships are the world championships for life saving sport events. They are sanctioned by the International Life Saving Federation (ILS), conducted every 2 years, and commonly marketed and known as the ‘Rescue’ series, for example – Rescue 2008.

The Surf Life Saving Association of Wales (SLSAW) is the national governing body of surf lifesaving in Wales. It is a voluntary, not-for-profit, registered charity organisation. Its goal is "to prevent the loss of life through drowning". The SLSAW organise regional and national competitions—such as the SLSA Wales Stillwater Leagues and the SLSA Wales Ocean Masters Championships – and select and manage the Wales squad for international events, including the Celtic Challenge Cup.

The Bondi Surf Bathers' Life Saving Club is Australia's oldest Surf Life Saving Club, founded in 1907. The club was officially established on 21 February 1907 at the Royal Hotel in Bondi Beach, Sydney, New South Wales. The clubs aim is to ensure "No Lives Lost" at Bondi Beach and is a volunteer organisation that patrols Bondi Beach from October to April every year. 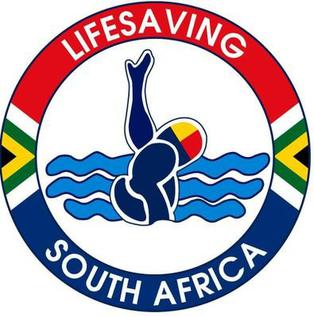 Simon Lewis is an international humanitarian lifeguard and volunteer surf lifesaver. Once the former St Kilda Lifesaving Club Captain, he is now the only Australian lifeguard to have worked both major migration routes in Europe. Simon first became part of a team of six on lesvos Greece with International Surf Lifesaving Association (ISLA). Since joining the mission with ISLA, Lewis has completed seven humanitarian rescue missions with six NGOs saving the lives of over 1,900 African and Syrian refugees as they attempted to cross the dangerous waters of the Mediterranean Sea to Greece and Italy. As well as being the first Australian to become the head of mission on the central migration route for the German NGO Mission Lifeline. Simon participated in the Asylum Seeker Resource Centre (ASRC) yearly telethon which raised over $800,000 for the organisation to continue to help those in dire need. Lewis became one of the most known, respected and awarded lifeguards with the search and rescue community globally.

Lifesaving is an official discipline of the World Games, the Games with all the sports, recognized by the IOC but not yet in the Olympic program.