Formula One is the highest class of single-seater auto racing sanctioned by the Fédération Internationale de l'Automobile (FIA) and owned by the Formula One Group. The World Drivers' Championship, which became the FIA Formula One World Championship in 1981, has been one of the premier forms of racing around the world since its inaugural season in 1950. The word "formula" in the name refers to the set of rules to which all participants' cars must conform. A Formula One season consists of a series of races, known as Grands Prix, which take place worldwide on purpose-built circuits and on public roads.

The National Association for Stock Car Auto Racing (NASCAR) is an American auto racing sanctioning and operating company that is best known for stock-car racing. The privately–owned company was founded by Bill France Sr. in 1948, and his son, Jim France, has been the CEO since August 6, 2018. The company is headquartered in Daytona Beach, Florida. Each year, NASCAR sanctions over 1,500 races at over 100 tracks in 48 US states as well as in Canada, Mexico, and Europe.

The Supercars Championship is a touring car racing category in Australia and run as an International Series under Fédération Internationale de l'Automobile (FIA) regulations. 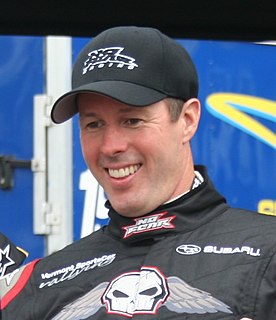 The 1996 Indy Racing League, the first in the history of the league, consisted of only three races, as the season concluded in May with the 80th Indianapolis 500. Walt Disney World Speedway was completed in time to host the first race of the season, and the first ever event of the IRL, and Phoenix International Raceway switched alliances from CART to IRL and hosted the second event of the season. At the conclusion of the three-race schedule, Scott Sharp and Buzz Calkins ended up tied for first place in the season championship. With no tiebreaker rule in place, the two drivers were declared co-champions.

The Australian Rally Championship (ARC) is Australia's leading off-road motor rally competition. A multi-event national championship has been held each year since 1968.

The Triple Crown of Motorsport is an unofficial motorsport achievement, often regarded as winning three of the most prestigious motor races in the world in one's career:

The 2007 Allstate 400 at The Brickyard, the 14th running of the event, was the twentieth race of the 2007 NASCAR Nextel Cup Series season and the first of the season that was televised by NASCAR on ESPN. It was held on July 29, 2007 at the Indianapolis Motor Speedway in Speedway, Indiana.

The Dunlop Super2 Series is an Australian touring car racing competition, specifically the second tier series for Supercars competitors. Competing vehicles are older than those utilised in the Supercars Championship series and are usually run by smaller teams with lower budgets. Approximately half the teams are for 'gentleman racers', while some team owners will put a young emerging driver into the car and team they own. The series runs half the number of events that the Supercars Championship runs.

The 2018 Rally Argentina was a motor racing event for rally cars that was held over four days between 26 and 29 April 2018. It marked the thirty-eighth running of Rally Argentina, and was the fifth round of the 2018 World Rally Championship and its support categories, the WRC-2 and WRC-3 championships. The event was based in Villa Carlos Paz in Córdoba Province and consisted of eighteen special stages totalling 358.25 km (222.61 mi) competitive kilometres.