For continuation after independence, see: List of heads of state of Malawi

Malawi, officially the Republic of Malawi, is a landlocked country in Southeastern Africa that was formerly known as Nyasaland. It is bordered by Zambia to the west, Tanzania to the north and northeast, and Mozambique surrounding on the east, south and southwest. Malawi spans over 118,484 km2 (45,747 sq mi) and has an estimated population of 18,143,217. Lake Malawi takes up about a third of Malawi's area. Its capital is Lilongwe, which is also Malawi's largest city; the second largest is Blantyre, the third largest is Mzuzu and the fourth largest is its old capital Zomba. The name Malawi comes from the Maravi, an old name of the Nyanja people that inhabit the area. The country is nicknamed "The Warm Heart of Africa" because of the friendliness of the people.

The flag of Malawi was officially adopted on 6 July 1964 when the colony of Nyasaland became independent from British rule and renamed itself Malawi. 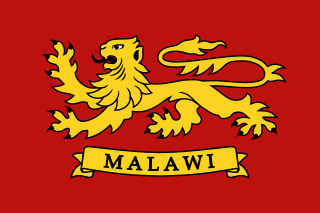 The Malawi Congress Party (MCP) is a political party in Malawi. It was formed as a successor party to the banned Nyasaland African Congress when the country, then known as Nyasaland, was under British rule. The MCP, under Hastings Banda, presided over Malawian independence in 1964, and from 1966 to 1993 was the only legal party in the country. It has continued to be a major force in the country since losing power. In the 2009 elections, it received approximately 30% of the national vote.

Malawi have participated in twelve Commonwealth Games, attending every one from 1970 onwards. They have won only three medals, all bronze and all in boxing.

This is a survey of the postage stamps and postal history of Malawi.

Malawi was a predecessor to the modern-day Republic of Malawi. It existed between 1964 and 1966. When British rule ended in 1964, by the Malawi Independence Act 1964, the Nyasaland Protectorate, formerly a constituent of the Federation of Rhodesia and Nyasaland, became an independent sovereign state. The British monarch was head of state and Malawi shared the sovereign, Queen Elizabeth II, with the other Commonwealth realms. The monarch's constitutional roles were mostly delegated to the Governor-General of Malawi, Sir Glyn Smallwood Jones.

On 6 July 1907 the British Central Africa Protectorate became the Nyasaland Protectorate and its first stamps were issued on 22 July 1908.

Malawi and the United Kingdom have formal diplomatic relations. They are both Commonwealth countries.

For two years from Malawi's independence in 1964, the country was a monarchy with Elizabeth II as its queen. She was also the Sovereign of the other Commonwealth realms, including the United Kingdom. The 1964 Constitution of Malawi vested executive power in the Queen, as head of state, though her constitutional roles were delegated to her representative, the Governor-General. 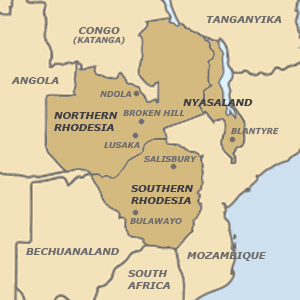 The Nyasaland Constitutional Party (NCP) was a political party in Malawi.

Michael Hill Blackwood,CBE (1917-2005) was a lawyer and politician who spent most of his working life in colonial Nyasaland and in Malawi in the early years of its independence. Although he represented the interests of European settlers before independence and opposed both the transfer of power to the African majority and the break-up of the Federation of Rhodesia and Nyasaland, he remained in the country as a member of its legislature after Malawi’s independence and until his retirement on 1983. 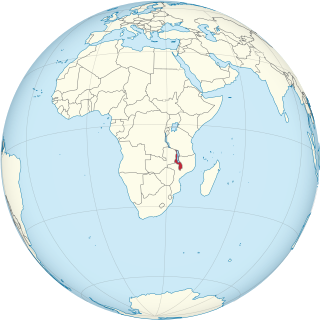