Sir Mark Edward Welland, FRS , FREng (born 18 October 1955) is professor of nanotechnology at the University of Cambridge and head of the Nanoscience Centre. He has been a fellow of St John's College, Cambridge, since 1986 and started his career in nanotechnology at IBM Research, where he was part of the team that developed one of the first scanning tunnelling microscopes. [1] [2] [3] [4] [5] [6] [7] [8] [9] He was elected as the master of St Catharine's College, Cambridge and took up office on 1 October 2016. [10]

Welland moved to Cambridge in 1987 and set up the first tunnelling microscopy group in the UK in collaboration with John Pethica. Currently at the Nanoscience Centre at the University of Cambridge researches into a number of aspects of nanotechnology ranging from sensors for medical applications to understanding and controlling the properties of nanoscale structures and devices.

In a recent award by the UK Research Councils, Welland has been made Director of an Interdisciplinary Research Collaboration in nanotechnology that, along with a purpose-built facility, represents an investment of $28 million for nanotechnology research at Cambridge. Until 2008, he was Editor-in-Chief of the Institute of Physics journal Nanotechnology, established in 1990, and, along with many other contributions at an international level, co-chairs the recently established Co-operative Research Initiative in Nanotechnology (CORINT) between the UK and Japan with Hiroyuki Sakaki of the University of Tokyo. He is also a Member of Council of the Royal United Services Institute.

Welland is also on the advisory board of Seraphima Ventures – a venture capital firm focusing mainly on nanotechnology startup companies.

In April 2008 he was appointed Chief Scientific Adviser (CSA) to the Ministry of Defence. [15]

Welland is married to Esme Lynora Otun. Together they have four children: two sons and two daughters. [11]

Welland was knighted in the 2011 Queen's Birthday Honours. [18] [19] In 2002, his contributions to nanotechnology research were recognised through his election to Fellowships of the Royal Society and Royal Academy of Engineering. [20] His nomination for the Royal Society reads:

Mark Welland is a world leader in nanotechnology and scanned probe microscopy. His achievements combine the development of new experimental tools for nanoscale characterisation with the modelling of nano-scale properties, and an interdisciplinary approach to practical applications. His contributions include determining the mechanical properties of single molecules, and of molecular layers and polymer films at the nanometre scale; local electronic properties of semiconductors, insulators and metallic nanowires; optical property determination with atomic resolution; size and shape effects in sub-micron magnetic structures; sensors for chemical and biochemical recognition, and synthesis of new materials by direct nano-fabrication. His seminal contributions are internationally recognised, he leads an IRC, and he continues to be a fertile originator of new nano-scale science and technology. [21]

In 2014, he was awarded an honorary Doctor of Science from the University of Bristol.

Nanotechnology is manipulation of matter on an atomic, molecular, and supramolecular scale. The earliest, widespread description of nanotechnology referred to the particular technological goal of precisely manipulating atoms and molecules for fabrication of macroscale products, also now referred to as molecular nanotechnology. A more generalized description of nanotechnology was subsequently established by the National Nanotechnology Initiative, which defines nanotechnology as the manipulation of matter with at least one dimension sized from 1 to 100 nanometers. This definition reflects the fact that quantum mechanical effects are important at this quantum-realm scale, and so the definition shifted from a particular technological goal to a research category inclusive of all types of research and technologies that deal with the special properties of matter which occur below the given size threshold. It is therefore common to see the plural form "nanotechnologies" as well as "nanoscale technologies" to refer to the broad range of research and applications whose common trait is size. 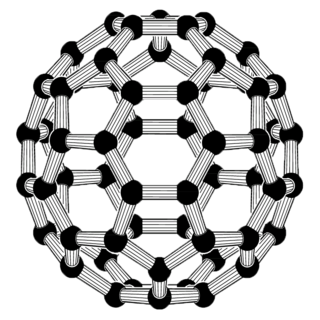 Nanomaterials describe, in principle, materials of which a single unit small sized between 1 and 100 nm.

Nanorobotics is an emerging technology field creating machines or robots whose components are at or near the scale of a nanometer. More specifically, nanorobotics refers to the nanotechnology engineering discipline of designing and building nanorobots, with devices ranging in size from 0.1–10 micrometres and constructed of nanoscale or molecular components. The terms nanobot, nanoid, nanite, nanomachine, or nanomite have also been used to describe such devices currently under research and development. 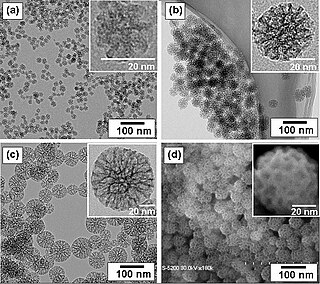 A nanoparticle or ultrafine particle is usually defined as a particle of matter that is between 1 and 100 nanometres (nm) in diameter. The term is sometimes used for larger particles, up to 500 nm, or fibers and tubes that are less than 100 nm in only two directions.

Charles M. Lieber is an American chemist and pioneer in nanoscience and nanotechnology. In 2011, Lieber was named by Thomson Reuters as the leading chemist in the world for the decade 2000-2010 based on the impact of his scientific publications. He is known for his contributions to the synthesis, assembly and characterization of nanoscale materials and nanodevices, the application of nanoelectronic devices in biology, and as a mentor to numerous leaders in nanoscience.

The impact of nanotechnology extends from its medical, ethical, mental, legal and environmental applications, to fields such as engineering, biology, chemistry, computing, materials science, and communications.

Nanoelectronics refers to the use of nanotechnology in electronic components. The term covers a diverse set of devices and materials, with the common characteristic that they are so small that inter-atomic interactions and quantum mechanical properties need to be studied extensively. Some of these candidates include: hybrid molecular/semiconductor electronics, one-dimensional nanotubes/nanowires or advanced molecular electronics.

DNA nanotechnology is the design and manufacture of artificial nucleic acid structures for technological uses. In this field, nucleic acids are used as non-biological engineering materials for nanotechnology rather than as the carriers of genetic information in living cells. Researchers in the field have created static structures such as two- and three-dimensional crystal lattices, nanotubes, polyhedra, and arbitrary shapes, and functional devices such as molecular machines and DNA computers. The field is beginning to be used as a tool to solve basic science problems in structural biology and biophysics, including applications in X-ray crystallography and nuclear magnetic resonance spectroscopy of proteins to determine structures. Potential applications in molecular scale electronics and nanomedicine are also being investigated.

Mark C. Hersam is a professor of Chemistry and Materials Science Engineering at Northwestern University (2000–present) who, according to the National Science Foundation, has made "major breakthrough[s]" in the field of nanotechnology. He is a 2014 recipient of the MacArthur "Genius" Award and a 1996 Marshall Scholar. He is also an Associate Editor of ACS Nano.

MEMS for in situ mechanical characterization refers to microfabricated systems (lab-on-a-chip) used to measure the mechanical properties of nanoscale specimens such as nanowires, nanorods, whiskers, nanotubes and thin films. They distinguish themselves from other methods of nanomechanical testing because the sensing and actuation mechanisms are embedded and/or co-fabricated in the microsystem, providing — in the majority of cases— greater sensitivity and precision.

Mark S. Lundstrom is an American electrical engineering researcher, educator, and author. He is known for contributions to the theory, modeling, and understanding of semiconductor devices, especially nanoscale transistors, and as the creator of the nanoHUB, a major online resource for nanotechnology. Lundstrom is Don and Carol Scifres Distinguished Professor of Electrical and Computer Engineering and acting dean of the College of Engineering at Purdue University.

Carla Molteni is an Italian Professor of Physics at King's College London. She works on computer simulations of materials and biomolecules.

Nanoinformatics is the application of informatics to nanotechnology. It is an interdisciplinary field that develops methods and software tools for understanding nanomaterials, their properties, and their interactions with biological entities, and using that information more efficiently. It differs from cheminformatics in that nanomaterials usually involve nonuniform collections of particles that have distributions of physical properties that must be specified. The nanoinformatics infrastructure includes ontologies for nanomaterials, file formats, and data repositories.

Michele Vendruscolo is an Italian British physicist working in the UK, noted for his theoretical and experimental work on protein folding, misfolding and aggregation.

Yi Cui is a Chinese-American materials scientist, specializing in nanotechnology, and energy and environment-related research. Cui is a Professor of Materials Science and Engineering, and by courtesy, of Chemistry at Stanford University. He is also a faculty member of Stanford Photon Science of SLAC and a Senior Fellow at the Precourt Institute for Energy. He is a Fellow of Materials Research Society (MRS), Electrochemical Society (ECS), and the Royal Society of Chemistry (RSC). He is a co-director of the Bay Area Photovoltaics Consortium, the Battery500 Consortium, and the StorageX initiative. He has been one of the world's most-cited researchers and most influential scientific minds. He has published over 480 research papers with an H-index of 195. He currently serves as an associate editor of Nano Letters from ACS Publications.