Master of the Jewel Office 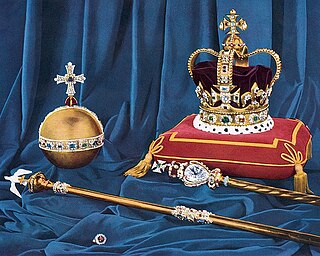 The Crown Jewels of the United Kingdom, originally the Crown Jewels of England, are 142 royal ceremonial objects kept in the Tower of London, which include the regalia and vestments worn at their coronations by British kings and queens.

Curtana, also known as the Sword of Mercy, is a ceremonial sword used at the coronation of British kings and queens. One of the Crown Jewels of the United Kingdom, its end is blunt and squared to symbolise mercy. The current sword is a copy made in the 17th century. The original is thought to be the same as the unnamed regalia sword purported to be Tristan's sword. The claim of Curtana being the sword of Edward the Confessor is probably spurious. 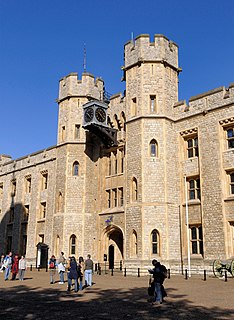 The Jewel House is a vault housing the British Crown Jewels in the Waterloo Block at the Tower of London. It was opened by Queen Elizabeth II in 1994 and refurbished in 2012. Regalia have been kept in various parts of the Tower since the 14th century after a series of successful and attempted thefts at Westminster Abbey. 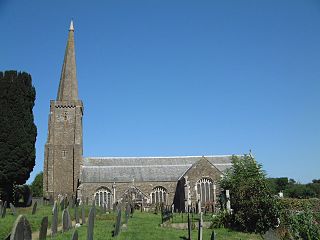 Holbeton is a civil parish and village located 9 miles south east of Plymouth in the South Hams district of Devon, England. Historically it formed part of Ermington Hundred. To the east of the village is an Iron Age enclosure or hill fort known as Holbury. 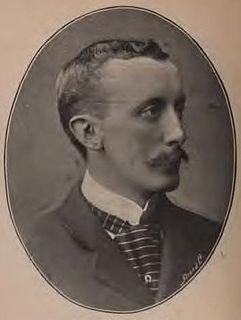 Anthony Mildmay was an English courtier and politician who sat in the House of Commons in 1640. He waited on King Charles during his imprisonment and had care of two of his children after the King's execution.

John Crocker Bulteel (1793–1843) of Fleet, Holbeton, in South Devon, was a Whig MP for South Devon 1832-4 and was Sheriff of Devon in 1841. He was Master of the Dartmoor Foxhounds and bred the finest pack of hounds in England.

The Crown Jeweller is a member of the Royal Household appointed by the British monarch. He or she is responsible for the maintenance and, when they leave the Tower of London, security of the regalia and plate that make up the Crown Jewels of the United Kingdom.

John Elvet was an English priest in the late 14th and early 15th centuries.

John Legbourne was an English priest in the early 15th century.