Mario Angelo S Constantinou (born 1 May 1987), [2] [3] professionally known as Matt Di Angelo, is a British actor and singer, best known for his role as Dean Wicks in the BBC soap opera EastEnders . He also starred as Sean Kennedy in the BBC drama series Hustle . [4]

Di Angelo was born in Enfield, London, England, to parents of Greek and Irish descent. He attended Southgate School, and started studying acting, singing and dancing at Boden Studios (Enfield/Barnet), and went on to Sylvia Young Theatre School.[ citation needed ]

Di Angelo's first acting role was as Robbie in the television series Harbour Lights in the episode: "Rites of Passage" which first aired on 28 May 2000. Then he played Felix in the CBBC musical comedy series I Dream in 2004. This resulted in him making a few appearances in the Sunday morning children's TV show Smile . He appeared in the film Telling Lies in 2006.

That same year he got his best-known role as Deano Wicks in the popular BBC soap opera EastEnders where he made his first appearance on 2 January 2006. It was announced on 18 August 2007 that Di Angelo would be leaving EastEnders following the departure of Phil Daniels (who played his on-screen stepfather Kevin Wicks). He described his departure as "a shock". [5] Di Angelo finished filming EastEnders 12 December 2007 and his last appearance in the series aired on 7 February 2008.

Di Angelo's portfolio includes television commercials and modelling, and he has been a guest on a number of programmes, such as The Paul O'Grady Show , Saturday Kitchen , Ready Steady Cook , Hole in the Wall , Alan Carr's Celebrity Ding Dong , Weakest Link and The Friday Night Project .

He played Sean from series 5 to 8 of the 2009 series of the hit BBC1 series, Hustle. He played Fitz Kreiner in the Doctor Who audio play The Company of Friends.

In 2008, Di Angelo confirmed on Something for the Weekend his participation in the upcoming film Function at the Junction. However, this has yet to happen. [ citation needed ]

On 20 April 2009, Di Angelo's agent announced on their website [7] that he would be filming a guest lead in Casualty. This will be the series two-part finale 'No Fjords in Finland' which is due to air on Saturday 25 July and Saturday 1 August 2009. The agent advised that he was busy recording a new pilot show called Fried Brain Sandwich about a stand up comedian, to be directed by Guy Jenkin ( Outnumbered and Drop the Dead Donkey ).

On 21 July 2009, Di Angelo's agent announced on their website that he would be playing the lead role of Jack Stradler in the low-budget film Following Footsteps. He films throughout August for Perry Pictures. [8]

Di Angelo is a supporter of the 'Connected to British Films and TV Campaign' urging internet users to pay for their downloads.

In May 2010 Di Angelo was filming Whiskey Robber for Parallel Pictures and series 7 of Hustle. [10]

More recently, Di Angelo was cast as the voice-over for the Giffgaff advert, sponsoring The Big Bang Theory on E4, which aired between February and May 2012.[ citation needed ]

In 2007, Di Angelo competed as a contestant in series 5 of Strictly Come Dancing , where he was partnered with professional dancer Flavia Cacace. He and Cacace finished the competition as the runners-up, losing to Alesha Dixon and Matthew Cutler. They later competed in the 2007 Christmas special of the show, landing in third place.

They also competed together in the Strictly Come Dancing live arena tour from January to February 2008, and had won more shows than any other couple by coming first overall sixteen times and second ten times. [15]

Marc Warren is an English actor, known for his British television roles. His roles have included Albert Blithe in Band of Brothers, Danny Blue in Hustle, Dougie Raymond in The Vice, Dominic Foy in State of Play, Rick in Mad Dogs, the Comte de Rochefort in The Musketeers and the Gentleman in Jonathan Strange & Mr Norrell.

Hustle is a British television crime drama series starring Adrian Lester, Robert Glenister and Robert Vaughn. Created by Tony Jordan, it was produced by Kudos Film and Television, and broadcast on BBC One in the United Kingdom. The show premiered on 24 February 2004, and ran for eight series, with its final episode aired on 17 February 2012. The show's premise is on a group of con artists who specialise in "long cons" – extended forms of deceptive frauds that require greater commitment, but offer higher rewards than simple confidence tricks. The show's most notable qualities are plots that involve behind-the-scenes action that the viewers are unaware of until near the end of an episode, along with fantasy scenes and occasional breaches of the fourth wall by the main actors.

Letitia Jane Dean is an English actress and singer. She is known for her portrayal of Sharon Watts in the BBC soap opera, EastEnders. An original cast member from 1985 to 1995, she reprised the role from 2001 to 2006, and again from 2012.

Louisa Claire Lytton is an English actress. She is known for her roles as Ruby Allen in EastEnders and Beth Green in The Bill. She also finished fourth in the fourth series of Strictly Come Dancing in 2006 and represented the UK at the Eurovision Dance Contest 2008, finishing ninth. Her theatre credits include playing Betty Rizzo in the 2017 UK touring production of the musical Grease.

Karl Howman is an English actor and voice-over artist. He is known for his role in the BBC television soap opera EastEnders as Buster Briggs which he played from 2014 to 2016 and for the comedy sitcom Brush Strokes. He also appeared in ‘’Get Some In’’ as Jakey Smith (1978)

Dean Wicks is a fictional character from the BBC soap opera EastEnders played by Matt Di Angelo. He made his first appearance on 2 January 2006. It was announced on 18 August 2007 that the characters of Deano and his sister Carly Wicks were being axed by executive producer Diederick Santer. Deano made his final appearance on 7 February 2008. On 15 January 2014, it was announced that Deano, now called Dean, would be returning and Di Angelo would begin filming the following month. Di Angelo took a three-month break from the soap from January to April 2015, with a one-off appearance in February to tie in with the show's 30th anniversary celebrations. In October 2015, it was announced that Di Angelo would be leaving the show in early 2016. The character is arrested for attempted rape with his final scenes set in court airing on 4 and 5 February 2016. On 19 August 2016, Dean is acquitted of attempted rape after standing trial off-screen. 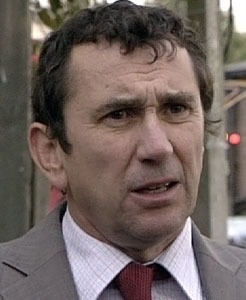 Kevin Wicks is a fictional character from the BBC soap opera EastEnders, played by Phil Daniels. Kevin made his first appearance on 17 February 2006 when he was introduced onto the show alongside his two children Carly and Deano, and is introduced as the nephew of long running character of Pat Butcher. Kevin, a wheeler dealer, is described as caring, sensitive and a cheeky chappy. 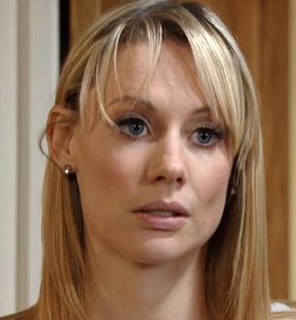 Carly Wicks is a fictional character from the BBC soap opera EastEnders, played by Kellie Shirley, and by Michaela Stephen in a home movie the Wicks family watched on 23 April 2007. She made her first appearance on 17 February 2006. Carly was axed from the serial after her on-screen father Kevin quit. Carly is characterised as a tomboy who enjoys an active sex life. One scene sparked complaints from viewers who felt it inappropriate. She is also portrayed as having a dysfunctional relationship with her mother, Shirley Carter. Carly departed on-screen on 4 January 2008, when she goes travelling, an exit storyline that Shirley felt was a fitting end to the character. Shirley reprised her role as Carly on 6 September 2012 for a "short, dramatic storyline" lasting two episodes, thus she departed on 7 September 2012.

Kellie Shirley is an English actress who works in film, television, theatre and radio. She has also co-presented programmes for BBC2 and Channel 5. She is known for her role as Kirsty De La Croix in Sky One comedy series In the Long Run created by Idris Elba. She is also perhaps best known for the role of Carly Wicks in the BBC soap opera EastEnders from 2006 to 2008 following the death of character's father Kevin Wicks. She returned to the soap in September 2012 for a short dramatic storyline. Other notable credits include The Office and the feature films King of Thieves and Wimbledon.

Chelsea Fox is a fictional character from the BBC soap opera EastEnders, played by Tiana Benjamin who first appears in episode 3147, originally broadcast on 5 May 2006. Benjamin was cast in the role and she left her role in the Harry Potter film series to appear in the soap. Chelsea is introduced as part of the all-female Fox family alongside her mother, Denise Fox, and half-sister, Libby Fox. Benjamin announced her departure from the show in April 2010, and she left in episode 4047, originally broadcast on 5 August 2010. 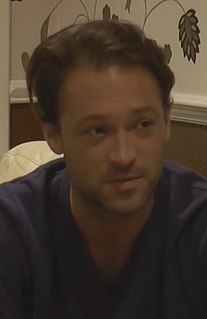 Gerard Paul Greenhalgh, known professionally as Paul Nicholls, is an English actor. He is known for his roles as Joe Wicks in the BBC soap opera EastEnders, DS Sam Casey in the ITV drama Law & Order: UK, and Steve Bell in the Channel 4 drama Ackley Bridge.

Linda Varilis is an English actress. She is known for her roles as Yvonne Atkins in the ITV drama Bad Girls and Shirley Carter in the BBC soap opera EastEnders, a role she has played since 2006. She had previously appeared in EastEnders as the original Lorraine Salter, the mother of Mandy Salter from 1991 to 1992. Her other acting credits include Cracker (1995), Prime Suspect (1997) and Trial & Retribution (1998). She has also appeared in the films Beautiful Thing (1996) and The Business (2005). 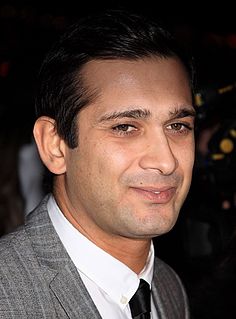 Jimi Mistry is an English actor, known for appearing in numerous films such as East Is East, Blood Diamond, The Guru, 2012, West is West, Ella Enchanted and The Truth About Love. He is also best known for his roles, as Dr Fonseca in BBC1 soap opera EastEnders, Latif in HBO series Strike Back, Kal Nazir in long-running ITV soap opera Coronation Street, and as Tom Bedford in Kay Mellor drama The Syndicate. 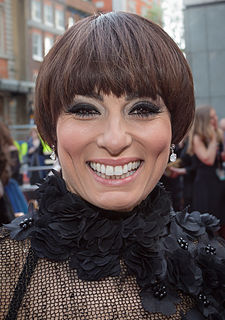 Stephen Marcus is a British actor, best known for his role as Nick the Greek in the film Lock, Stock and Two Smoking Barrels.

Vinnie Monks is a fictional character from the BBC soap opera EastEnders, played by comedian Bobby Davro. He made his first appearance on 8 October 2007. It was announced on 19 July 2008 that Davro quit the show to do other projects. He made his final appearance on 1 December 2008.

Abhin Galeya is a British stage and screen actor. He trained at the Webber Douglas Academy of Dramatic Art and won his first professional role at the National Theatre before he graduated. From there he has steadily worked his way through numerous TV, film and theatre roles.