Mullaloo is a northern coastal suburb of Perth, Western Australia, within the City of Joondalup.

Mullaloo is named after an Aboriginal word, believed to mean "place of the rat kangaroo". It was first recorded in 1919 as Moolalloo Point, but the spelling was later changed to Mullaloo. Urban development began in the late 1950s. [2] 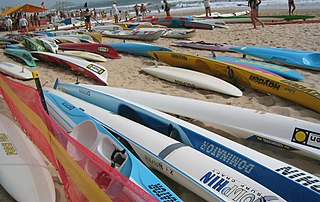 Surf lifesaving is a multifaceted movement that comprises key aspects of voluntary lifeguard services and competitive surf sport. Originating in early 20th century Australia, the movement has expanded globally to other countries including New Zealand, Ireland, South Africa, the United Kingdom. Surf lifesavers in Australia are colloquially known as "Clubbies".

Palm Beach is a suburb in the Northern Beaches region of Sydney, in the state of New South Wales, Australia. Palm Beach is located 41 kilometres (25 mi) north of the Sydney central business district, in the local government area of Northern Beaches Council. Palm Beach sits on a peninsula at the end of Barrenjoey Road, between Pittwater and Broken Bay. The population of Palm Beach was 1,593 as at the 2016 census.

Carrum is a suburb in Melbourne, Victoria, Australia, 33 km (21 mi) south-east from Melbourne's central business district. Its local government area is the City of Kingston. At the 2016 census, Carrum had a population of 3,980. 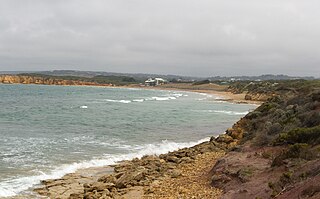 Torquay is a seaside resort in Victoria, Australia, which faces Bass Strait, 21 km south of Geelong and is the gateway to the Great Ocean Road. It is bordered on the west by Spring Creek and its coastal features include Point Danger and Zeally Bay. At the 2016 Census, Torquay had a population of 13,258.

Palm Beach is a coastal suburb in the City of Gold Coast, Queensland, Australia. In the 2016 census, Palm Beach had a population of 14,654 people.

Stockton is a suburb of Newcastle, New South Wales, Australia, located 600 m (0.4 mi) from Newcastle's central business district. It is the only residential suburb of the City of Newcastle that lies north of the Hunter River.

Tamarama is a beachside suburb, eastern suburb of Sydney, in the state of New South Wales, Australia. Tamarama is 6 kilometres east of the Sydney central business district, in the local government area of Waverley Council.

Beldon is a small suburb of Perth, Western Australia, located within the City of Joondalup, to the north of Craigie.

Heathridge is a suburb of Perth, Western Australia, located 33 kilometres (21 mi) south of Yanchep within the City of Joondalup. 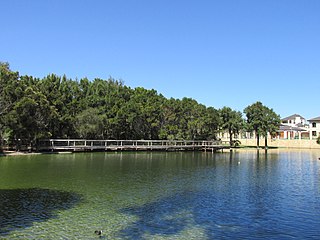 Iluka is a suburb of Perth, Western Australia, within walking distance to the beach. It is located within the City of Joondalup to the north of Perth. Francis Jordan Catholic School is nearby. 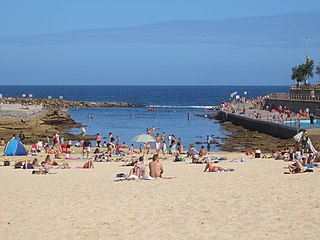 Clovelly is a small beach-side suburb in Sydney's eastern suburbs, in the state of New South Wales, Australia. Clovelly is located 8 kilometres south-east of the Sydney central business district, in the local government area of the City of Randwick, within the Federal Division of Wentworth. 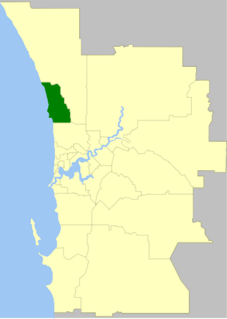 Bilinga is a southern coastal suburb in the City of Gold Coast, Queensland, Australia. In the 2016 census, Bilinga had a population of 1,804 people. It is on the border with New South Wales.

Garie Beach is a patrolled beach in the lower Royal National Park, on the outskirts of southern Sydney, Australia. The beach is one of eleven beaches located within the territory of the Royal National Park. It is also one of three patrolled beaches in the park, with the Garie Surf Life Saving Club patrolling the beach on weekends and Paid lifeguards from ALS Australian Lifeguard Services patrolling on weekdays during the summer school holidays.

Dicky Beach is both a beach and coastal suburb of Caloundra in the Sunshine Coast Region, Queensland, Australia. In the 2016 census, Dicky Beach had a population of 1,895 people.

Ocean Reef Road is an arterial east-west road in Perth, Western Australia. It is located within the northern suburbs of Perth, from Ocean Reef in the west, to Landsdale in the east, with a portion travelling northwards along the coast to Iluka.

Ocean Reef was an electoral district of the Legislative Assembly of Western Australia. It was located in Perth's northern suburbs, and was named after the suburb of Ocean Reef.