The National Library (Polish : Biblioteka Narodowa) is the central Polish library, subject directly to the Ministry of Culture and National Heritage of the Republic of Poland.

The library collects books, journals, electronic and audiovisual publications published in the territory of Poland, as well as Polonica published abroad. It is the most important humanities research library, the main archive of Polish writing and the state centre of bibliographic information about books. It also plays a significant role as a research facility and is an important methodological center for other Polish libraries.

The National Library receives a copy of every book published in Poland as legal deposit. The Jagiellonian Library is the only other library in Poland to have a national library status.

There are three general sections:

The National Library's history has origins in the 18th century (Załuski Library) [2] including items from the collections of John III Sobieski which were obtained from his grand daughter Maria Karolina Sobieska, Duchess of Bouillon. However, the Załuski collection was confiscated by troops of Russian tsarina Catherine II in the aftermath of the second Partition of Poland and sent to Saint Petersburg, where the books formed the mass of the Imperial Public Library on its formation in 1795. [3] [4] [5] Parts of the collection were damaged or destroyed as they were mishandled while being removed from the library and transported to Russia, and many were stolen. [3] [4] According to the historian Joachim Lelewel, the Zaluskis' books, "could be bought at Grodno by the basket". [4]

Because of that, when Poland regained her independence in 1918, there was no central institution to serve in the capacity of a national library. On 24 February 1928, by the decree of president Ignacy Mościcki, the National Library was created in its modern form. [6] It was opened in 1930 and initially had 200 thousand volumes. Its first Director General was Stefan Demby, succeeded in 1934 by Stefan Vrtel-Wierczyński. The collections of the library were rapidly extended. For instance, in 1932 president Mościcki donated all of the books and manuscripts from the Wilanów Palace Museum to the library, some 40 thousand volumes and 20 thousand pictures from the collection of Stanisław Kostka Potocki.

Initially the National Library lacked a seat of its own. Because of that, the collections had to be accommodated in several places. The main reading room was located in the newly built library building of the Warsaw School of Economics. In 1935 the Potocki Palace in Warsaw became home for the special collections. A new, purpose-built building for the library was planned in what is now the Pole Mokotowskie, in a planned monumental "Government District". However, its construction was hampered by the outbreak of World War II.

Before World War II, the library collections consisted of:

In 1940 the Nazi occupants changed the National Library into Municipal Library of Warsaw and divided it as follows:

In 1944 the special collections were set ablaze by the Nazi occupants as a part of repressions after the Warsaw Uprising. [7] This caused the destruction of 80,000 early printed books, including priceless 16th–18th century Polonica, 26,000 manuscripts, 2,500 incunables, 100,000 drawings and engravings, 50,000 pieces of sheet music and theatre materials. [8] It is estimated that out of over six million volumes in Warsaw's major libraries in 1939, 3.6 million volumes were lost during World War II, a large part of them belonging to the National Library. [9] [10]

Today the collections of the National Library are one of the largest in the country. Among 7,900,000 volumes (2004) held in the library are 160,000 objects printed before 1801, over 26,000 manuscripts (including 6,887 music manuscripts), over 114,000 music prints and 400,000 drawings. The library collections also include photographs and other iconographic documents, more than 101,000 atlases and maps, over 2,000,000 ephemera, as well as over 2,000,000 books and about 800,000 copies of journals from the 19th to 21st centuries. Notable items in the collection include 151 leaves of the Codex Suprasliensis , which was inscribed in UNESCO's Memory of the World Programme Register in 2007 in recognition for its supranational and supraregional significance. [11]

In 2012 the library signed an agreement to add 1.3 million Polish library records to WorldCat. [12]

Count Jan Potocki was a Polish nobleman, Polish Army Captain of Engineers, ethnologist, Egyptologist, linguist, traveler, adventurer, and popular author of the Enlightenment period, whose life and exploits made him a legendary figure in his homeland. Outside Poland he is known chiefly for his novel, The Manuscript Found in Saragossa. 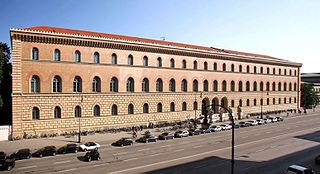 The Bavarian State Library in Munich is the central "Landesbibliothek", i. e. the state library of the Free State of Bavaria, the biggest universal and research library in Germany and one of Europe's most important universal libraries. With its collections currently comprising around 10.89 million books, it ranks among the best research libraries worldwide. Moreover, its historical stock encompasses one of the most important manuscript collections of the world, the largest collection of incunabula worldwide, as well as numerous further important special collections.

The National Library of Russia in Saint Petersburg, is not only the oldest public library in the nation, but also the first national library in the country. The NLR is currently ranked among the world’s major libraries. It has the second richest library collection in the Russian Federation, a treasury of national heritage, and is the All-Russian Information, Research and Cultural Center. Over the course of its history, the Library has aimed for comprehensive acquisition of the national printed output and has provided free access to its collections. It should not be confused with the Russian State Library, located in Moscow. 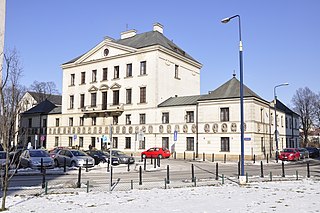 The Załuski Library was built in Warsaw in 1747–1795 by Józef Andrzej Załuski and his brother, Andrzej Stanisław Załuski, both Roman Catholic bishops. The library was the first Polish public library, the largest library in Poland, and one of the earliest public libraries in Europe. 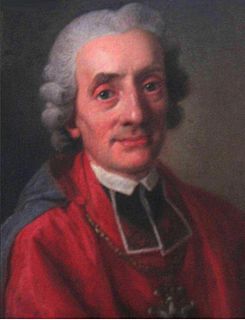 John Baptist Albertrandi was a Polish Jesuit, bishop and historian of Italian extraction, born in Warsaw. 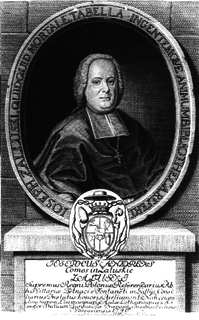 Józef Andrzej Załuski was a Polish Catholic priest, Bishop of Kiev, a sponsor of learning and culture, and a renowned bibliophile. A member of the Polish nobility (szlachta), bearing the hereditary Junosza coat-of-arms, he is most famous as co-founder of the Załuski Library, one of the largest 18th-century book collections in the world.

Andrzej Stanisław Kostka Załuski was a priest (bishop) in the Polish-Lithuanian Commonwealth.

The Krasiński Palace, also known as the Palace of the Commonwealth, is a reconstructed Baroque palace in Warsaw, Poland, on Krasiński Square. Initially erected between 1677 and 1683 for the powerful Krasiński family, it was heavily damaged during World War II and rebuilt in the mid-20th century.

The Warsaw Society of Friends of Science was one of the earliest Polish scientific societies, active in Warsaw from 1800 to 1832.

Jagiellonian Library is the library of the Jagiellonian University in Kraków and with almost 6.7 million volumes, one of the largest libraries in Poland, serving as a public library, university library and part of the Polish national library system. It has a large collection of medieval manuscripts, for example Copernicus' De Revolutionibus and Jan Długosz's Banderia Prutenorum, and a large collection of underground literature from the period of communist rule in Poland (1945–1989). The Jagiellonian also houses the Berlinka art collection, whose legal status is in dispute with Germany.

The destruction of Warsaw was Nazi Germany's substantially-effected razing of the city in late 1944, after the 1944 Warsaw Uprising of the Polish resistance. The uprising infuriated German leaders, who decided to destroy the city as retribution.

The Berlinka ('Berliner'), also Pruski skarb, is the Polish name for a collection of German original manuscripts originally kept at the Prussian State Library in Berlin, which since the end of World War II are held by the Jagiellonian Library in Kraków. The legal status of the documents is subject of an ongoing debate.

The Polish Museum, Rapperswil, was founded in Rapperswil, Switzerland, on 23 October 1870, by Polish Count Władysław Broel-Plater, at the urging of Agaton Giller, as "a refuge for [Poland's] historic memorabilia dishonored and plundered in the [occupied Polish] homeland" and for the promotion of Polish interests.

Warsaw Public Library is one of the main libraries in Warsaw, and one of the largest in Poland. 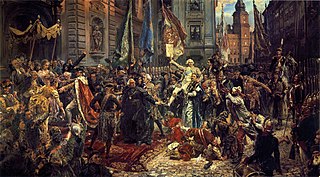 Zgromadzenie Przyjaciół Konstytucji Rządowej was the first modern Polish political party, formed in May 1791, shortly after the adoption of the Constitution of May 3, 1791, by the efforts of the Patriotic Party. The purpose of the Friends of the Constitution was to defend the reformed political system and to introduce further reforms. 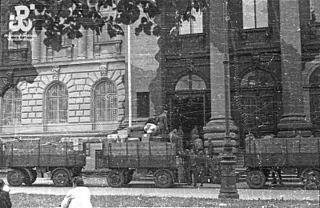 The looting of Polish cultural artifacts and industrial infrastructure during World War II was carried out by Nazi Germany and the Soviet Union simultaneously after the invasion of Poland of 1939. A significant portion of Poland's cultural heritage, estimated at about half a million art objects, was plundered by the occupying powers. Catalogued pieces are still occasionally recovered elsewhere in the world and returned to Poland. 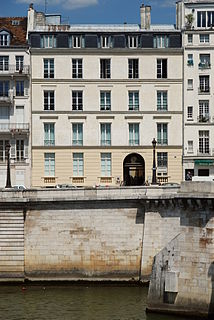 The Polish Library in Paris is a Polish cultural centre of national importance and is closely associated both with the historic Great Emigration of the Polish élite to Paris in the 19th-century and the formation in 1832 of the Literary Society, later the Historical and Literary Society. The Library was founded in 1838 by Adam Jerzy Czartoryski, Julian Ursyn Niemcewicz and Karol Sienkiewicz, among others. Its first task was to safeguard all surviving books, documents, archives and treasures of national significance. It has become a historical and documentary resource open for the use of Poles and other researchers and visitors. The Library houses three museums related to significant Polish artists: the Salon Frédéric Chopin, the Adam Mickiewicz Museum and the Bolesław Biegas Art collection. UNESCO's Memory of the World Register rates it as an institution unique of its kind.

Polona – Polish digital library, which provides digitized books, magazines, graphics, maps, music, fliers and manuscripts from collections of the National Library of Poland and co-operating institutions. It begun its operation in 2006 .