Oceanpress (Portuguese meaning "The Week") is a weekly newspaper published in the island of Sal, Cape Verde and is headquartered in Santa Maria. It is the only newspaper in Sal. Its slogan includes Noticias de Cabo Verde which also features national stories on paper and online. 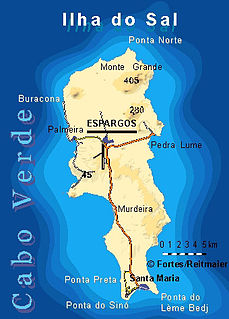 Sal is an island in Cape Verde. It belongs to the northern group of islands, called Barlavento ("windwards"), and comprises a single administrative division, the municipality of Sal. Its seat is the city of Espargos.

Oceanpress features top stories as well as sports from the island and across and outside the archipelago, weather, businesses, arts and entertainment and more, from the island as well as from Cape Verde. It features pages about news stories, newspaper pictures and sports online. [1]

The Barlavento Islands is the northern island group of the Cape Verde archipelago. It can be divided into two sub-groups: 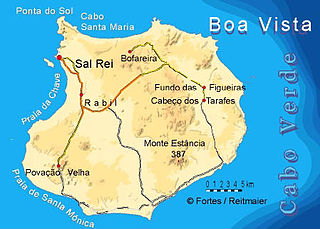 Estádio Marcelo Leitão is a multi-use stadium in Sal Island, Cape Verde. It is used mostly for football matches and now track and field and has a capacity of 8,000 people. It is named for Marcelo Leitão, one of the two main features on the island, the other is a square located in Santa Maria. The stadium is owned by the municipality of Sal and still does as the municipality has yet to split into two. The stadium are operated by the Sal Regional Football (Soccer) and Athletic associations. It is the home stadium of Espargos teams, Académico do Aeroporto and others based in a neighborhood Juventude and recently Chã de Matias, Gaviões, Jovens Unidos of Ribeira Funda and Pretória, it is also home to the island's club Académica do Sal. The ground is made of artificial grass, its area is 105 x 68 meters. Its location is south of the road connecting the east of the city with the road encircling most of the city. The stadium also had recently constructed parking lots.

Futebol Clube Juventude is a football (soccer) club that had played in the Premier division and plays in the Sal Island League in Cape Verde. It is based in the subdivision of Morro de Cural in the city of Espargos in the island of Sal. Juventude is the fifth successful football (soccer) club on the island, having won 7 official regional titles. As of the 2016-17 season, its chairman is David Brito and its coach is Djulhiano Santos.

Jornal o Cidadão is a weekly newspaper published in Mindelo, in the island of São Vicente, Cape Verde. It is one of the most important newspapers in Cape Verde. It was founded in 1988.

Cape Verde is a small archipelagic nation that lacks resources and has experienced severe droughts. Agriculture is made difficult by lack of rain and is restricted to only four islands for most of the year. Most of the nation's GDP comes from the service industry. Cape Verde's economy has been steadily growing since the late 1990s, and it is now officially considered a country of average development, being only the second African country to have achieved such transition, after Botswana in 1994. Cape Verde has significant cooperation with Portugal at every level of the economy, which has led it to link its currency first to the Portuguese escudo and, in 1999, to the euro.

The following lists events that happened during 2014 in Cape Verde. 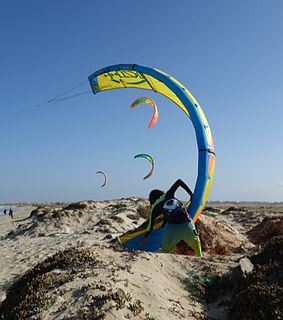 The island of Sal in Cape Verde in the east of the Barlavento Islands is home to several teams and clubs. The major professional club may now be Académico do Aeroporto do Sal, the remaining clubs are amateur or beginners. In 1976, Sal would have its own island championships of each sport. The football competition was the third along with Fogo to have its own first held in 1976 after the nation's independence. Since 2014, the football (soccer) was the only competition divided into two divisions.