Yearwood was born in Trinidad to Edward Yearwood, a well-known composer and mother Mairoon Ali, a Trinidadian actress, radio personality and teacher. He established himself as a Soca talent early on when he entered and won multiple talent shows while still in his teens, including the national Junior Calypso Monarch competition. [1] His shot to global fame when he won Trinidad's famous Soca Groovy Monarch/International Soca Monarch in 2015, performing his blockbuster single "Ola." [2] He is the last International Groovy Soca Monarch champion, as the competition's format was changed in 2016 to exclude that category.

Yearwood was featured in The Fader Magazine as the face of Afrosoca music, an emerging genre that fuses Soca and Afrobeats. [3] He sees the release of his debut international album 'Awakening' on July 1, 2016, from FOX FUSE - the world's largest label for soca music. [4]

In September 2018, Yearwood was featured as a contestant on The X Factor UK (Series 15). During his audition, a technical glitch resulted in the wrong backing track initially being played, [5] however, once fixed, accompanied by two backup dancers, he went on to sing his original song called "Bodyline". [6] His performance eventually resulted in a standing ovation from all four judges and, thus, four "yeses" allowing him to proceed to the next round. [5] He made it to the live shows, and performed another bespoke song, "Jiggle It", but became the first act to be eliminated, finishing in 16th place.

Adesh Samaroo is a Trinidadian chutney soca singer born in Tacarigua in central Trinidad. He gained notice on the local scene in late 2002 with his song "Rum Till I Die" from the album of the same name.

Rikki Jai is an Indo-Trinidadian chutney and chutney-soca musician.

Ravi Bissambhar, also known as Ravi B, is a Trinidadian chutney musician. 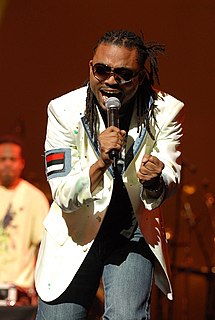 Machel Montano is a Trinidadian soca singer, actor, record producer and songwriter. Known for his high energy, fast-paced, and often unpredictable on-stage performances, he is one of the genre’s most popular artists in the world.

Shurwayne Winchester is a Tobagonian soca musician from The Republic of Trinidad and Tobago, who has twice won the Road March title.

Kes is a Caribbean soca group formed in 2005 and known for their unique blend of soulful vocals, calypso inspired melodies, rock riffs and island beats, with hints of reggae. The band hails from the twin island Republic of Trinidad and Tobago and consists of founding members, brothers Kees Dieffenthaller, Hans Dieffenthaller (drums), and Jon Dieffenthaller (guitar), along with long-time friend Riad Boochoon. Kes’ style has elevated them to mainstream popularity, allowing Kes to become a household name in their country and throughout the Caribbean circuit. The band constantly captivates and wins over their audiences, with their electric and high-energy performances. 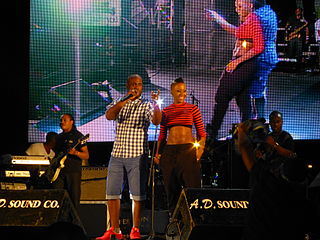 Ian Antonio Alvarez, better known by his stage name Bunji Garlin, is a Trinidadian ragga soca artist. He is also affectionately known as the Viking of Soca. 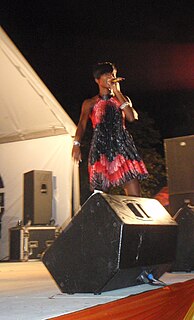 Patrice Roberts is a Trinidadian soca singer. She currently performs alongside popular fellow soca artist Machel Montano in his band, Machel Montano HD. She is also a second cousin of singer Bunji Garlin.

Fay-Ann Lyons-Alvarez is a Trinidadian soca recording artist and songwriter. She is also known by the stage names Lyon Empress, Mane the Matriarch, and the Silver Surfer, a nickname which she claimed during her performance at the 2008 International Soca Monarch. Personally she's married to Bunji Garlin.

International Soca Monarch is an annual soca music competition/fete event, the finals of which are held on every Carnival Friday in Trinidad and Tobago. Contestants in the event vie for two separate crowns or titles, the International Soca Monarch for uptempo songs, and Groovy Soca Monarch for slower-paced songs. Between 2016 and 2018 a change in format meant that contestants vied for only one award but this one category changed was reversed in 2019. In 2016 an additional award was added, called the People's Choice, then subsequently removed, which involves text message voting by Digicel subscribers. Subscribers could have voted multiple times for their favorite artist during the competition and the artist who received the most votes was given an additional cash prize. The International Soca Monarch competition has become the mecca event for soca artists in Trinidad and Tobago (T&T) where the event has been hosted since its inception; and also the rest of the Caribbean region, as many artists who have competed on its stage have moved on to successful soca careers. Dubbed the "Super Bowl of soca music" it is a highly anticipated and well-attended event that has been graced with internationally acclaimed recording artists such as SuperBlue, Machel Montano, Fay Ann Lyons Superblue's daughter and Bunji Garlin's wife, Kevin Lyttle, Rupee and Fay-Ann's husband Bunji Garlin.

Mairoon Ali was a Trinidadian actress and comedian. She frequently appeared in local theatre for almost twenty years. She was also a history teacher, who retired from Holy Name Convent after 34 years.

Lil Bitts is a soca musician from Trinidad and Tobago. She is best known for her hits "Bump", "Crush" and "Hold Meh".

Rhona Fox is an American businesswoman of Indo-Guyanese descent who founded the soca music record label Fox Fuse. Fox was born in Essequibo, Guyana, raised in Nassau, Bahamas, and is based in New York City.

Erphaan Alves is a Trinidadian soca recording artist and songwriter. He initially gained full recognition in the soca world 2012 when he qualified as a finalist in both Groovy and International Power Soca Monarch Finals with the songs "In your Eyes" and "Terrible". His transition to soca megastar proved complete when he cued the HD band into his 2018 monster hit ‘Overdue’.

Afrobeats, also known as Afro-pop, Afro-fusion, is an umbrella term to describe popular music from West Africa and the diaspora that initially developed in Nigeria, Ghana, and the UK in the 2000s and 2010s. Afrobeats is less of a style per se, and more of a descriptor for the fusion of sounds flowing out of Ghana and Nigeria. Genres such as hiplife, jùjú music, highlife and naija beats, among others, were amalgamated under the 'afrobeats' umbrella.