5 After Midnight, also known as 5AM, are a British boy band formed in 2016 during the thirteenth series of The X Factor , finishing in 3rd place. [1] Their debut single, "Up in Here" peaked at 51 on the UK Singles Chart. [2]

The group took part in the thirteenth series of the UK version of The X Factor . They competed in the "Groups" category mentored by Louis Walsh. In the finals, the group duetted with Louisa Johnson, where they performed hit single Tears. Eventually, they finished as the second runners-up, being defeated by Matt Terry and Saara Aalto.

In 2017, they released their debut single "Up in Here". [3] Subsequently, the trio released their first extended play, The Sauce, featuring a total of 4 tracks. [4]

With the limited success that the band had, they were dropped by Simon Cowell's record label Syco. [5]

The Official Finnish Charts are national record charts in Finland compiled and published by Musiikkituottajat – IFPI Finland. The name Suomen virallinen lista/Finlands officiella lista, which is singular in both Finnish and Swedish, is used generically to refer to both the albums and the singles chart, and the context reveals which chart is meant. 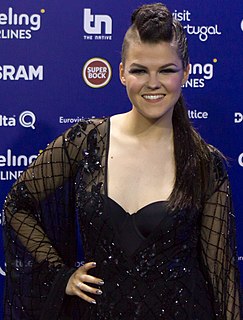 Eveliina Tammenlaakso, better known as simply Evelina, is a Finnish singer and songwriter. She is signed to the Universal Music Group label M-Eazy Music.

The solo discography of Finnish singer-songwriter and musician Ville Valo consists of one studio album, two video game soundtracks, four singles and three music videos. He has also been featured on four singles by other artists, and made contributions to numerous other releases.