"Many of Horror" is an alternative rock song written by Simon Neil of Scottish band Biffy Clyro for their fifth studio album Only Revolutions . The song was released as the fourth single from the album on 18 January 2010. [1] The song was recorded at Ocean Way Recording, Hollywood, California and mastered at Masterdisk. [2] The lyrics of the song concern Neil's wife and family. Jacknife Lee, who previously remixed "Silhouettes" for the Biffy Clyro and Sucioperro side project Marmaduke Duke, recorded a remix for the song.

Matt Cardle, winner of the 2010 series of The X Factor, recorded a studio version of the song under the title "When We Collide" and released it as his debut single, after having performed it in the final of the competition. Biffy Clyro fans launched an internet campaign to get the original track "Many of Horror" to the festive charts, [3] [4] with fans joining a Facebook campaign urging people to buy Biffy Clyro's original single rather than Cardle's cover version. This resulted in the Biffy Clyro version reaching number 8 in the UK Singles Chart, its highest position ever, and Cardle's version became the UK Christmas number 1.

The song is featured on the deluxe edition soundtrack to the film Transformers: Dark of the Moon and is played during the end credits. It was also used by Sky Sports as the song for their closing montage of their 2014 Ryder Cup coverage on 28 September 2014.[ citation needed ]

Critical reception of "Many of Horror" was generally positive.

Jamie Fullerton of NME called "Many of Horror" a "perfect rock ballad". [5] Tim Newbound of Rock Sound described it as "beautifully serene" and stated it balances out more aggressive songs on the album. [6] Jason Birchmeier of Allmusic described the song as "mellow". [7]

Thom Gibbs of Drowned in Sound was critical of the song, calling it a "so-so ballad" and describing it as "too emo". [8]

The official music video for the song was directed by Andy Morahan. [9]

In 2010, Matt Cardle, the winner of the seventh series of The X Factor , released a cover of "Many of Horror" as his winner's single, [16] although his version was re-titled "When We Collide". [4] It was made available as a digital download on 12 December 2010 shortly after the show had ended. A physical CD single was released on 15 December 2010. [17]

In December 2010, Cardle stated that "I know there are some Biffy fans that are like, 'What have you done to that song?'...It's a great song. I'm hoping that I've done it justice." Referring to the Facebook campaign to make the original version of the song number 1 in the chart, Cardle said, "If that happens then great - it's a great song". [4]

Critical reception of Cardle's version of the song was mostly positive although many reviewers noted they preferred the original version. Nick Levine of Digital Spy praised Cardle's vocals, stating he delivered "the violence-tinged lyrics with an appealing sense of intimacy, navigating the inevitable key change with ease and really smashing it on the final note". [20] Rachael Patan of Femalefirst.com [21] and The Beat Review applauded the song choice with the latter stating "his untimely cover of Biffy Clyro’s 'Many of Horror' is a very clever and risque thing to do and we applaud him for that". [22] Fraser McAlpine of the BBC Chart Blog, was much more negative. He stated, "on the evidence of this song, he sure as hell can't sing." [19] Unrealityshout.com agreed, stating "I actually find it very hard to listen to such a heroically valiant vocal from the Biffy Clyro clan get turned into a whimpering, reedy, falsetto-ridden snoozefest". [23]

The official music video for Cardle's version of the song was also directed by Andy Morahan. [33] 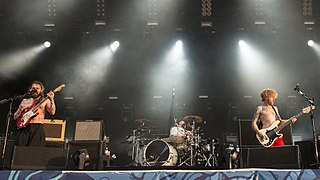 Biffy Clyro are a Scottish rock band that formed in Kilmarnock, East Ayrshire, composed of Simon Neil, James Johnston, and Ben Johnston. Currently signed to 14th Floor Records, they have released eight studio albums, five of which reached the top five in the UK Albums Chart, with their sixth studio album, Opposites claiming their first UK No. 1 album. The latest three consecutive studio albums have all peaked at number one in the UK official albums chart. After their first three albums, the band expanded their following significantly in 2007 with the release of their fourth album, Puzzle, creating more mainstream songs with simpler rhythms and distancing themselves from the more unusual dissonant style present in their previous three albums. Puzzle peaked at No. 2 on the official UK album charts on 16 June 2007. The album went platinum in the UK in 2012, having sold over 300,000 copies.

"Saturday Superhouse" is a song by Biffy Clyro and the first physical single from their fourth album, Puzzle. It was released on 5 March 2007. The band undertook a promotional tour of UK HMV stores to coincide with the release of the single.

"Living Is a Problem Because Everything Dies" is the opening song on Scottish band Biffy Clyro's fourth album, Puzzle. It was released on 14 May 2007, as the second physical single from the album. The song itself, without any B-sides, was released as a digital download on 7 May 2007. 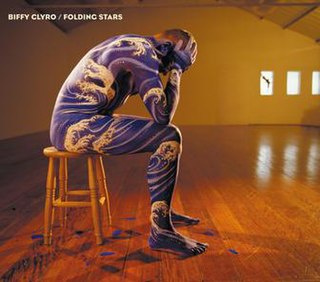 "Folding Stars" is a song by Scottish band Biffy Clyro from their 2007 album, Puzzle. It was released as the third physical single from Puzzle, on 16 July 2007 and reached number 18 on the UK Singles Chart.

"Machines" is a song by Scottish band Biffy Clyro, from their 2007 album, Puzzle. It was due to be released as the fourth physical single from Puzzle on 1 October 2007 but was pushed back 1 week and released on 8 October 2007. 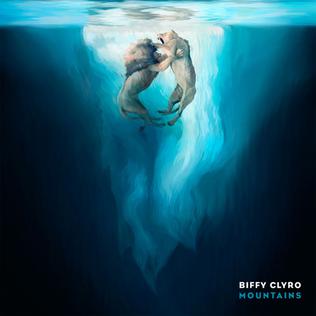 "Mountains" is a single by Scottish band Biffy Clyro, released on 18 August 2008. Originally released as a non-album single, it would later be included on the band's fifth studio album, Only Revolutions. It was originally entitled "Teeth or Mountains" and was first played live at the Electric Festival in Getafe, Spain, on 30 May 2008.

The discography of Biffy Clyro, a Scottish alternative rock band from Ayrshire, consists of eight studio albums, three live albums, seven compilations, one soundtrack, six extended plays (EPs), 42 singles, 36 music videos and six other appearances. Formed in 1995 by vocalist and guitarist Simon Neil, bassist James Johnston and drummer Ben Johnston, Biffy Clyro released their debut EP thekidswhopoptodaywillrocktomorrow in 2000 through Electric Honey, and later signed with Beggars Banquet Records. The band's debut full-length album Blackened Sky was released in 2002, reaching number 25 on the Scottish Albums Chart. The Vertigo of Bliss followed in 2003, with single "Questions and Answers" reaching the top ten of the Scottish Singles Chart. The band's third and final album on Beggars Banquet, Infinity Land, peaked at number 13 in Scotland. "Glitter and Trauma", "My Recovery Injection" and "Only One Word Comes to Mind" all reached the singles chart top ten.

"That Golden Rule" is the second single to be taken from Scottish alternative rock trio Biffy Clyro's fifth studio album, Only Revolutions, released on 23 August 2009. 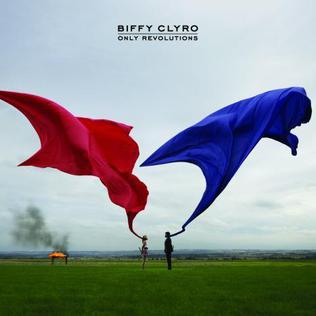 Only Revolutions is the fifth studio album by Scottish alternative rock band Biffy Clyro, released 9 November 2009 on 14th Floor Records. As with its predecessor, Puzzle, the album was produced by Garth Richardson. Upon release, Only Revolutions was a critical and commercial success. The album entered at No. 8 on the UK Album Chart and was then certified gold by the BPI shortly afterwards. It was certified platinum by the BPI in June 2010 for shipments of 300,000 copies in the UK, making it the band's largest selling album. In September 2010, the album achieved a new peak position of No. 3. It was the 26th biggest selling album of 2010 in the UK with sales of 377,900. It was nominated for the 2010 Mercury Prize, which is awarded annually for the best album in the UK or Ireland, and Rock Sound declared it third in its list of the 75 best albums of 2009.

"The Captain" is the third single from Biffy Clyro's fifth studio album, Only Revolutions, released on 26 October 2009. It features a prominent brass section throughout the song. The music video was released on 23 September on NME.com. The B-side "Help Me Be Captain" is an early, more raw sounding, version of the song without brass instruments.

The British music charts are compiled by the Official Charts Company to measure sales of recorded music on compact disc and digital download.

"Bubbles" is the fifth single taken from Scottish rock band Biffy Clyro's fifth studio album, Only Revolutions. Josh Homme from Queens of the Stone Age, Kyuss and Them Crooked Vultures provides additional lead guitar in the song. Despite being one of the lower charting songs from the album, it has spent more weeks in the top 100 than any other Biffy Clyro song. 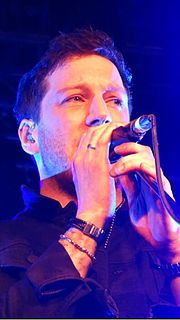 "Lights On" is a song performed by British singer Katy B and serves as the second single from her debut album, On a Mission. It features UK-based R&B singer and rapper Ms. Dynamite. It was released in the United Kingdom on 10 December 2010 as a digital download. It peaked at number 4 on the UK Singles Chart on 26 December 2010. 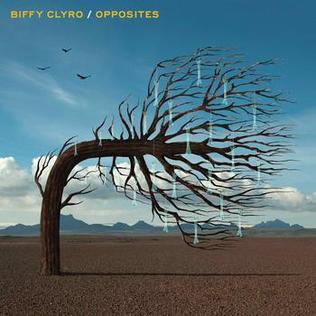 Opposites is the sixth studio album by Scottish alternative rock band Biffy Clyro, which was released on 28 January 2013. A double album, Opposites was originally announced as a pair of albums, The Land at the End of Our Toes and The Sand at the Core of Our Bones, which later became the names of the individual discs of the album. The album features 20 songs across two discs. There is also a single disc version with 14 selected tracks. As of July 2016, the album has sold 260,720 copies in the UK. 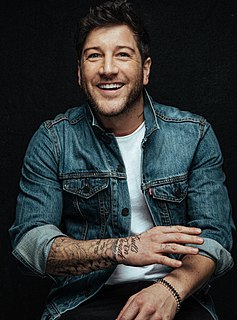