Rachel Adedeji (born 22 August 1991) is an English singer and actress. She finished in ninth place on sixth series of The X Factor in 2009, having previously appeared on the fifth series. From 2016 to 2020, she appeared in the Channel 4 soap opera Hollyoaks as Lisa Loveday.

Adedeji began her career as a singer, beginning singing at the age of eight, later studying musical theater in college. She performed in many musical productions and had a role in the musical Mamma Mia! . [1] In 2008, Adedeji entered the fifth series of The X Factor , where she made it to bootcamp. Adedeji later returned to the programme for the sixth series, where she finished in ninth place. [2]

In 2015, Adedeji married Jason Finnegan; she announced she was pregnant with the pair's first child in 2017, taking maternity leave from Hollyoaks. [10] In 2020, Adedeji took to social media to open up about racism she has encountered while working on the programme. She stated she was told "You're all the same" by a make-up artist, and said that black actresses on Hollyoaks were "forced to drastically change their hair" after being told viewers wouldn't be able to tell them apart, and that in her four years on the soap, she had only worked with one black director. She added: "Working at Hollyoaks is mostly positive, but the experiences I have encountered are a constant reminder of how difficult it is being a black woman in the industry. I am no longer standing for it." [11] A few days later, the soap launched an investigation into her claims, with producers stating that they were "deeply shocked and saddened" by the issues that she had addressed. The investigation included a multi-step action plan to root out any further instances of racism. [12]

Alison Rosamund King is an English actress and model. She is known for her roles as Lynda Block in the Sky One drama series, Dream Team; and Carla Connor in the long-running ITV soap opera, Coronation Street. She won Best Actress at the 2012 British Soap Awards.

Lorraine Stanley is an English actress, known for playing Kelly in the 2006 film London to Brighton and Karen Taylor in the BBC soap opera EastEnders. 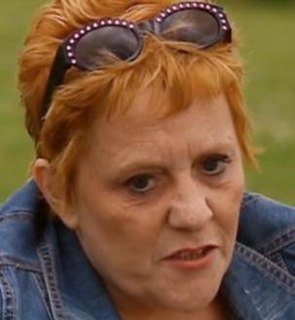 Lizzie Lakely is a fictional character from the British ITV soap opera Emmerdale, played by Kitty McGeever. Lizzie is Emmerdale's first blind character, and was played by a blind actress. She made her first on-screen appearance on 28 April 2009. Lizzie's last appearance was on 28 March 2013. McGeever had health problems, but, in June 2013, producer Kate Oates stated there had been plans for her to return. McGeever died in August 2015, however, without having returned to the series. 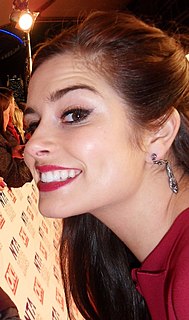 Lorna Laidlaw is an English actress and presenter. She has appeared on television as Mrs Tembe in the BBC medical soap opera Doctors and Aggie Bailey in the ITV soap opera, Coronation Street. Laidlaw won the Royal Television Society award for Best Actress and Best Daytime Star at the Inside Soap Awards for her role in Doctors.

Nadine Rose Mulkerrin is an English actress, known for portraying the role of Cleo McQueen in the Channel 4 soap opera Hollyoaks. For her portrayal of Cleo, she has been nominated for Best Female Dramatic Performance at the British Soap Awards three times.

Joanne Cardsley is a fictional character from the British Channel 4 soap opera, Hollyoaks, played by Rachel Leskovac. The character made her first on-screen appearance on 17 September 2015. Joanne's arrival on-screen was not announced prior to broadcast. It was later reported she had joined the show as a regular cast member. Producer Bryan Kirkwood was glad to cast Leskovac because he admired her previous work as Natasha Blakeman on Coronation Street. Joanne is introduced as an old friend of Simone Loveday. She is characterised as an intelligent and successful solicitor but has a troubled personal life. Driven by loneliness she concocts schemes and behaves in a manipulative manner. The character made her final appearance on 5 December 2016 at the end of Leskovac's one-year contract. 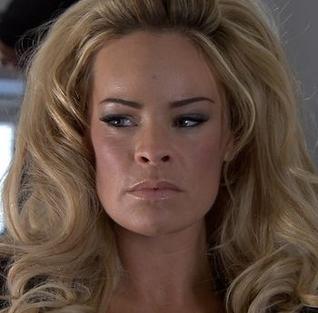 Grace Black is a fictional character from the British Channel 4 soap opera Hollyoaks, played by Tamara Wall. The character made her first on-screen appearance on 8 November 2013. Wall had three auditions for the role on the show's set in Liverpool. The character is introduced as the sister of Clare Devine, who had been killed off in earlier episodes. Grace arrives to investigate her death and get reacquainted with her estranged father Fraser Black.

Zack Loveday is a fictional character from the British Channel 4 soap opera, Hollyoaks, played by Duayne Boachie. The character made his first on-screen appearance on 24 February 2015. The show's producer Bryan Kirkwood had created the Loveday family to reintroduce the "domestic family warmth" it had lost. Billed as a "close-knit family", writers also created a series of secrets they character group would be hiding upon their introduction. The audition process for the role of Zack was long and Boachie had various auditions, call backs and screen tests with other actors. Jacqueline Boatswain and Karl Collins were cast as Zack's parents Simone and Louis Loveday respectively. Zack is characterised as a cheeky and charming person who wants to find love. He is sporty and a keen football player.

Cleo McQueen is a fictional character from the British soap opera Hollyoaks, played by Nadine Rose Mulkerrin. Cleo is a member of the show's established McQueen family and was introduced as the younger sister of Porsche and Celine McQueen, who arrived in late 2014. Actress Jennifer Metcalfe, who plays Mercedes McQueen, suggested that more McQueens should be introduced, as she knew the show was losing two members of the family. Mulkerrin had previously auditioned for the role of Phoebe Jackson, however this role was later given to Mandip Gill. Upon learning she had been cast as Cleo, she gave up her job as a waitress and relocated to Liverpool, where the show is filmed. She made her first appearance during the episode broadcast on 26 January 2015. Mulkerrin took maternity leave from the show in 2019, departing in the episode broadcast on 4 November 2019. She returned on 18 November 2020.