Plagiochila is a large, common, and widespread genus of liverworts in the order Jungermanniales. [1] It is a member of the family Plagiochilaceae within that order. There may be anywhere from 500 to 1300 species, most of them from the tropics; the exact number is still under revision. The genus also has a wide distribution in temperate and arctic areas.

In biology, a monotypic taxon is a taxonomic group (taxon) that contains only one immediately subordinate taxon. A monotypic species is one that does not include subspecies or smaller, infraspecific taxa. In the case of genera, the term "unispecific" or "monospecific" is sometimes preferred. In botanical nomenclature, a monotypic genus is a genus in the special case where a genus and a single species are simultaneously described. In contrast an oligotypic taxon contains more than one but only a very few subordinate taxa. 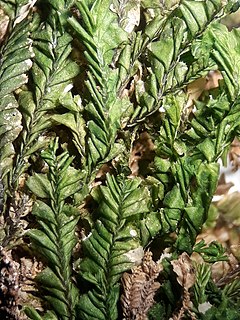 Plagiochila deltoidea is a species of liverwort in the family Plagiochilaceae. It was first described by Lindenb. It is found in New Zealand and Tasmania. It resides on wet ground. It can grow to lengths of up to 60 mm with 3 mm wide leaves.

This is a list of taxa comprising the flora of the Antipodes Islands. It includes some species known as megaherbs.

Plagiochila wolframii is a species of plant in the family Plagiochilaceae. It is endemic to Peru. Its natural habitat is subtropical or tropical moist lowland forests. It is threatened by habitat loss.

Manongarivo Reserve is a wildlife reserve in the North-West of Madagascar in the region of Diana.

Sabatinca chrysargyra is a species of moth belonging to the family Micropterigidae. It was described by Edward Meyrick in 1886 and is endemic to New Zealand. It can can be found from Franz Josef Glacier / Kā Roimata o Hine Hukatere south but only on the western side of the South Island. Adults are on the wing from the beginning of October until the middle of January. Larvae likely feed on foliose liverworts and have been found on species in the genus Plagiochila. The adult moths live in a range of habitats preferring sunny open spaces in forests or snow-tussock grasslands that can range in altitude from near sea level up to 1,230 m. This species is very similar in appearance to Sabatinca aemula and dissection of genitalia is required to distinguish between the two species.

Sabatinca heighwayi is a species of moth belonging to the family Micropterigidae. It was described by Alfred Philpott in 1927 and is endemic to New Zealand. It can be found north of Lewis Pass in the north west of the South Island. Adult moths are on the wing from late September until the middle of January. The host of the larvae of this species is the foliose liverwort Plagiochila circumcincta.

Micraglossa aureata is a moth in the family Crambidae. It was described by Inoue in 1982. It is found in Taiwan and Japan.

The Hexanauplia constitute a class of crustaceans, comprising two groups: the Copepoda and the Tantulocarida. The former subclass Thecostraca was elevated to class rank and removed from Hexanauplia in 2021.

Plagiochila fasciculata is a species of liverwort in the family Plagiochilaceae. Found in eastern Australia and New Zealand in moist sites.

Wilfred "Wilf" Borden Schofield was a Canadian botanist, specializing in mosses and liverworts. He was considered by many "the foremost bryologist in Canada".

Sticta arachnofuliginosa is a species of foliose lichen in the family Peltigeraceae. Found in Central America and South America, it was formally described by Bibiana Moncada and Robert Lücking in 2012. The type specimen was collected near the Laguna de Chisacá at an altitude of 3,734 m (12,251 ft). The lichen, which usually grows on bark but has also been recorded growing on soil, tends to associates with liverworts from the genera Metzgeria, Lepicolea, Plagiochila, as well as the lichen Heterodermia circinalis. It has been recorded from páramo, and temperate forests at elevations ranging from 2,300 and 4,050 m. The specific epithet alludes to its resemblance to Sticta fuliginosa.

Sticta arbuscula is a species of foliose lichen in the family Peltigeraceae. Found in the South American Andes, it was formally described by Bibiana Moncada and Robert Lücking in 2012. The type specimen was collected in Chingaza National Natural Park at an altitude of 3,430 m (11,250 ft). The lichen is found in the Andes of Colombia and Ecuador, at elevations between 3,000 and 3,700 m, where it grows on bark of twigs and stems. It typically associates with bryophytes from the family Lejeuneaceae and the genera Plagiochila, Metzgeria, Jubula, and Omphalanthus. The specific epithet arbuscula refers to the characteristic arbuscular isidia–branched with a stalk at the base.

Sticta rhizinata is a species of foliose lichen in the family Peltigeraceae. Found in Colombia, it was formally described by Bibiana Moncada and Robert Lücking in 2012. It is a member of the Sticta weigelii species complex. The type specimen was collected in Chingaza National Natural Park (Cundinamarca) at an altitude of 3,430 m (11,250 ft). The lichen is only known to occur in the Andes of Colombia at altitudes between 2,300 and 3,720 m. Here it grows on the ground, often associated with bryophytes of the genera Plagiochila, Frullania, Metzgeria, Campylopus, and Dicranum. Frequent lichen associates include Everniastrum, Hypotrachyna, and Peltigera. The specific epithet rhizinata refers to its conspicuous rhizines.

Sticta tunjensis is a species of foliose lichen in the family Peltigeraceae. Found in Colombia, it was formally described by Bibiana Moncada and Robert Lücking in 2012. The type specimen was collected in Barón Germania at an altitude between 3,065–3,085 metres (10,056–10,121 ft). The lichen is only known to occur in the Andes of Colombia at altitudes between 1,900 and 3,080 metres. It has been found growing on both bark and on soil, and it often grows among liverworts in genus Plagiochila. The specific epithet tunjensis refers to the type locality. Sticta tunjensis is somewhat similar to Sticta weigelii in morphological features, but it is phylogenetically distinct.