Power Rangers Operation Overdrive is the fifteenth season of the American television franchise Power Rangers. The season uses footage and other material from the 30th Super Sentai series GoGo Sentai Boukenger , which celebrates the thirtieth anniversary of that franchise. In addition, this season's team-up episode, "Once a Ranger", commemorates the fifteenth anniversary of the Power Rangers franchise. The season premiered on February 26, 2007, [1] on Toon Disney's Jetix programming block. It was the first season to use high definition footage from the Super Sentai franchise, although this footage was scaled down to 4:3 aspect ratio.

Unique among Power Ranger series, Operation Overdrive has the Rangers exploring, operating and fighting in many different countries around the world, rather than focusing only on their home city of San Angeles.

The early working title for the series was Power Rangers Drive Force, but was later changed to "Relic Hunters" and then "Operation Overdrive" [2]

In early pre-production, on July 26, 2006, the series' logo was posted on a fan message board called "Fuñaroboard." [3] This same logo was later featured on the Disney website, RangerSecrets.com, as part of the preview for the series. [4] The logo is very similar to that of the parent series Boukenger in the basic design and format.

On November 14, 2006, Disney had set up its official website for Power Rangers Operation Overdrive. [5]

Five brave, skilled, and adventurous young people are chosen to search for several magical jewels that were long ago taken from the Corona Aurora (literally "Crown of the Dawn"), so as to prevent them from coming into the possession of Moltor and Flurious, who are brothers connected to ice and fire banished long ago by the Corona's guardian for having attempted to steal it. [6] When the billionaire explorer Andrew Hartford discovered the Corona Aurora, they escaped their exile and rallied their allies. In response, Andrew Hartford selected the talented youths and modified their DNA so as to grant them exceptional physical powers by which to combat the evil. Although Moltor and Flurious initially attempted to work together, they soon became rivals. The Corona Aurora fell into Moltor's hands; yet without its jewels, it could not grant the owner universal power. Later, the evil warriors Kamdor and Miratrix began hunting for the jewels, as did the extraterrestrial 'Fearcats'. Now the Rangers, joined by a Mercurian named Tyzonn who joined their ranks as the Mercury Ranger, are forced to fight multiple villains and travel worldwide in the effort to capture the jewels before their enemies can.

In order to accomplish this purpose, the members of Operation Overdrive are equipped with futuristic technology similar to that featured in previous Power Ranger continuities, which improves in sophistication and power with successive episodes. Each time a new Ranger, new weapon, or (in one subplot, if not more) new reason for battle is introduced, that Ranger, weapon, or reason produces the decimation of one major enemy (such as Kamdor and Miratrix) or a host of foot soldiers. Thereafter the odds resume their former state. The physical powers granted by genetic modification are seldom used, seen, or mentioned, except when one or more Rangers is rescued by their use. Throughout the series, legends are included or invented to give a feeling of antiquity: these include Thor's Hammer, Atlantis and Poseidon, who is mentioned under the Roman name, Neptune.

Mighty Morphin Power Rangers is an American superhero television series that premiered on August 28, 1993, on the Fox Kids programming block. It is the first entry of the Power Rangers franchise, and became a 1990s pop culture phenomenon along with a large line of toys, action figures, and other merchandise. The show adapted stock footage from the Japanese TV series Kyōryū Sentai Zyuranger (1992-1993), which was the 16th installment of Toei's Super Sentai franchise. The second and third seasons of the show drew elements and stock footage from Gosei Sentai Dairanger and Ninja Sentai Kakuranger, respectively, though the Zyuranger costumes were still used for the lead cast in these two seasons. Only the mecha and the Kiba Ranger costume from Dairanger were featured in the second season while only the Kakuranger mecha was featured in the third season, though the Kakuranger costumes were later used for the mini-series Mighty Morphin Alien Rangers. The series was produced by MMPR Productions and distributed by Saban Entertainment, while the show's merchandise was produced and distributed by Bandai Entertainment. The series was well known for its campy tone.

Power Rangers S.P.D. is the thirteenth season of the American television series, Power Rangers, and is based on the 28th Super Sentai series Tokusou Sentai Dekaranger. The season shares its title with the Korean dub of Dekaranger in South Korea, whose logo is similar to the American series. The initials in the title stand for "Space Patrol Delta"; in Dekaranger, it stood for Special Police Dekaranger, and in the South Korean dub of Dekaranger, it stood for Special Police Delta. The season debuted on February 5, 2005 as part of Jetix, originally airing on ABC Family; beginning with "Messenger, Part 2", the series moved to Toon Disney.

Power Rangers Mystic Force is the fourteenth season of the American television series Power Rangers, based on the Japanese 29th Super Sentai tokusatsu series. The season premiered on February 20, 2006 as part of the Jetix block on Toon Disney. The season is an adaptation of Mahō Sentai Magiranger, and is the only Disney-produced season to feature the main villain from its Super Sentai counterpart. 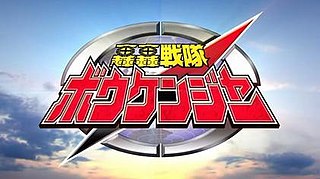 GoGo Sentai Boukenger is the 30th series in Toei's Super Sentai series, a metaseries of Japanese tokusatsu programming. It is the first installment to be broadcast in 16:9 aspect ratio. It premiered on February 19, 2006 at 7:30 JST on TV Asahi's 2006 Super Hero Time programming block with Kamen Rider Kabuto. Its footage was used in the American series, Power Rangers Operation Overdrive in SD, while the original footage was dubbed into Korean for the South Korean series, Power Rangers Treasure Force.

Jackie Marchand is a television writer and producer, she is best known for her work on the children's action/adventure series Power Rangers,

Power Rangers Jungle Fury is the sixteenth season of the American television series Power Rangers, and is an adaptation of Juken Sentai Gekiranger, the thirty-first Japanese Super Sentai series.

Power Rangers RPM is the seventeenth season of the American television series Power Rangers, which uses footage, costumes, and other props from the Super Sentai series. In the case of RPM, the season was an adaptation of Engine Sentai Go-onger, the thirty-second installment of the series.