The Prospero satellite, also known as the X-3, [2] was launched by the United Kingdom in 1971. It was designed to undertake a series of experiments to study the effects of space environment on communications satellites and remained operational until 1973, after which it was contacted annually for over 25 years. [3] Although Prospero was the first British satellite to have been launched successfully by a British rocket, the first British satellite placed in orbit was Ariel 1 , launched in April 1962 on a U.S. rocket.

Prospero was built by the Royal Aircraft Establishment in Farnborough. [3] Initially called Puck, [4] it was designed to conduct experiments to test the technologies necessary for communication satellites. Two experimental solar cells setups were tested. One was a test of a lightweight cell and mounting. [5] The other was an attempt to replace the standard fused silica cover of solar cells with a Cerium oxide-based cover. [5] Designs for telemetry and power systems were also tested. It also carried a micrometeoroid detector, to measure the presence of very small particles. [6] The detector worked on the principle of impact ionisation. [7] When the Ministry of Defence cancelled the Black Arrow programme, the development team decided to continue with the project but renamed the satellite Prospero when it was announced it would be the last launch attempt using a British rocket. [8] [3] [4] An earlier Black Arrow launch, carrying the Orba X-2 satellite, had failed to achieve orbit after a premature second stage shut-down. [9]

Prospero was launched at 04:09  GMT on 28 October 1971, from Launch Area 5B (LA-5B) at Woomera, South Australia, on a Black Arrow rocket, making Britain the sixth nation to place a satellite into orbit using a domestically developed carrier rocket. [10] The Black Arrow's final stage Waxwing rocket also entered orbit, "rather too enthusiastically", as it continued to thrust after separation and collided with Prospero, detaching one of the satellite's four radio antennae. [11]

The satellite was operated from R.A.E Lasham. For the satellite's early orbits additional reporting was provided by the European Space Research Organisation's ESTRACK system. [5] In regular operation real time data support was provided by a Science Research Council station at Port Stanley in the Falkland Islands. [5]

The lightweight solar cell design was found to be successful. [5] The Cerium oxide cover was not, with the solar cell using it showing an increased rate of degradation. [5]

Prospero's tape recorders stopped working in 1973. [12] As was noted in an episode of the BBC television series Coast, radio transmissions from Prospero could still be heard on 137.560 MHz in 2004, [13] though the signals used in the episode would actually come from an Orbcomm satellite, rather than Prospero (as the later Orbcomm used the same 137.560 MHz frequency since Prospero was considered no longer active). Prospero had officially been deactivated in 1996, when the UK's Defence Research Establishment decommissioned their satellite tracking station at Lasham, Hampshire but the satellite had been turned on in past years on its anniversary. It is in a low Earth orbit and is not expected to decay until about 2070, almost 100 years after its launch. [6]

In September 2011 a team at University College London's Mullard Space Science Laboratory announced plans to re-establish communications with Prospero, in time for the satellite's 40th anniversary. [3] As of September 2012, not much progress had been made in establishing contact with the satellite due to time constraints. [14] At perigee, Prospero can be seen through binoculars at magnitude +6 overhead, steady. 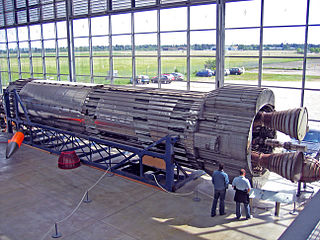 Black Arrow, officially capitalised BLACK ARROW, was a British satellite carrier rocket. Developed during the 1960s, it was used for four launches between 1969 and 1971, all launched from the Woomera Prohibited Area in Australia. Its final flight was the first and only successful orbital launch to be conducted by the United Kingdom, and placed the Prospero satellite into low Earth orbit. 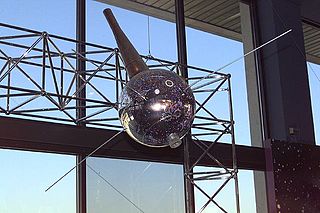 Desmond George King-Hele FRS was a British physicist, poet and author who crossed the divide between the arts and science to write extensively about the life of Erasmus Darwin, whom he linked with the romantic poets Shelley, Wordsworth, and Coleridge. In 1957, together with Doreen Gilmour, and as part of the Guided Weapons department of Royal Aircraft Establishment, he wrote a report proposing the use of the Blue Streak missile and Black Knight as a satellite launcher. See also Blue Streak Satellite Launch Vehicle. 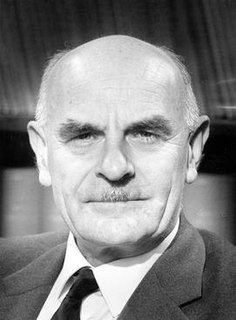 Sir Harrie Stewart Wilson Massey was an Australian mathematical physicist who worked primarily in the fields of atomic and atmospheric physics.

The British space programme is the British government's work to develop British space capabilities. The objectives of the current civil programme are to "win sustainable economic growth, secure new scientific knowledge and provide benefits to all citizens."

Ariel 3 was a satellite in the Ariel programme, a satellite partnership between the US and UK. Three of the onboard experiments continued research from the first two missions and two experiments were designed for new research topics. It was launched from Vandenberg Air Force Base on 5 May 1967, making it the first satellite of the program to launch from the West coast. Ariel 3 was shut down in September 1969, and re-entered the Earth's atmosphere 14 December 1970. 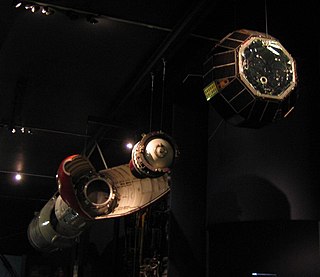 Launch Area 5 (LA5) is an operational site at the RAAF Woomera Test Range which forms the primary operational capability of the Woomera Range Complex. Originally LA5 was a rocket launch site which supported a number of British experimental launches, including the United Kingdom's first, and as of 2019 only, satellite launch. It consisted of three separate launch pads, which supported 22 Black Knight sounding rocket launches, and four Black Arrow carrier rocket launches. Of the four Black Arrow launches, two were orbital launches, the first of which, on 2 September 1970, failed, and the second, on 28 October 1971, succeeded, placing the Prospero satellite into low Earth orbit.

Ariel was a British satellite research programme conducted between the early 1960s and 1980s. Six satellites were launched as part of the programme, starting with the first British satellite, Ariel 1, which was launched on 26 April 1962, and concluding with the launch of Ariel 6 on 2 June 1979. The launch of Ariel 1 made Britain the third country to have a satellite orbiting the Earth. The first four were devoted to studying the ionosphere, the remaining two to X-ray astronomy and cosmic-ray studies.

Orbcomm is a family of low Earth orbit communications satellites, operated by the American satellite communications company Orbcomm. As of July 2014, 51 such satellites have orbited Earth, with 50 still continuing to do so.

Orba, also known as X-2, was intended to be the first satellite launched by a British rocket. It was launched at 00:34 GMT on 2 September 1970, atop a Black Arrow rocket from Launch Area 5B at Woomera, but failed to reach orbit after the second stage of the carrier rocket shut down 13 seconds early. Orba was built from spare parts due to funding restrictions, and was to have been used to measure upper atmosphere density by monitoring the decay of its orbit. 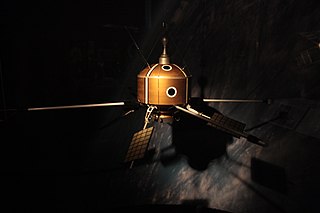 Ariel 1, was the first British satellite, and the first satellite in the Ariel programme. Its launch in 1962 made the United Kingdom the third country to operate a satellite, after the Soviet Union and the United States. It was constructed in both the UK and the United States by NASA Goddard Space Flight Center and SERC, under an agreement reached as the result of political discussions in 1959 and 1960. The US Starfish Prime high-altitude nuclear test affected Ariel 1's operational capability. 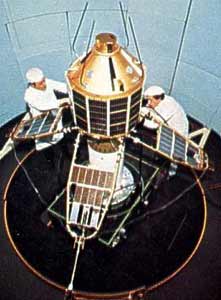 Ariel 4, known pre-launch as UK 4, was a British ionospheric research satellite, which was operated by the Science and Engineering Research Council. It was launched 11 December 1971, aboard an American Scout rocket. Experiments were designed to meet one scientific objective, making it the first mission-oriented satellite for the UK. It was also the first satellite in the Ariel programme to contain an American experiment. Ariel 4 decayed from orbit on 12 December 1978

Space Technology Research Vehicle, or STRV, was a series of British microsatellites which operated in elliptical orbits around the Earth. The satellites were built by the Defence Research Agency at Farnborough, for the UK Ministry of Defence. 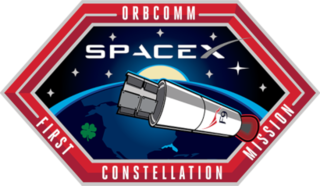 Falcon 9 flight 10 was a Falcon 9 space launch that occurred on July 14, 2014. It was the fifth launch of the Falcon 9 v1.1 launch vehicle and carried six Orbcomm-OG2 telecommunication satellites. All six 172-kilogram-mass (379 lb) satellites were successfully deployed. 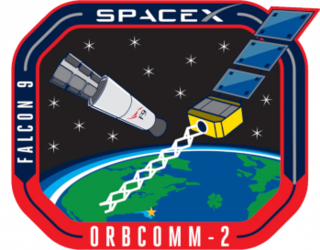 Falcon 9 flight 20 was a Falcon 9 space launch that occurred on 22 December 2015 at 01:29 UTC. It was the first time that the first stage of an orbital rocket made a successful return and vertical landing.

Explorer 13 was an American satellite launched as part of the Explorers program on August 25, 1961 from Wallops Flight Facility, Virginia, U.S.

Explorer 16, also called S-55B, was an American satellite launched as part of the Explorers program. Explorer 16 was launched on December 19, 1962, at Wallops Flight Facility, Virginia, United States, with a Scout rocket.

Explorer 23 was the last of three S-55 micrometeoroid satellites launched as part of NASA's Explorers program. Its purpose was to obtain data on the near-earth meteoroid environment, thus providing an accurate estimate of the probability of penetration in spacecraft structures by meteoroids and allowing a more confident definition of the penetration flux-material thickness relation to be derived.