Last updated June 13, 2022
Angle between a reference plane and the plane of an orbit
"Inclination" redirects here. For other uses, see Inclination (disambiguation).

For a satellite orbiting the Earth directly above the Equator, the plane of the satellite's orbit is the same as the Earth's equatorial plane, and the satellite's orbital inclination is 0°. The general case for a circular orbit is that it is tilted, spending half an orbit over the northern hemisphere and half over the southern. If the orbit swung between 20° north latitude and 20° south latitude, then its orbital inclination would be 20°.

Inclination can instead be measured with respect to another plane, such as the Sun's equator or the invariable plane (the plane that represents the angular momentum of the Solar System, approximately the orbital plane of Jupiter).

An inclination of 30° could also be described using an angle of 150°. The convention is that the normal orbit is prograde, an orbit in the same direction as the planet rotates. Inclinations greater than 90° describe retrograde orbits (backward). Thus:

For impact-generated moons of terrestrial planets not too far from their star, with a large planet–moon distance, the orbital planes of moons tend to be aligned with the planet's orbit around the star due to tides from the star, but if the planet–moon distance is small, it may be inclined. For gas giants, the orbits of moons tend to be aligned with the giant planet's equator, because these formed in circumplanetary disks. [4] Strictly speaking, this applies only to regular satellites. Captured bodies on distant orbits vary widely in their inclinations, while captured bodies in relatively close orbits tend to have low inclinations owing to tidal effects and perturbations by large regular satellites.

The inclination of exoplanets or members of multiple stars is the angle of the plane of the orbit relative to the plane perpendicular to the line of sight from Earth to the object. [5]

Because the radial-velocity method more easily finds planets with orbits closer to edge-on, most exoplanets found by this method have inclinations between 45° and 135°, although in most cases the inclination is not known. Consequently, most exoplanets found by radial velocity have true masses no more than 40% greater than their minimum masses.[ citation needed ] If the orbit is almost face-on, especially for superjovians detected by radial velocity, then those objects may actually be brown dwarfs or even red dwarfs. One particular example is HD 33636 B, which has true mass 142 MJ, corresponding to an M6V star, while its minimum mass was 9.28 MJ.

If the orbit is almost edge-on, then the planet can be seen transiting its star.

In astrodynamics, the inclination

can be computed from the orbital momentum vector

(or any vector perpendicular to the orbital plane) as

is the z-component of

Mutual inclination of two orbits may be calculated from their inclinations to another plane using cosine rule for angles.

Most planetary orbits in the Solar System have relatively small inclinations, both in relation to each other and to the Sun's equator:

On the other hand, the dwarf planets Pluto and Eris have inclinations to the ecliptic of 17° and 44° respectively, and the large asteroid Pallas is inclined at 34°.

In 1966, Peter Goldreich published a classic paper on the evolution of the Moon's orbit and on the orbits of other moons in the solar system. [7] He showed that, for each planet, there is a distance such that moons closer to the planet than that distance maintain an almost constant orbital inclination with respect to the planet's equator (with an orbital precession mostly due to the tidal influence of the planet), whereas moons farther away maintain an almost constant orbital inclination with respect to the ecliptic (with precession due mostly to the tidal influence of the sun). The moons in the first category, with the exception of Neptune's moon Triton, orbit near the equatorial plane. He concluded that these moons formed from equatorial accretion disks. But he found that our moon, although it was once inside the critical distance from the earth, never had an equatorial orbit as would be expected from various scenarios for its origin. This is called the lunar inclination problem, to which various solutions have since been proposed. [8]

For planets and other rotating celestial bodies, the angle of the equatorial plane relative to the orbital plane – such as the tilt of the Earth's poles toward or away from the Sun – is sometimes also called inclination, but less ambiguous terms are axial tilt or obliquity. 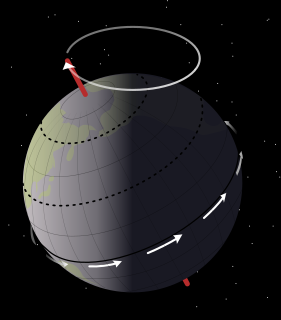 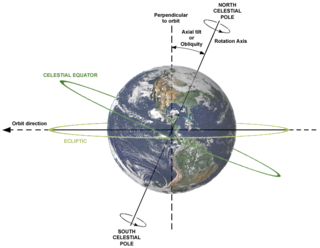 Cassini's laws provide a compact description of the motion of the Moon. They were established in 1693 by Giovanni Domenico Cassini, a prominent scientist of his time. 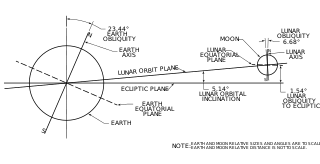 The Moon orbits Earth in the prograde direction and completes one revolution relative to the Vernal Equinox and the stars in about 27.32 days and one revolution relative to the Sun in about 29.53 days. Earth and the Moon orbit about their barycentre, which lies about 4,670 km (2,900 mi) from Earth's centre, forming a satellite system called the Earth–Moon system. On average, the distance to the Moon is about 385,000 km (239,000 mi) from Earth's centre, which corresponds to about 60 Earth radii or 1.282 light-seconds. 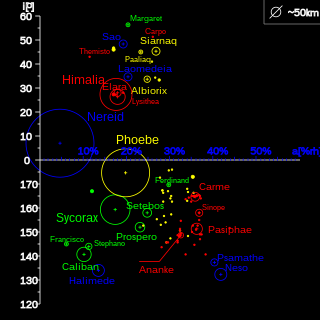 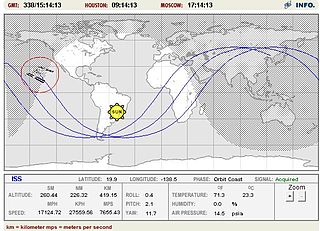