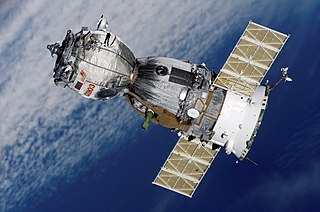 An Earth satellite that is in (a prograde) subsynchronous orbit will appear to drift eastward as seen from the Earth's surface. [1]

The Geosynchronous-belt subsynchronous orbital regime is regularly used in spaceflight. This orbit is typically used to house working communication satellites that have not yet been deactivated, and may be still be used again in geostationary service if the need arises. [2]

A geosynchronous orbit is an orbit around Earth of a satellite with an orbital period that matches Earth's rotation on its axis, which takes one sidereal day. The synchronization of rotation and orbital period means that, for an observer on Earth's surface, an object in geosynchronous orbit returns to exactly the same position in the sky after a period of one sidereal day. Over the course of a day, the object's position in the sky traces out a path, typically in a figure-8 form, whose precise characteristics depend on the orbit's inclination and eccentricity. Satellites are typically launched in an eastward direction. A geosynchronous orbit is 35,786 km (22,236 mi) above the Earth's surface. Those closer to Earth orbit faster than Earth rotates, so from Earth, they appear to move eastward while those that orbit beyond geosynchronous distances appear to move westward.

Spaceflight is ballistic flight into or through outer space. Spaceflight can occur with spacecraft with or without humans on board. Examples of human spaceflight include the U.S. Apollo Moon landing and Space Shuttle programs and the Russian Soyuz program, as well as the ongoing International Space Station. Examples of unmanned spaceflight include space probes that leave Earth orbit, as well as satellites in orbit around Earth, such as communications satellites. These operate either by telerobotic control or are fully autonomous.

A geostationary orbit, often referred to as a geosynchronous equatorial orbit (GEO), is a circular geosynchronous orbit 35,786 km (22,236 mi) above Earth's equator and following the direction of Earth's rotation. An object in such an orbit appears motionless, at a fixed position in the sky, to ground observers. Communications satellites and weather satellites are often placed in geostationary orbits, so that the satellite antennae that communicate with them do not have to rotate to track them, but can be pointed permanently at the position in the sky where the satellites are located. Using this characteristic, ocean-color monitoring satellites with visible and near-infrared light sensors can also be operated in geostationary orbit in order to monitor sensitive changes of ocean environments.

Space technology is technology developed by space science or the aerospace industry for use in spaceflight, satellites, or space exploration. Space technology includes spacecraft, satellites, space stations, and support infrastructure, equipment, and procedures. Space is such a novel environment that attempting to work in it requires new tools and techniques. Many common everyday services such as weather forecasting, remote sensing, GPS systems, satellite television, and some long distance communications systems critically rely on space infrastructure. Of the sciences, astronomy and Earth science benefit from space technology. New technologies originating with or accelerated by space-related endeavours are often subsequently exploited in other economic activities.

A geocentric orbit or Earth orbit involves any object orbiting Planet Earth, such as the Moon or artificial satellites. In 1997 NASA estimated there were approximately 2,465 artificial satellite payloads orbiting the Earth and 6,216 pieces of space debris as tracked by the Goddard Space Flight Center. Over 16,291 previously launched objects have decayed into the Earth's atmosphere.

PAS-22, previously known as AsiaSat 3 and then HGS-1, was a geosynchronous communications satellite, which was salvaged from an unusable geosynchronous transfer orbit by means of the Moon's gravity.

GSAT-1 was an experimental communications satellite launched aboard the maiden flight of the GSLV rocket. The spacecraft was equipped with instrumentation to test Pulse-code modulation (PCM) transmitting on S-band frequencies and transponders operating in the C-band. The spacecraft was unable to complete its mission after a launch failure left it in a lower than planned orbit and propulsion issues prevented the satellite from correcting this via its own maneuvering system.

An exomoon or extrasolar moon is a natural satellite that orbits an exoplanet or other non-stellar extrasolar body. 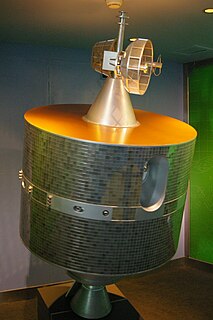 Fēngyún, abbreviated FY, are China's weather satellites. China has launched polar orbit and geosynchronous orbit meteorological satellites since 1988. On January 11, 2007 China destroyed one of these satellites (FY-1C) in a test of an anti-satellite missile. 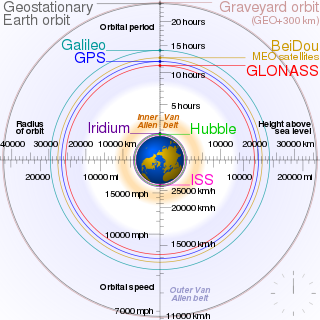 GOES 2, known as GOES-B before becoming operational, was a geostationary weather satellite which was operated by the United States National Oceanic and Atmospheric Administration as part of the Geostationary Operational Environmental Satellite system. GOES 2 was built by Ford Aerospace, and was based on the satellite bus developed for the Synchronous Meteorological Satellite programme. At launch it had a mass of 295 kilograms (650 lb). It was positioned in geostationary orbit, from where it was used for weather forecasting in the United States. Following its retirement as a weather satellite, it was used as a communications satellite until its final decommissioning in 2001.